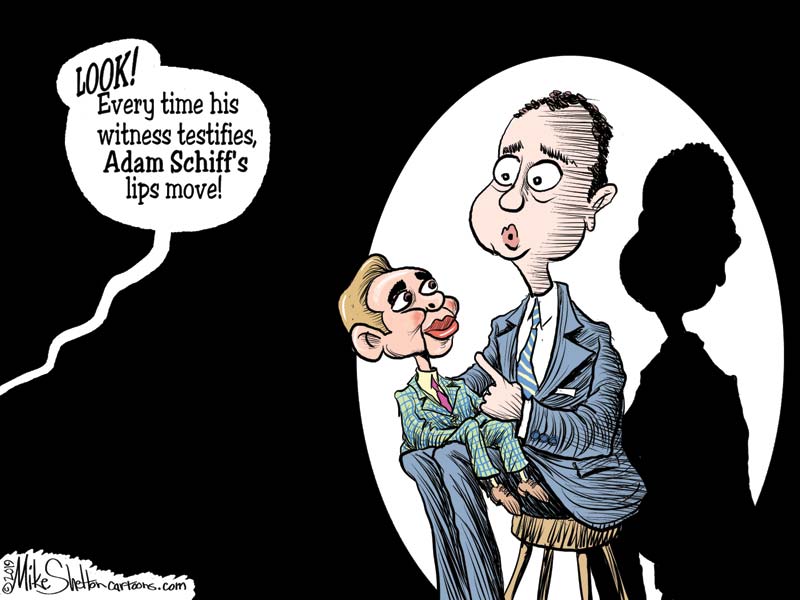 As begin the public phase of their impeachment hearings into President this week -- over a presidential phone call to -- I'm forced to use a dirty word.

If you melt easily, please cover your eyes and ears, or clutch your pearls and gird yourself. Here comes that dirty word:

To a politician, "fairness" is nothing more than a shiv, to be slipped between the ribs with a smile. Politics is never fair. It's not about who deserves what. Politics is the hand, and government is the club in that hand.

So, I propose that, if nothing else, fairness should rule the televised impeachment hearings run by the chairman of the , Rep. , D-

It begins with the "whistleblower."

If the want to be fair about this, two witnesses must be called and sworn in under oath to testify and be questioned by and so that Americans, now focused, can also begin at the beginning.

The first witness should be the so-called "whistleblower," the government employee who brought the complaint to Schiff about that phone call to .

And the second witness should be Schiff himself.

There is no way, really, around this. To do otherwise is to admit that all this is about, really, is overturning Trump's 2016 election, which caused the bipartisan establishment to break out into hives and TV news anchors to cry on air.

Politicians and media play a role, but there's more to it. The American people play a role too. This is their country. They voted. And Trump was elected.

The impeachment of a president a year out from a presidential election, with all the animosity and chaos that would bring, is serious business.

The worry for is that if it is just a partisan exercise, will be seen as a lame addendum to the Mueller Russia collusion investigation, which failed to find evidence that Trump or anyone else colluded with over the 2016 election.

The first witness, ideally, would be the "whistleblower" himself.

It was the "whistleblower" who brought the complaint to Schiff and his committee staff, alleging that Trump had committed an outrage during that phone call to the president of .

Is the whistleblower a heroic patriot fighting against overwhelming odds to save the republic, as insist Or is he a Democratic operative and pajama-boy tool of former CIA boss and Trump loather , as have alleged?

Who is he? What's his name? Does he have allies on Schiff's committee? Why is he doing this?

When you hold hearings to take out a president, you want to know how it all began, don't you?

You might want to read the fascinating and important piece in RealClearInvestigations by . It discusses the "whistleblower" in detail.

If you don't want to read it, then please just admit that all you want is just another steaming platter of "Orange Man Bad" analysis.

After the whistleblower is questioned about Brennan and who he met in Schiff's committee and whether he was indeed booted out of the for partisan leaking, as alleged in the RealClearInvestigations story, then Schiff should take the stand.

And Schiff should testify, under oath, about how all this was orchestrated and what he did and whether he told the whole truth.

If the whistleblower is not compelled to testify under oath, risk a self-inflicted wound. And wounds become dangerous when infected in a swamp.

Trump's call to was clumsy, and it gave his opponents an opportunity. I don't think it was impeachable, but then, you might differ with me. That's OK. I won't cancel you.

It's still OK to have different views in this country, isn't it?

insist Trump was involved in an illicit effort to use American foreign aid to get to dig up dirt about Democratic presidential candidate former Vice President and his son Hunter. They shout "quid pro quo."

insist there is nothing impeachable in the call and that all foreign aid, by definition, is about a this for a that.

They note, correctly, that were playing in in 2016, and that was America's diplomatic point man in that country, even as son Hunter cashed in with a $50,000-a-month gig with a Ukrainian natural gas company.

But all that will come at us from begins with the whistleblower and Schiff pulling the strings. To pretend otherwise is an insult.

Some of you will think that America doesn't deserve what's happening. But think again.

In the great Western "Unforgiven," character explained the facts of life this way:

"Deserve's got nothing to do with it."

The impeachment hearings aren't about what America deserves. This is about what it's always been about: power.