5 reasons why your husband won't talk 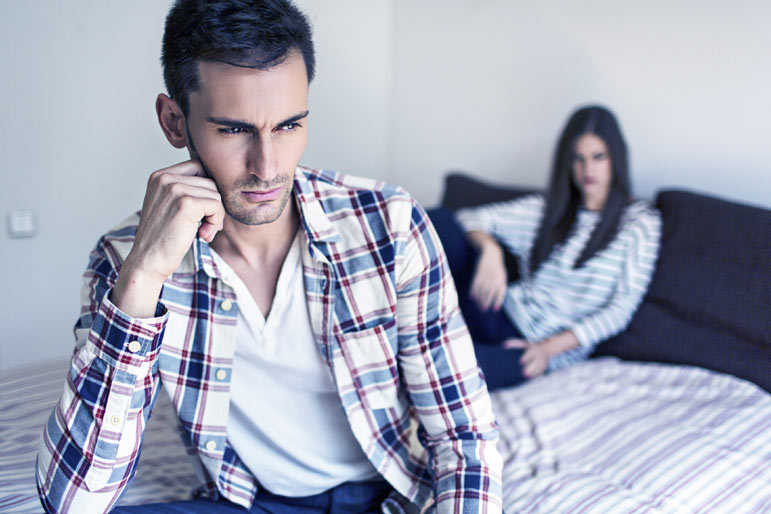 Many, maybe even most, women complain that they can't seem to engage their husbands in a meaningful conversation. There are reasons why this happens. If you want in on the secret, then open your ears and your heart and be ready to learn. Here are five reasons why men are so quiet.

1. You talk too much

It's an affliction that most women are stricken with. It's not your fault - women are born to talk more than men. In fact, most men speak only about 12,000 words a day while most women speak over 25,000. However, that doesn't give women a pass to babble on and not control their natural instinct. Anyone, even eloquent women, can control it. Anyone can learn to "bite your tongue." Of course, there are times when this "gift of gab" can be put to full use, such as at a luncheon with your girlfriends or at a baby shower. Not when conversing with your husband or with other couples. He needs his fair share of time to talk.

We saw the epitome of this at a dinner party one evening. Several couples were gathered around the table discussing different issues. Someone asked one of the guys what he thought about such and such. Before he had a chance to speak, his wife said, "I know more about what he thinks than he does," and off she went on what she thought was his opinion. He whispered to the man next to him, "She doesn't have a clue." Fortunately, someone else, who respected this man, interrupted the wife and said, "Thanks, but I really would like to know what Bob thinks." Bob was pleased and shared an insight that was valuable to all the guests.

You must listen to what he has to say. It's important for him to know that you value his opinion. Ask for it, then let him talk. If he doesn't expound to the degree you would - and he won't - just accept what he gives. If you listen and do your best to understand what he's saying, then he will be more likely to contribute more to a conversation.

One frustrated man, who may be representative of many, said, "I gave up talking to my wife a long time ago. Why would I talk? She doesn't care what I think. She just does what she darn well pleases anyway. So what's the point?" Even if you don't agree with what your husband's opinion may be, hear him out. You just may find out that he has an excellent solution to a problem. Remember there's more than one way to skin a cat. Let him do some of the skinning. You just might find out he has good ideas, too. If you do this he will feel respected by you and that will open the door to even more meaningful conversations.

3. You're too determined to get your point across

One problem women have is that they fear if they let their husband talk, they won't get their point across to him. So they continually interrupt right in the middle of a conversation to make sure she has her say. She comes armed with all the reasons why her point is the best. Wives often talk right over their husbands. By that we mean, if he's sharing something with her she'll pick up on the idea and burst in and take over, sharing her ideas instead of listening fully to his. Who wants to carry on a conversation with someone who does that? No one! Especially your husband.

Along with that, get over thinking you have to be right. That's a very insecure position to be in. Get ready to be wrong. People love people who admit to being wrong and are willing to learn a better way. This reminds us of the statement made by a divorced man who described his first wife. He said, "I finally found Miss Right. I just didn't know her first name was Always."

Keep that in mind and let your honey be right often and you'll enjoy a happier marriage. That doesn't mean you can't be right some of the time. It just means you need to divvy up that right more evenly. Honor his opinions and he'll more likely honor yours.

4. You engage in conversation at the wrong time

Don't expect anything meaningful to come out of a chat in the middle of chaos. By chaos, we mean kids running around interrupting with their wants and needs or other distractions. Find a quiet time when the two of you can enjoy sharing your ideas with each other. That could be over a dinner out, or a walk in the neighborhood. Even sitting on a park bench drinking your favorite smoothie will do the job.

Also, a quiet time in your bedroom works well. With the door shut. Shut doors should mean privacy time. Teach that to your kids, and they won't be busting in on your private conversations as much. When the conversation is less serious it's good for kids to see you sitting together in the living room, visiting about a movie or something you both enjoyed. That can help prepare kids for their own future marriage. They can see that both husband and wife have a say.

5. You don't know what to talk about with him

Too many conversations are only about solving family problems. Though there needs to be time for that, there also needs to be time to talk about more interesting and fun things. To help you initiate a more inviting conversation with your husband consider the following suggestions from a popular marriage site.

What to Talk About:

Although the news, weather, kids, jobs, money, household chores, health issues, in-laws, friends, etc. are all important topics that the two of you really have to talk about, try not to let them be the main focus of your conversations with each other.

The bottom line is, take the time to talk with your husband. Using these points will encourage him to be an active part of the conversation. Letting him talk and listening to what he has to say will make a world of difference in your marriage.

Gary Lundberg is a licensed marriage and family therapist. Joy is a writer and lyricist. Together they author books on relationships, including "Wake-up Call: What Every Husband Needs to Know".