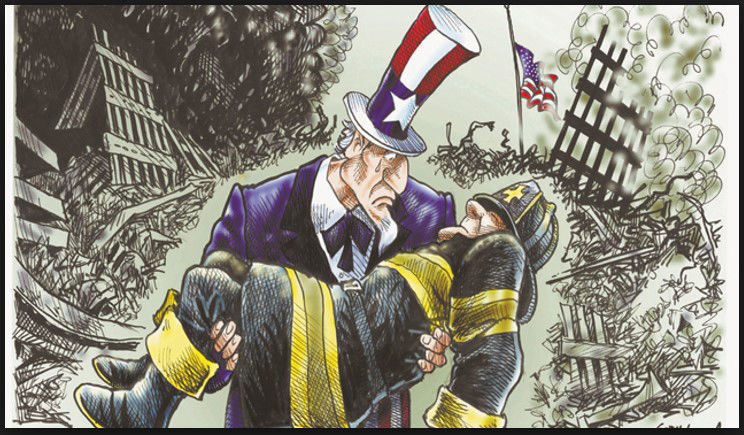 The digital age, for all its beneficial wonders, has left some regrettable casualties in its wake. No loss has been more troublesome for many of us than the decline of print journalism as our principal medium of information.

For all their flaws and variability, newspapers bring a depth of information, a degree of editorial quality control and a capacity for self-correction of errors that is difficult to find in what now passes for "news" journalism.

With that development, we're losing something I have always appreciated almost as much. The political cartoonist, an influential voice in public debates for centuries, is among our most endangered species.

According "Drawn & Quartered," a history of American political cartoons by Stephen Hess and Sandy Northrop, 2,000 editorial cartoonists were employed a century ago; estimates of the number of staff cartoonists working today range from about two dozen to maybe 40.

The famous 1,000-to-1 words-to-picture ratio may be understated when it comes to the political cartoon.

A case can be made that public opinion has, over time, been more often shaped by these artists than by the words of their polemicist colleagues on the nation's editorial pages. A salient political point made with humor can pack more punch than the same idea draped in invective. Many citizens who would not take time for a lengthy essay have learned of an issue or taken a cue from a well-drawn sketch and a clever caption.

I confess that, during my younger days spent in Washington, I read an occasional op-ed - but I never skipped a Herblock cartoon in The Post. If and when the political cartoonist's genre goes extinct, we'll have lost more than an occasional chuckle.

The cartoonist I'll miss most laid down his pen for the Indianapolis Star earlier this year. For a quarter-century, including the eight years I spent in elective office, Gary Varvel, a long-time JWR contributor, delighted and illuminated the fortunate readers of the Indianapolis Star with his craftsmanship and his insight in equal measure.

To someone who can't draw a circle with a compass, Varvel's seemingly effortless ability to capture the essence of his subjects was inexplicable. To someone who was working daily in public life, his grasp of events and clarity of thinking brought, not infrequently, second thoughts or even a change of viewpoint. He will continue to draw cartoons for Creators Syndicate.

Even before newspapers began to homogenize and wither, Varvel was an unusual and especially valuable figure in Indiana life. He carried on the tradition of cartoonists who, at their best, have served a particularly American service by satirizing the pretensions of the political class.

Our greatest cartoonists have reminded us of the foibles, frauds and failures of those imperfect people to whom we entrust power over us. They have helped to maintain the healthy skepticism that protects liberty against its enemies, whether would-be dictators or those who simply consider themselves our benevolent betters.

During the current president's recent trip to Britain, the interest group Led by Donkeys lampooned him with a sarcastic images projected onto buildings and billboards. The group's leader explained, "By laughing at them, you can reduce their power." It's a vital role. A Varvel cartoon almost always poked its fun at those who would infringe upon rather than protect our freedoms.

Though it is a common misconception that the word "nasty" derives from the work of Thomas Nast, who is considered the father of American political cartooning, the myth did ring true. In recent years, public discourse has coarsened unmistakably and drearily, but much political cartooning was already there. For all his great wit and artistic skill, Varvel was always playful, but never cruel.

A Varvel caricature stopped short of ridicule; its caption aimed to make the reader laugh, not smirk. And many times - see his post-9/11 drawing of a weeping Uncle Sam holding a fallen firefighter in his arms (above), or his "Bush Reunion" piece after former president George H.W. Bush joined his wife, Barbara, in death, portraying the couple embracing on a cloud - he made us shed a tear.

The best cartoonists can be appreciated for the smiles, the artisanship or the principled philosophy that usually underlie their oeuvre. One needn't agree with their opinions to appreciate the skill of those who see public debates and participants through more imaginative eyes than our own. That is especially so when their work is drawn in a spirit of genuine humor and good will.

Like the tough copy editors and corrections columns of yesteryear, they'll be hard to replace.

Daniels, a Washington Post contributing columnist, is president of Purdue University and a former governor of Indiana.