The cautionary political tale of Iceland's last McDonald's burger that simply won't rot, even after 10 years 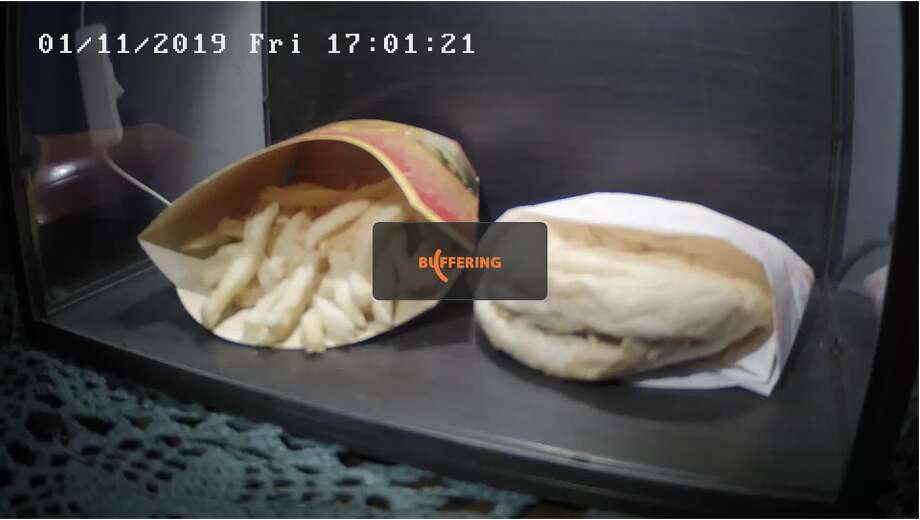 One of Northern Europe's arguably most distinctive exports is "slow TV": real-time recordings of train journeys, ferry crossings or the migration of reindeer, which regularly draw record audiences.

Among perhaps the most successful - and least exciting - examples of that genre is the live stream of a McDonald's cheeseburger with fries. At its peak, it drew 2 million viewers a month. The only element on the screen that moves, however, is the time display.

The burger looks the same way, hour after hour.

As of this week, it has looked like that for 10 years.

Purchased hours before the corporation pulled out of the country in 2009, in the wake of Iceland's devastating financial crisis, the last surviving McDonald's burger has become much more than a burger. To some, it stands for the greed and excessive capitalism that "created an economic collapse that was so bad that even McDonald's had to close down," said HjĂ¶rtur SmĂˇrason, 43, who purchased the fateful burger in 2009. To others, the eerily fresh look of the 10-year-old meal has served as a warning against the excessive consumption of fast food.

McDonald's has attempted to debunk the myth that its burgers do not decompose, arguing there is a scientific explanation for Iceland's never-rotting burger.

"Without sufficient moisture - either in the food itself or the environment - bacteria and mold may not grow and therefore, decomposition is unlikely," a company statement read. (McDonald's did not respond to a request for comment.)

The company may have debunked the myths surrounding the burger's fresh look, but 10 years on, the political symbolism of the corporation's withdrawal from Iceland and the last remnant of its past there appear more relevant than ever.

After a painful recovery, Iceland's economy once again was thrown into turmoil this year when the nation's budget WOW airline went bankrupt. Overnight, a crucial factor in Iceland's recovery - the tourism industry, which now accounts for about 10% of Iceland's gross domestic product - faced a sudden drop in visitors. About a third of them had traveled to Iceland with WOW Air. At the same time, the China-U.S. trade war began to weigh more heavily on the country.

Ten years after a devastating crisis, some Icelanders had deja vu, throwing them back to the days when the nation of around 300,000 witnessed all of its major private banks default.

But in the months since, Iceland's economy has surprisingly rebounded; tourism bookings have remained largely steady, as other airlines have filled WOW Air's gap.

"The economy is doing much better than expected," said Erna BjĂ¶rg SverrisdĂłttir, chief economist of Iceland's Arion Bank, who credited larger central bank reserves and low debt, among other factors.

Iceland was in a very different position in 1993, when McDonald's opened its first restaurant in the country. Rather than focusing on resilience and government intervention - as has been the case since 2008 - Iceland was then laying the groundwork for what would cause the system's collapse two decades on.

It embraced free market ideals like few other countries. The economy boomed.

As free market capitalism produced stunning growth around the world, the sight of world leaders opening McDonald's restaurants became somewhat of a symbol for the victory of capitalism over socialism, just years after the fall of the Berlin Wall.

In Britain, then-Prime Minister Margaret Thatcher became known as an outspoken fan of the corporation.

Meanwhile, in Iceland, images from that time show the country's prime minister, DavĂ­Ă° Oddsson, biting into a burger on the day the company celebrated its first Iceland opening.

"It was a very cheerful moment," said anthropologist KristĂ­n LoftsdĂłttir, who has studied the history of the company in Iceland. The reasons for the country's enthusiasm were deeply rooted, she said.

"Iceland had for a long time been very anxious about its role within the community of nations," LoftsdĂłttir said. With a population the size of a small U.S. city, Iceland was afraid there wouldn't be a place for it on the table of mature nations in the post-Soviet world. The arrival of McDonald's, she said, appeared to indicate a new chapter: Iceland was modernizing and had become "part of a global community," LoftsdĂłttir said.

That success story started to unravel as the financial crisis began in 2007. Within months, Iceland was on the brink of economic disaster. But it took two subsequent collapses for Icelanders to realize just how deep they had sunk into crisis.

The first was the breakdown of the country's banking system.

But it took the McDonald's pullout for the country to be truly humiliated.

Operating in the country had become too costly in the aftermath of the crisis: The currency collapsed; inflation skyrocketed. McDonald's was far from being the only company to abandon the embattled country.

But to some, the chain's pullout felt like being thrown out of the international community they had worked so hard to be part of, LoftsdĂłttir said.

For her book "Crisis and Coloniality at Europe's Margins: Creating Exotic Iceland," LoftsdĂłttir interviewed a number of individuals who witnessed the 2008 crisis. To many of them, the closure of the restaurants was not so much a story about a company laying off its employees, but rather of the collective failure of a nation.

"We cannot even operate a McDonald's," LoftsdĂłttir recalled one exasperated source summarizing a widely shared sentiment at the time.

On Oct. 31, 2009, marketing consultant HjĂ¶rtur SmĂˇrason was among the last customers at the McDonald's in Iceland's capital, Reykjavik. He waited in line in front of the restaurant with other Icelanders who wanted to purchase their last McDonald's meal.

But SmĂˇrason had not come to eat. He had read about online rumors of never-rotting McDonald's burgers and wanted to put the myth to the test. He bought a cheeseburger with fries, drove home and left the box on a shelf in his garage.

Three years went by, in which SmĂˇrason forgot about the souvenir of a bygone era. He had other problems to worry about.

The financial crisis had hit him hard. "I lost all my savings," he recalled. "My clients were going bankrupt. I was trying to hang on to my house."

Three years on, as he was preparing to move to Copenhagen, he came across the McDonald's meal in his garage.

"I was worried about what I would find," Smarason said.

When he opened the box, he was shocked - but not for the reason he expected. Contrary to the rotten remnants he was prepared for, he found what appeared to be a fully intact meal.

Smarason sensed he was holding a historical artifact. He reached out to Iceland's National Museum, where the meal was put on prominent display soon after.

In the years since, some visitors appear to have mistaken it for a fresh meal. Some fries are missing.

The remnants are now on display in a small hotel in southern Iceland, where they continue to attract tourists, Smarason said.

He still visits the burger regularly. The last time he saw it, he said, it looked "as fresh as always."

Only the paper it is wrapped in has started to look a little yellow.