Thanksgiving conversation may be tough to swallow 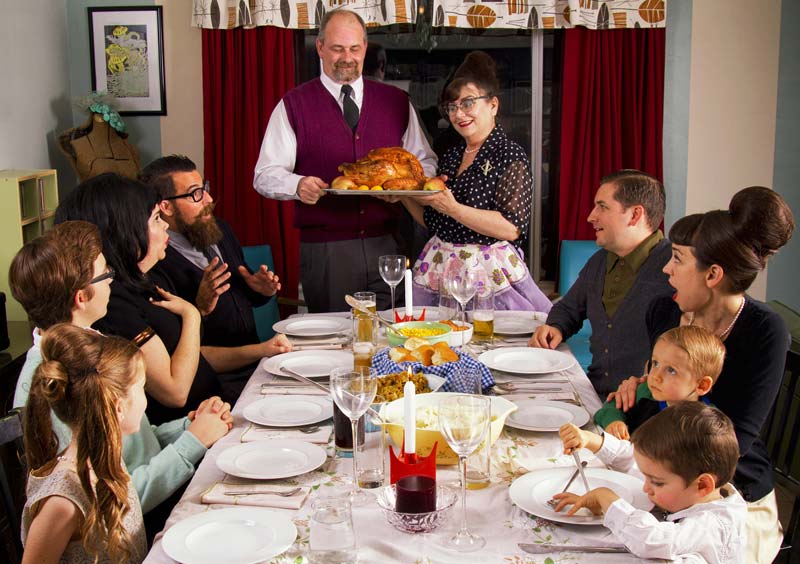 "I'd like to welcome everyone to our Thanksgiving meal. We're so glad you all flew in from around the country. Uncle Jack. Aunt Sally. Cousin Duane. Our daughter Polly and her Russian husband, Vlad, and their new baby, Bennie. Welcome, one and all."

"Now, my wife — you know her as Auntie or Grandma, but I just call her Amazing Angela, haha — has asked that we refrain from any political talk around the table. We all remember what happened last Thanksgiving."

"I can't believe Duane got hit with a casserole dish."

"And my insurance didn't cover it."

"With Medicare for all, that wouldn't be an issue."

"Whoa, whoa, everyone! Simmer down. That's what we're trying to avoid. Which is why this year, Angela has made a list of subjects we're NOT going to talk about. It's under your plates. Angie, you want to read the list out loud?"

"Thanks, Honey. Everyone OK with that?"

"About what? Angela put the kibosh on everything."

"We could pray before the meal."

"Shut up, Vlad, you communist."

"OK, OK! Just a simple prayer. Uncle Jack, you majored in English back in college. How about a few words that won't offend anyone?"

"Sorry. Uh, Dear special force in the universe, we thank you for this food — "

"Which could feed half of Darfur."

"Highest property tax in the state."

"Isn't anyone going to talk?"

"About what? The weather?"

"It's been a mild November."

"Duane, it's a shame your daughter Emma couldn't make it this year. She still at Yale?"

"Anyhow, Emma's still getting her grades. The professors come to her Safe Space and speak softly to her."

"We pay full tuition. They better."

"Can you believe how much money those actors paid to get their kids into college?"

"What do you expect from elitist liberals?"

"A Wealth Tax would pay for everyone to go to college."

"Yeah. We have our First Amendment rights!"

"Amazing how you protect the First Amendment but don't respect the Second Amendment."

"You'll be wanting my gun when illegal aliens take over your town."

"Open borders would make everybody legal."

"You'd love that, wouldn't you Vlad? You Communist!"

"But we haven't finished the meal!"

"I can't eat when people elsewhere are starving."

"I can't eat when everyone around me is so dumb."

"Shut up, Duane, you stuck-up right-winger!"

"Shut up, Jack, you leftist looney!"

"There goes my casserole dish."