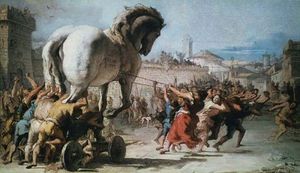 ention the Trojan War and what may first come to mind is the oft-told tale of Helen, wife of Sparta's King Menelaus and possessor of a divinely bestowed beauty, falling in love with Paris of Troy. Their supposed affair and her subsequent abduction from Sparta sparked a 10-year Greek siege of Troy that would shape Greek civilization for centuries to come - at least according to Greek mythology.

For the past several years, archaeologist Elena Korka has been focused on a far less romantic but more concrete legacy of the Trojan War: A lost city named Tenea, reportedly settled by war prisoners brought over from Troy.

Tenea enjoyed an ideal location to the south of the bustling ancient port of Corinth, on the narrow strip of land connecting Greek's mainland and its Peloponnesian peninsula. Against the odds, the city of outsiders "prospered more than the other settlements, and finally even had a government of its own," the Greek philosopher Strabo once wrote.

As legend has it, when the Romans invaded Corinth in 146 B.C. - ultimately destroying the city and beginning their takeover of Greece - Tenea was left unharmed. Still, even Tenea eventually crumbled and disappeared, shadowed in the history books by more consequential ancient metropolises.

For decades, very periodic archaeological finds teased modern-day scholars with evidence of Tenea's existence: An exquisite marble statue of a young man, known as the Kouros of Tenea, was discovered in 1846, just south of Corinth. A sarcophagus containing the skeletal remains of what had been a high-society woman was unearthed in 1984, where Tenea was thought to have stood.

In 2013, Korka and a team surveyed a site in the area and, encouraged by pottery and other small finds, began excavating.

"The concentration of ceramics and architectural remains ... were the reasons that led us to the excavation of the site," Korka said in a guest lecture at New York University last year. "Our ultimate goal was not just the unearthing of [an ancient theater purported to be there] but rather the discovery of evidence which would help us to find remains of the settlement of ancient Tenea."

The excavation produced some extraordinary artifacts. Last year, the Greek Ministry of Culture announced that the team had found a trove of riches while digging up what had been a dual-chambered burial ground at the Tenea site, as Newsweek reported:

Five of the most well-appointed tombs, the experts said, would have belonged to wealthy inhabitants of Roman Greece. Bodies were found alongside elaborate gilded bronze leaves, a golden ring, precious stones and gold and bronze coins from the surrounding region.

Among the other ritualistic items buried with the dead were perfumes, artifacts made of gold, gold foil and elaborately crafted glassware, as well as items of pottery.

Also within the dig site, the archaeologists recovered items from a series of different burial plots. Fourteen graves, organized in circles, as was Roman convention, yielded a number of gold and silver coins, vases and a series of lamps, the most striking of which bore depictions of the Roman goddess Venus and two cupids.

Still, real and tangible proof of Tenea as a settlement - structures beyond graves and gemstones and coins - eluded archaeologists. Until now.

The Greek culture ministry announced Korka's team had found "proof of the existence of the ancient city" of Tenea. An image of the excavation site released by the ministry depict stone walls, the remains of what were likely houses from the settlement nearly 3,000 years ago.

Korka, now Greece's director of antiquities and cultural heritage, told the Associated Press they had identified distinctive door openings, walls and floors, as well as unearthed additional pottery spanning the 4th century of the Common Era to late Roman times.

The discovery is yet more evidence of Tenea's unique position as a bridge between Greek and Roman cultures.

"The city of Tenea presents a tantalizing fragment from the long history of ancient Corinth and testifies to the supreme artistic achievements of the Greco-Roman civilization," Korka wrote for NYU last year. "Its remains and findings served many purposes, one of which was to create spaces that could be read simultaneously according to Greek and Roman cultural codes, spaces where seeing both would eventually make sense."