Welcome to the Hotel Brexifornia 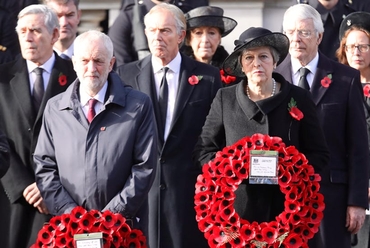 The people of the United Kingdom face a political choice between Jeremy Corbyn, who is sincerely appalling, and Theresa May, who is insincerely appalling. Corbyn doesn't like the Queen, the union, the army, the Jews; on the other hand, he's quite partial to the IRA and Middle Eastern terrorists. And, somewhat to his credit, he's either not very good at pretending otherwise or disinclined to do so. Mrs May, by contrast, is a shifty dissembler. Who knows what, if any, are her genuine beliefs - or even if she's capable of recognizing such a concept.

Nevertheless, it is some considerable achievement for a Tory leader to have inflicted more damage on the nation than a polytechnic Trotskyite would. In June 2016, when David Cameron went flouncing off into the post-referendum sunset, Mrs May seized the prime ministership under a characteristically evasive battle-cry of "Brexit means Brexit".

Two-and-a-half years on, Brexit means anything but Brexit. The Spectator has a grim hit parade of the Top Forty horrors to emerge from the PM's "deal" with Brussels. Sample quote from her triumphant "agreement" with the Eurocrats:

As I said months back: Welcome to the Hotel Brexifornia. You can check "Out" any time you like, but you can never leave.

Note, too, that the "transitional" period could theoretically last forever, a supposedly sovereign state has no right to withdraw from it, and what would be an obviously inequitable contract under English law instead comes solely under "European law". This is a divorce agreement that appoints your ex-husband as the family-court judge. Britain would be, from the viewpoint of Mrs May's team, an EU protectorate in perpetuity and, from the viewpoint of Brussels, a vassal state. Neither counts as Brexit.

I'm a "no-deal" man, if only because that's preferable to a deal conducted on the basis of Wrestlemania - "where the fights are fake but the injuries are very real". Also over at the Speccie, the former Aussie PM, Tony Abbott, has his three-ha'porth on the subject, and likewise comes down on the side of no deal. Within the conventions of prime ministerial collegiality, he is withering about what Mrs May hath wrought:

The referendum result was perhaps the biggest-ever vote of confidence in the United Kingdom, its past and its future. But the British establishment doesn't seem to share that confidence and instead looks desperate to cut a deal, even if that means staying under the rule of Brussels. Looking at this from abroad, it's baffling: the country that did the most to bring democracy into the modern world might yet throw away the chance to take charge of its own destiny.

That last point is worth reiterating. London has written the constitutions of more sovereign states than anybody in history. The constitution of Mr Abbott's country is an act of the British Parliament, no more or less. So is the constitution of my own country. So too those of Barbados and Papua New Guinea and Mauritius and dozens of others. As I occasionally mention, a decade or so back I received from a retired colonial civil servant in Wales an e-mail with the enviable opening line, "Having helped write seven constitutions..."

Yet we are now expected to believe that the Mother of Parliaments, the "mother of the free", is incapable of midwifing its own restored sovereignty. There is nothing in British history to compare to the quivering paralysis of the last two years.

By the way, under British nationality law, there is nothing to prevent a Commonwealth citizen sitting in the UK parliament, and many have done so. Granted, it has been a while since one of Her Majesty's overseas subjects served as Conservative leader and prime minister (my compatriot Bonar Law in 1922), but the Tories could do far worse than install Tony Abbott in Downing Street on a drive-thru no-deal platform.