Parties may be swapping core constituencies 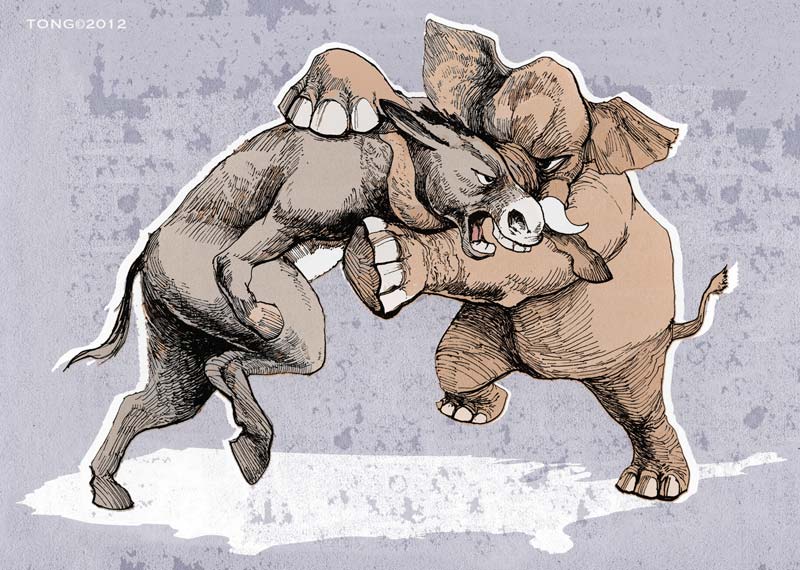 CHESTERTON, Ind. - For decades, this town in the steel-producing northwest corner of Indiana has voted reliably Democratic, a pocket of blue in a reddening state. Barack Obama carried surrounding Porter County in both 2008 and 2012.

Yet in 2016 Porter went for Donald Trump, one of 206 such Obama-Obama-Trump counties nationwide.

There's been a lot of talk about the Democrats' hopes of flipping upscale, moderate GOP suburbs this year, but counties such as Porter, many of them heavily white working-class, are also crucial.

Indiana Democrat Joe Donnelly cannot keep his seat in one of the closest Senate races in the country unless men and women here come back to blue. In a state Trump won by 19 points in 2016, and where the president has a 53 percent job approval rating in the latest Ball State University poll, Donnelly needs a big margin in the northwest - "the region," as it's known.

The question, evident at a raucous rally of the United Steelworkers union on a recent Monday night in Chesterton, is exactly what message can regain this once-reliable constituency when unemployment in Indiana is negligible, Trump has granted the steel industry protective tariffs and many working-class voters harbor doubts about the national party's stances on social issues.

"Some of you might not like what I'm about to say. That's just too damn bad," union president Leo Gerard scolds his rank and file. And then comes the punchline: "I believe Dr. Ford!"

It's the labor leader's attempt to vouch for Donnelly on what may be his greatest point of vulnerability: his "no" vote on Brett Kavanaugh's nomination to the Supreme Court.

Donnelly, born in New York but an Indianan since college and law school at Notre Dame, is an old-fashioned retail politician with a knack for casting complex issues in understandable human terms. He represented the north-central section of the state in Congress for three terms before beating Richard Mourdock, a tea party Republican who had upset incumbent moderate Richard Lugar in the GOP primary, for Senate in 2012. Donnelly may be the most conservative Democrat in the Senate, an avowed "pro-life" legislator who has earned past "A" ratings from the National Rifle Association. He brags of voting for a border wall and, in the final days of the campaign, refused to rule out a law to change birthright citizenship.

Yet Donnelly's opponent, pro-Trump businessman Mike Braun, has the Kavanaugh vote to depict Donnelly as someone who's a liberal when it really counts.

Addressing the steelworkers, Donnelly mentions neither Kavanaugh nor Trump. He sticks to the main Democratic talking point: health care, and past GOP efforts to repeal the Affordable Care Act.

"What kind of people don't want their fellow citizens to have health care?" he asks, to loud applause.

Afterward, Donnelly treats me to an extended discussion of the soybean farmers' plight and tells me that before "the region's" people "were ever Trump voters they were Joe Donnelly voters." He expects them to appreciate his votes in favor of Trump's court picks, including Justice Neil Gorsuch.

Braun's victory over two sitting congressmen who opposed him in the GOP primary has extended an anti-establishment mood in the state party that began with Mourdock. Braun unequivocally embraces the president and told me in a brief Indianapolis meeting that voters will see through Donnelly's attempt to "disguise his voting record."

"With the president's double-downed focus on firing up the Republican base, my concern is how many moderate Republicans will be lost - voting Democrat or not voting at all?" says Jim Brainard, the Republican mayor of Carmel, a booming community of 92,000 just north of Indianapolis.

Braun seems unfazed. Just a few days after the massacre at a Pittsburgh synagogue, I asked him to respond to those who linked the violence to Trump's rhetoric.

"Most people in this country are liking his agenda," he says. "When it comes to his style and so forth, I think a lot of folks are still trying to get over the '16 election, and it shows in how they relate to the president."

The 2018 election is a contest between the two parties overlaid on a clash within each of them. Before our very eyes, the parties may be exchanging core constituencies, as suburbanites trend blue and industrial workers trend red. Joe Donnelly and Mike Braun are both trying to ride the crosscurrents.