Jim Acosta, on a peacock's crusade, wins because of Trump's appointed judge 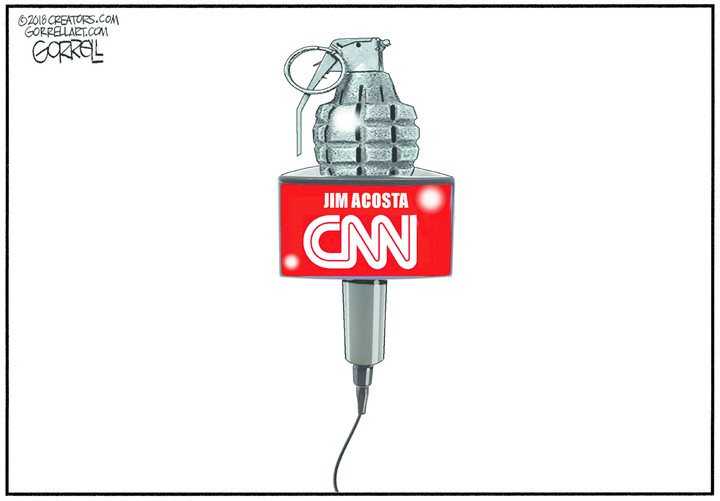 That a grandstanding show pony like would be transformed by President into a First Amendment crusader knight is perhaps a sad but fitting comment on our age.

Acosta is back at work, isn't he? And, as correspondent, he'll be able to ask questions the president doesn't like. That's the important thing. That and the .

I backed Acosta, and so did many other journalists, because of the conservative principle of the thing.

But there is something else here that shouldn't be ignored.

U.S. District Judge , the judge who ordered the Trump administration to reinstate Acosta, is a Trump appointee. He is also a member of the conservative .

That's the same routinely bashed by the left, and is most decidedly on the left. The general thrust of the argument against the is that it has vetted prospective federal judges who would be servile rubber stamps for the Trump administration.

Wrong. Kelly just proved it to be wrong.

The use of the federal judiciary as a partisan hammer isn't the conservative view. And naturally, it isn't the view, either.

Conservatives ask that make law, and that federal judges interpret those laws in accordance with the original intent of the of .

But the left's view is the opposite. The left wants federal judges to make laws that the left couldn't pass through .

What happened in Acosta's case is that a conservative judge simply followed the law, Trump or no Trump.

In granting a temporary restraining order and restoring Acosta's press pass, giving him regular access to grounds to cover news conferences and other events, Kelly noted, "I want to emphasize the very limited nature of this ruling."

Acosta praised Kelly for the ruling.

"I want to thank all of my colleagues in the press who supported us this week," Acosta said. "And I want to thank the judge for the decision he made today. Let's go back to work."

That's what I called for a few days ago: To let Acosta go back to work because the was wrong.

But as he goes back to work, I'd assume Acosta will avail himself of shining armor and polish it. My hope is that as Acosta prances forth, producers will follow behind him clapping hollow coconuts together, as in some skit of old.


I don't like how Acosta handles himself at news conferences, but that's a function of showbiz, not news. He puffs himself up and acts as if he's the story. But in the of old, when it was respected as a neutral news source, CNN Washington bureau chief Frank Sesno wouldn't have tolerated the Acosta peacock act.

Acosta forgets that his job is to report the news, not play the peacock.

Much of TV news is showbiz and partisan echo chamber, and there are no signs of returning to a semblance of what had been.