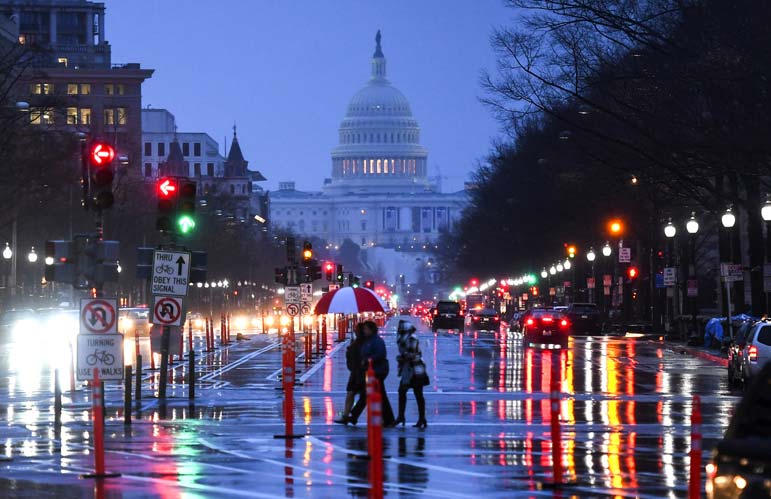 WASHINGTON - A narrowly divided nation might deliver another jolt to Congress in today's midterm elections, following several other course corrections that have created the equivalent of political whiplash.

If Democrats seize the House majority, it will mark the third time in 12 years that the chamber switched control, a level of voter volatility not seen since just after World War II.

Although the Senate is expected to remain in Republican hands, voters have already sent that chamber whipsawing back and forth in recent elections. Over the past 18 years the Senate majority changed hands four times.

That's how often the Senate flipped majorities in the previous 45 years.

This era of heightened competition and narrow majorities has, so far in this young century, created the opposite dynamic.

It has driven the two parties farther apart on the biggest issues of the day, including immigration and health care, and instead of reaching across the aisle, congressional leaders have retreated into their partisan corners. Almost no one is expecting divided government, if House Democrats win today, to produce any major accomplishments in the two-year run-up to the 2020 presidential elections.

Most independent analysts expect the House and Senate margins to be incredibly narrow, which will prompt everyone's first focus on trying to retain - or flip - the majority in their direction.

It's not surprising that Americans keep changing their minds given how close our presidential elections have been: In 18 contests since 1948, Republicans have won the presidency 10 times, Democrats have won eight times, and two of those GOP victories came as their nominee lost the popular vote.

The result has been long stretches of divided government, in which one party controls the White House and the other controls at least one of the two branches of Congress. Since Bill Clinton won his first presidential campaign in 1992, Democrats have had just four years of total control of Washington, Republicans just six years - the remaining 16 years have pitted the president and Congress against each another in split control.

The result does not have to be gridlock. In 1996 and 1997, Clinton brokered big deals on welfare, the budget and a children's health insurance program with a Republican-controlled Congress. In the prior decade, President Ronald Reagan cinched a deal to extend Social Security funding with a Democratic House and Republican Senate.

In the months leading up to the election, McConnell blocked consideration of President Barack Obama's Supreme Court nominee.

Laws and disorder: Congress is dominated by party leaders and functions as a junior partner to the executive

Each House and Senate leader starts off a new Congress believing he or she can retain - or win over - the majority in their chamber and charts a course to do so. In modern politics that means, first things first, driving up the energy of liberal or conservative base voters, which by definition makes bipartisan compromise more difficult.

"We have become far more focused on base politics than general politics. Base politics calls for an entirely different strategy," former Senate majority leader Tom Daschle, D-S.D., said. "Base politics, almost by definition, is exclusionary. It's majority-ism at its highest."

Daschle spoke in the late summer in an interview for a joint investigation by The Washington Post and ProPublica that examined decades of congressional voting records and other data, revealing a sharp decline the past decade in terms of rank-and-file involvement in the day-to-day work of Congress.

The data, mined by ProPublica's Derek Willis, showed a sharp drop the past 10 years in both the House and Senate in terms of the freewheeling debate that used to occur 20 to 30 years ago.

One of the biggest culprits, according to Daschle and more than a dozen other experts, was the fear of taking tough votes that would lead to 30-second gotcha ads during campaigns in the general election. Each side, during their stints in the minority, would try to come up with tough amendments that would draw political blood.

Seven years ago, Senate Republicans began pushing for a vote on a proposal to slash health-care benefits for members and staff of Congress; House Democrats have tried to force votes on protecting young undocumented immigrants.

The Senate's two faces: A day marked by bipartisan achievements and character attacks

This polarized atmosphere drove Congress into a place it has not been since the late 1940s, during the Truman and later Eisenhower presidencies.

Washington then settled into a 40-year run of mostly political stability, with Republicans dominating the presidency and Democrats the Congress.

The expectations of that era made compromise easier. House Republicans never had more than 192 seats, 26 short of the majority. Senate Republicans claimed the majority just once, after Reagan's 1980 landslide, and then lost it during the "Six-Year Itch" midterm of 1986.

But the 1994 midterm elections, Clinton's first, thrust Republicans into power and set in motion a political realignment that is still taking hold today.

Gone are the once powerful white southern Democrats who ran committees overseeing the Pentagon and the federal purse strings, replaced by conservative white Republicans who view coastal liberals with disdain.

Cultural wedge issues are now dominating recent elections, not an economy that has registered 97 straight months of job growth.

Newt Gingrich, who in 1995 became the first GOP House speaker in 40 years, started the mentality of the permanent campaign, and Karl Rove mastered the concept of driving out conservative voters overseeing George W. Bush's presidential campaigns. Honing modern technology, Obama's campaign advisers built a new liberal coalition in their victories in 2008 and 2012.

Now, that mentality has come to dominate congressional campaigns and the legislative agenda as well.

"Base politics, at its heart, is what's driving much of the mentality around the way legislation works," Daschle said.