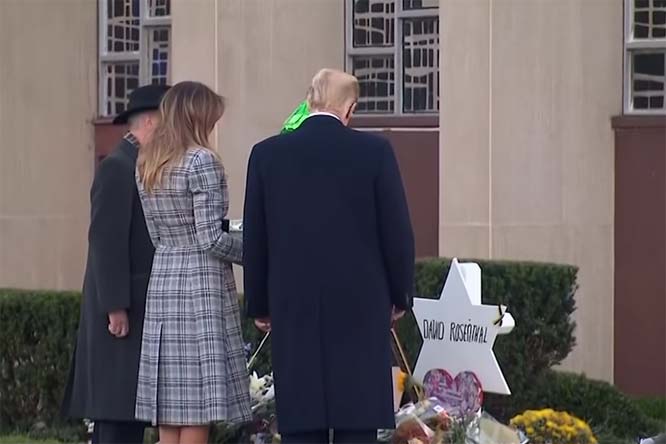 Just hours after the largest massacre of Jews in America in US history, the Atlantic Monthly posted a piece by Franklin Foer. In his “Prayer for Squirrel Hill, and for American Jewry,” Foer wrote, “Any strategy for enhancing the security of American Jewry should involve shunning [President Donald] Trump’s Jewish enablers. Their money should be refused, their presence in synagogues not welcome. They have placed our community in danger.”

That is, in the shadow of the blood drenched synagogue, Foer declared war on his fellow Jews.

Foer wants them all to be ostracized because, he says, they are dangerous.

Taken to its logical conclusion, Foer’s statement was also a declaration of war against the Jews of Israel. For as much as Foer and his totalitarian comrades hate Trump, Israeli Jews support him. More than 75% of Israeli Jews consider Trump a great friend.

Foer’s comrade Julia Ioffe from GQ magazine made clear the animosity these leftist/anti-Trump American Jewish media figures harbor toward Israel. In a post on Twitter that was at least as incendiary as Foer’s essay, Ioffe wrote, “And a word to my fellow American Jews: This president makes this [massacre] possible. Here. Where you live. I hope the embassy move over there, where you don’t live was worth it.”

In other words, Trump’s support for Israel enables him to persecute American Jews. By supporting Trump for supporting Israel, Israeli Jews and Republican Jews enabled the massacre at the Tree of Life Synagogue.

Are they right? Do Israeli Jews and politically conservative American Jews facilitate antisemitism in America by supporting Trump? Is Trump an antisemite who covers his malign intentions toward American Jewry by supporting Israel?

Although these questions are absurd on their face, now that The Washington Post’s Dana Milbank feels comfortable claiming that Jews are not safe in Donald Trump’s America, it is important to consider them.

So let us consider what Trump has done and said and compare his actions and statements with those of his immediate predecessor, Barack Obama, who most of the American Jews who now blame Trump and his Jewish supporters for the massacre in Pittsburgh supported.

The first question we need to address is, what are Israel’s interests in its relations with the US and how do those interests impact American Jews?

Israel has an interest in working in alliance with the United States to counter common threats.

Trump shares this interest, and has acted to advance it on multiple fronts.

Trump’s decision to abandon his predecessor’s policy of appeasing Iran in favor of a policy of working with Israel and the Sunni Arab states to counter Iran’s regional aggression and power, and block the regime’s efforts to acquire nuclear weapons, represents a fundamental shift in US foreign policy. It was welcomed by Israel as well as by the Sunni Arab states of the Middle East.

Is this a good or bad thing for American Jewry?

Obama’s nuclear deal gave Iran a guaranteed path to nuclear armament within a decade. Since the Iranian regime has repeatedly pledged to annihilate Israel, the deal posed an existential threat to Israel.

To secure Senate approval – or rather, to avoid Senate disapproval – of his scandalous deal, the Obama White House directed a media and political strategy of intimidation of lawmakers and American Jewish leaders, abounding with antisemitic demonology. Democratic senators that opposed the deal were under the influence of nefarious “foreign money.”

The Obama administration’s aggression against Jewish Americans exercising their lawful right to petition their government was unprecedented. The fight it waged against the American Jewish community left the community weakened and vulnerable to attack from the Left as never before.

By disavowing the nuclear deal and endorsing the view of the Jewish community, Trump delegitimized Obama’s bigoted assault against American Jews.

Obviously, this is a good thing for American Jews.

Israel has an interest in securing its position in the world and ending its second-class status in the international community. That second-class status was long emblemized in the US’s abject refusal to locate the US Embassy in Israel to Israel’s capital city Jerusalem. That longstanding American refusal to recognize Israeli sovereignty over the City of David legitimized the systematic persecution of Israel at the UN and in other international arenas.

Since Jerusalem has been the center of Jewish life and faith for 3,000 years, it is concrete proof that Israel is not a colonial implant and that Jews are the native people of the land. By refusing to recognize Israel’s sovereignty in Jerusalem, the US joined the rest of the world in calling into question its very right to exist and lend credence to the antisemitic claim that Jews are foreigners in their historic homeland.

Contrast Trump’s actions with Obama’s actions. Not only did Obama refuse to transfer the US Embassy to Jerusalem, he rejected even symbolic acceptance of Israeli sovereignty in Jerusalem. The Obama State Department erased all the captions on archival photos of American dignitaries in Jerusalem that referred to the location as Jerusalem, Israel. This petty act demonstrated a deep-seated hostility to the history of the Jewish people and was nothing if not bigoted.

Yet, by the lights of Foer, Ioffe, Milbank and their fellow American Jewish Trump-haters, Obama was a friend of American Jews, and Trump and his Jewish supporters are their enemies.

Likewise, Trump’s decision to remove the US from the congenitally antisemitic UN Human Rights Council which Obama joined despite its open bigotry against Jews; his ending of funding to the genocidal, antisemitic UN Refugee Works Agency for the Palestinians (UNRWA), which Obama expanded; and his decision to cut funding to the terrorist-financing Palestinian Authority – which Obama increased – and close the PLO diplomatic mission in Washington – which Obama upgraded, were moves of historic significance in the fight against antisemitism and for Jewish rights. Trump is the first president in a quarter century to make the Palestinians and their international enablers pay a price for their rejection of peace and facilitation of terrorism and armed aggression against Israel and Israeli Jews.

Are these actions bad for American Jewry? When Trump says that Israel has a right to defeat its enemies and respond to aggression, is he harming American Jewry?
Of course not.

TRUMP’S JEWISH antagonists in the US media and their partner, ADL executive director and former Obama White House official Jonathan Greenblatt, insist that under Trump, antisemitic incidents in the US have risen 57%. But as David Bernstein demonstrated this week at Tablet magazine, the ADL data everyone is citing tells the exact opposite story. The claim that antisemitic incidents have risen under Trump is not supported by the ADL data.

What the data do show is that violent antisemitic attacks in the US have decreased significantly since Trump took office, while they increased significantly during Obama’s presidency. And as the blogger Elder of Zion noted this week, the data show no causative relationship between either administration and the level of antisemitism.

What is clear is that Trump has spoken far more seriously about antisemitism and the need to combat it than Obama ever has.
In January 2015, an Islamic terrorist massacred and held Jews hostage at the Hyper Cacher kosher supermarket in Paris. Obama refused to acknowledge that it was an antisemitic attack and that the victims were killed because they were Jews. Instead he referred to them as “a bunch of folks in a deli.”


Following Saturday’s massacre at the Tree of Life Synagogue in Pittsburgh, Obama issued a statement that once again made no mention of the fact that the victims were Jews, and that they were killed because they were Jews.

“All of us have to fight the rise of antisemitism and hateful rhetoric against those who love, love or pray differently. And we have to stop making it so easy for those who want to harm the innocent to get their hands on a gun,” he emptily tweeted.

Trump in contrast, couldn’t be clearer in his condemnation of antisemitism and his willingness to defend Jews from bigotry and violence.

Saturday, after calling the synagogue massacre “an antisemitic act,” Trump said, “Antisemitism and the widespread persecution of Jews represents one of the ugliest and darkest features of human history. The vile, hate-filled poison of antisemitism must be condemned and confronted everywhere and anywhere it appears. There must be no tolerance for antisemitism in America or for any form of religious or racial hatred or prejudice.”

As Prime Minister Netanyahu noted, no non-Israeli leader has ever made such a strong commitment to fight Jew-hatred.
This then brings us back to Foer and his fellow Jewish American Trump-haters.

What are they trying to protect as Jews when they call for Trump to be shunned and his Jewish supporters to be kicked out of Jewish life in America?

The answer is blindingly clear.

No Jewish interest is served by standing against the friendliest president American Jews have had. No Jewish interest is served by weakening the president most supportive of Israel in the history of US-Israel relations. Indeed, far from serving the American Jewish community, these Jewish Trump-haters are harming the community and endangering its future.

After watching these powerful American Jews abuse Trump for standing with Israel and standing up to the antisemites at home and abroad, no future president will have any impetus to even pay lip service to the US alliance with the Jewish state and the fight against Jew-hatred.