Will House Dems help or hurt the party's chances of winning in 2020? 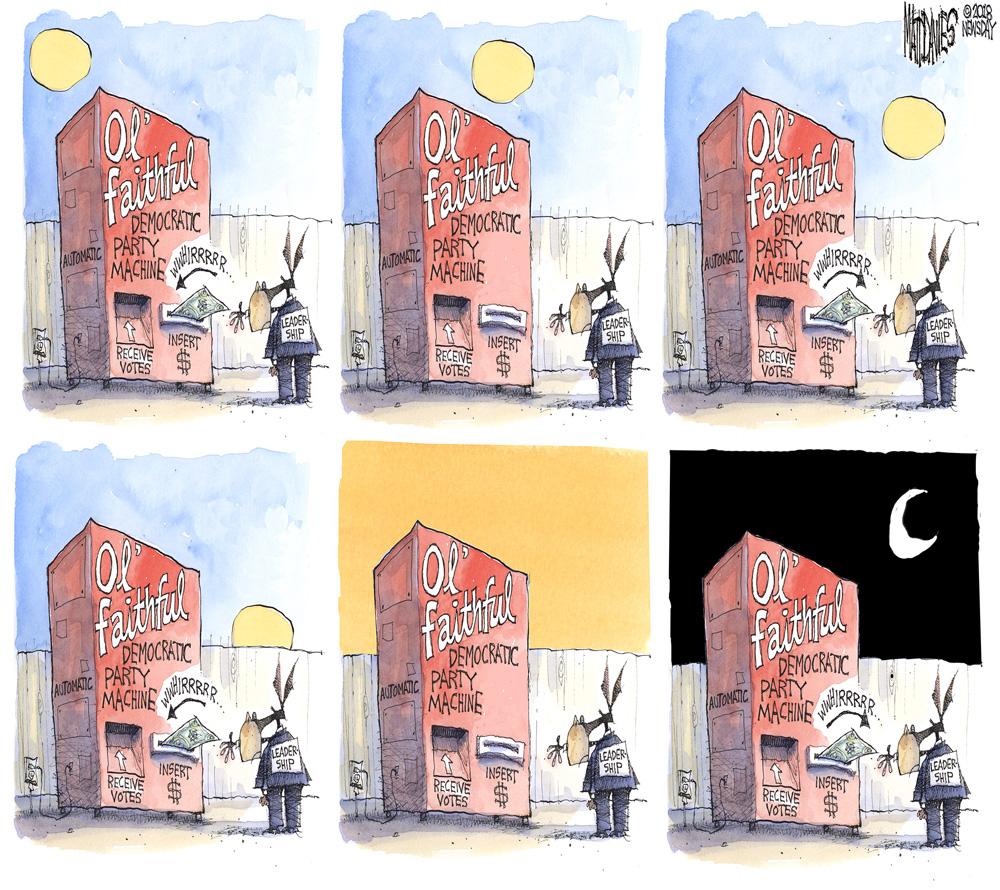 The first important event of the 2020 presidential cycle will not take place in Iowa or New Hampshire. It will not be the first round of fundraising reports next spring or spikes on the applause meter at the first few cattle calls for prospective Democratic candidates. Instead it will unfold in the nation's capital in the test of wills between the leader of the new Democratic-controlled House and President Donald Trump.

That leader could well be Nancy Pelosi, the current House minority leader and former House speaker. She was the star of many Republican ads run during the election this fall and a favorite foil of the president. She is said by Republicans to be a toxic political figure to the GOP base. She is also a tough and shrewd politician and a skilled legislator who led her party to victory last Tuesday.

Her post-election moves have signaled no concern on her part that she will not be elected speaker. The day after the election, she held a news conference immediately after the president's encounter with the White House press corps. She followed that with a prime-time interview on CNN and with steps and announcements about House business. She continues to be the face of a Democratic Party that now has power to confront the president in ways they could not during the past two years.

Pelosi plays her cards close. The moment of truth for those in her party who would like not to see her as speaker will come soon. As early as this week there could be a better indication of just how real the threat to her bid for speaker is. At this point, there is no challenger who has stepped forward, only names bandied about. Her allies continue to express near-total confidence that she will prevail. The coming days will reveal whether she underestimates the desire for new leadership in a new House.

No matter the outcome of the leadership elections, what the Democratic leaders do with the power they now have could enhance the chances of the party's 2020 presidential nominee of winning the White House, or it could diminish them and give Trump a head start on reelection. There is precedent for the latter that provides lessons for the new Democratic majority in the House.

At this moment 24 years ago, Newt Gingrich was the king of Washington, the giant killer who had ended 40 years of Democratic rule in the House. The Georgia Republican had the whole of center stage, in Washington and nationally, with power and a Contract with America that he was determined to implement. Then-president Bill Clinton was a politically battered and diminished figure in the aftermath of that 1994 midterm election.

A year later, things looked far different. Gingrich got drawn into a standoff with Clinton over the budget, which resulted in a government shutdown, for which he and his party got most of the blame. He was caricatured in a New York tabloid as a crybaby after complaining about not being able to talk to the president during a flight on Air Force One. His speakership took a hit, and the collateral damage turned out to be Bob Dole's hopes of defeating Clinton in the 1996 election.

Dole, then the Republican leader in the Senate and the front-runner for the GOP nomination, found himself through the whole of 1995 as a hostage to Gingrich and the rambunctious House Republicans. He was strapped in for the ride with Gingrich and had no ability to separate himself.

By the early spring of 1996, the Democrats launched an ad blitz linking Dole and Gingrich that left a permanent impression on the electorate, the "Dole-Gingrich monster," as Scott Reed, who was Dole's campaign manager in that campaign, called it.

"It was the demonizing of Newt, and Newt taking that bait," he said. Reed suspects Trump will find something different in Pelosi, if she is the speaker starting in January. "I think Pelosi is a lot smarter and more polished and understanding of the job," he said. "She's had the experience in the job, and she understands the back and forth with the president and the White House."

Pelosi has set out an agenda for House Democrats, starting with a package that would include reforms in campaign finance, voting rights and government operations. The agenda includes health care and infrastructure. On health care and infrastructure, the president might be prepared to deal with the Democrats, a mutually beneficial coming together that could happen if the stars align.

But it's the other part of the Democrats' agenda that will complicate the relationship with Trump, as he made clear in his post-election news conference. House Democrats will have the power to exercise oversight of the administration, which the current Republican majority has failed to do. How far and how aggressively it goes is the question that will set the tone for the next year, perhaps more. Trump warned of total war if Democrats go down that road, without specifying his red lines.

Pelosi has been careful and cautious in her comments about the investigative powers, particularly on the question of opening an impeachment inquiry. She has been in regular communication with the lawmakers who will oversee the key committees. She has said repeatedly that there should be no effort to impeach a president for political reasons.

If special counsel Robert Mueller comes forward with a report that involves crimes or constitutional violations, the House almost certainly would move to impeach. But it is the gray area in between oversight of this or that agency and an investigation focused on the president that will require the exercise of judgment by the leader of the Democrats in the House.

What no one can predict at this point is the pressure Pelosi, if she is speaker, and other top Democrats will feel from a grass-roots base eager to see the president taken on directly. Republicans with experience on Capitol Hill predict that the pressure on Democrats to move against the president could be overwhelming.

One noted that many Democrats say they have to be careful not to overreach and likened that to Republicans who had said shutting down the government was not a good idea. "Then they got 5,000 calls a day from constituents and they did," he said. "It's hard to think that Democrats are not going to be captive to that."

Pelosi knows her caucus, which has been her greatest strength as leader. But the midterm election was a reminder that the party's grass-roots supporters now have significant power. Whether that manifests itself as a left version of the Freedom Caucus in the House remains to be seen, but what has been stirred up in opposition to the president will be felt by House Democrats in the coming months. As one Republican legislator said of Pelosi, "She has to avoid becoming a foil in Trump's re-election bid."

First, however, she must fend off a challenge within her own ranks. Her allies say she is ready for these challenges, from within and from the White House. They will amount to the biggest tests of her long career.