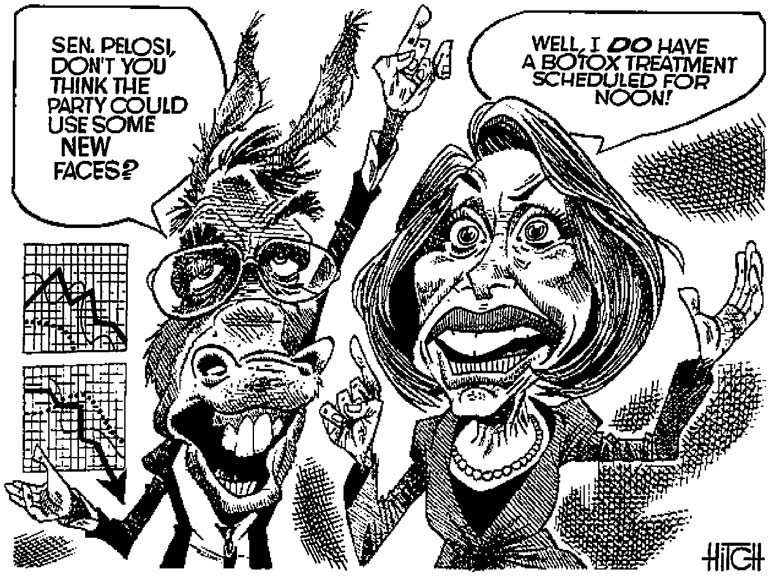 WASHINGTON - Insurgent lawmakers, unyielding despite pressure from their own party, spurn leaders in an open show of defiance on the national stage.

Democrats have seen this scenario too many times on the Republican side, and as they eagerly look ahead to controlling the House, they see echoes of the GOP's internal strife in a brewing effort in their own ranks to block Rep. Nancy Pelosi, Calif., from becoming speaker.

The Democratic dissidents are so far nowhere near as well organized as the House Freedom Caucus, the roughly three dozen conservative hard-liners who frustrated the GOP leadership and blocked legislation, but they are threatening to use similar tactics.

Pelosi's opponents are threatening to withhold their votes on the House floor even after an anticipated party vote nominating her as the next speaker. That is a page straight out of the Freedom Caucus playbook - used to deny Majority Leader Kevin McCarthy, Calif., the speakership in 2015.

Top Democrats are warning rank-and-file members not to go down that road, underscoring a growing backlash to the anti-Pelosi faction.

"I'll ask everybody to take a look at the so-called Freedom Caucus and see where they got the Republican Party," Assistant Democratic Leader James Clyburn, D-S.C., said Tuesday. "I think they're the ones that got them into the shape they're in now."

The warnings come barely a week after Democrats won a sweeping victory in the midterm elections that put them in position to elect a speaker and claim committee gavels in January for the first time since 2007. While votes are still being counted, Democrats are on track to win anywhere from 35 to 40 seats - their biggest single pickup since the post-Watergate election of 1974.

Many Democrats credit Pelosi, 78, whose hefty fundraising and disciplined message on health care propelled the party to victory.

"Nancy Pelosi has proven herself as a first-rate legislator," said Rep.-elect Donna Shalala, D-Fla., the former health and human services secretary. "We would not have Obamacare without her."

But with greater power comes greater tension inside the caucus. Not only are a handful of Democratic incumbents insisting on new leadership despite the electoral gains, several of the incoming lawmakers say they won't back down from campaign promises to install a new speaker.

In 2016, dozens of House Democrats opposed Pelosi in an internal party vote only to vote for her on the floor. Around a dozen Democrats set to vote this time around - with the speakership actually at stake - say they won't fall in line.

Rep. Seth Moulton, D-Mass., a leader of the anti-Pelosi faction, rejected the GOP comparisons. "The Freedom Caucus is trying to break government," he said. "We're just trying to get new leadership."

A critical test may come later this week as Democrats consider an internal rule change to raise the threshold vote for nominating a speaker candidate from a simple majority to 218 votes. The change is expected to fail, in a boost for Pelosi.

In 2015, the Freedom Caucus played a key role in forcing out Republican Speaker John Boehner, Ohio, by threatening to call a vote on his removal. Rather than put vulnerable lawmakers in a difficult spot, Boehner quit.

McCarthy, as the No. 2 leader, was the obvious heir apparent, but conservative hard-liners saw him as too much like Boehner - an establishment-minded operator without a strong interest in conservative policy. So they coalesced behind a stalking horse, Rep. Daniel Webster, Fla., and promised as a bloc to stick with him - thus denying McCarthy the absolute majority he would need on the House floor.

Less than 24 hours later, McCarthy withdrew his speaker bid, and the Freedom Caucus was emboldened to make demand after demand under the compromise choice, Paul Ryan, Wis.

"Different principles, but in terms of the tactics . . . you can really make a difference," said Rep. Warren Davidson, Ohio, a Freedom Caucus member who saw a resemblance between his group and the anti-Pelosi faction.

The Democrats who are plotting against Pelosi base their objections almost entirely on politics, not ideology or policy.

Where the conservatives wanted their leaders to adopt tough positions on issues such as immigration and government spending, the Democrats mainly want Pelosi to move on, fearing she is a drag on candidates in competitive districts. Meanwhile, longtime incumbents are eager to move up the leadership ladder.

"People can compare it any way they want to," said Rep. Filemon Vela, D-Texas. "We're a committed group, and we're working together, and I'm 100 percent confident we've got the votes to start the next cycle with a new leader."

But to Pelosi's supporters - and to those who may not count themselves as loyalists but also don't want to see a schism - there is little tolerance for splinter factions of any sort.

"When you're in the majority, you have the responsibility to have a plan," said Rep. Dan Kildee, D-Mich. "What I don't want is to have our caucus so conditioned to the way a minority party functions that we don't really think about the consequences of all the choices we make."

Clyburn, who is in a contested race for House majority whip, said he would "resist anything that would be destructive to our caucus" - including a potential floor fight over the speakership.

In a boost for the current leadership, 155 Democrats, including newly elected members, signed a letter Tuesday endorsing Democratic Whip Steny Hoyer, Md., to be the next majority leader. "We will need a steady, experienced leader over the next two years, who also works to empower our Members and prepare them for future leadership opportunities," they said of Hoyer.

Small groups of legislators using their leverage is nothing new, of course - especially to Pelosi, who dealt with several ad hoc groups that formed to shape major pieces of legislation the Democrats moved in 2009 and 2010, when the party controlled the House, Senate and presidency.

But none emerged as a persistent thorn in the side of the broader caucus in the way that the Freedom Caucus has for Republicans. And Democrats are happy to keep it that way.

In the days since the Democrats' sweeping victory, lawmakers and liberal groups have spoken up in praise of Pelosi - her legislative skills, her fundraising acumen and her groundbreaking status as the first female speaker - but a few have added sharp warnings against internal divisions.

In a letter to Democratic colleagues Monday, Rep. Elijah Cummings, Md., who is expected to be named chairman of the Oversight and Government Reform Committee, cautioned against "a self-destructive leadership battle" that would "only play into the hands of House Republicans and President Trump." The winner of the party vote, he said, ought to be elected speaker on the floor in January.

"Our new members promised their constituents to bring stability and common-sense to a dysfunctional Washington - not to be drawn into an effort to throw the House into chaos," he wrote.

The party's left wing, traditionally organized around the Congressional Progressive Caucus, is getting an infusion of young new members, including high-profile Rep.-elect Alexandria Ocasio-Cortez, N.Y., who are angling to take a more active role - one that some have suggested could resemble a left-wing Freedom Caucus.

Ocasio-Cortez, who floated the idea of a smaller, more resilient progressive caucus "of 10 or 30 people" in an interview this summer, has not talked much about it since then. But on Tuesday, she rallied with climate change activists who protested at Pelosi's congressional office

She encouraged the activists to keep up the pressure, but after the protest tweeted her appreciation of Pelosi for relaunching a select committee on climate change, something Pelosi had promised before the protest.

"What we need to show her is that we're here to back her up," Ocasio-Cortez said.