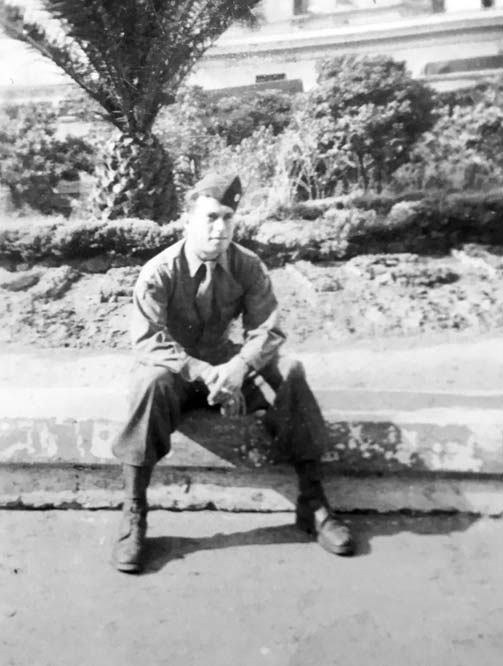 Who's a victim and who's privileged? Some of us find this current conversation confusing. Quite a few millionaires view themselves as victims while others who are poor, if white or Jewish, are seen as privileged.

My dad wasn't confused. He didn't feel a victim even though he grew up poor and hungry. At 12, he worked after school to help his mother, whom his father had divorced and left without support. He frequently encountered anti-Semitism as he grew up and later, in the army. He couldn't afford college even with the GI Bill.

He didn't see himself a victim but felt privileged to fight injustice. One his first fights was against Murder Incorporated.

He encountered them originally when he was about 12, sitting in a Brooklyn barbershop near the corner of Amboy and Pitkin. The barber wrapped a hot towel around his face. He relaxed and closed his eyes. There was another man in the chair next to him, his face completely wrapped in the towel.

Suddenly, a man ran in and murmured something in the barber's ear and then looked at my dad. "Hey, that Harold's kid brother. Get him out of here."

The barber ripped the towel off his face, pushed him and whispered, "Get out! Leave!" My father stared at him incomprehensibly. What could the barber mean?

The barber literally lifted him out of the chair and dragged him to the door. "Quickly! Out!" He himself ran out the back.

My dad, bewildered, hurriedly walked out the door and down the block. What on earth was the barber thinking? As he reached the corner, he heard a car squeal to a stop and then a rat-tat-rat. Turning, he saw men on a car's running board. With machine guns in hand, they sprayed the windows of the barbershop, aiming for the man that had been next to him. The people on the street fled, running into nearby stores or down side streets. My dad fled with them, silently thanking the barber.

My dad was lucky. In the late 1920's, Murder Incorporated, among other crime organizations, controlled many Brooklyn's streets.

Several years later, my dad apparently forgetting his escape from the barbershop, encountered Murder Inc. again. He grew irritated by the unwritten rule to step off the sidewalk, allowing them to pass. His older brothers grilled him on this point. "Do you want to get beaten up?" my Uncle Joey scolded.

It wasn't that my dad was a smart aleck or hated authority. He just had a strong sense of right and wrong, and in his view, organized crime was wrong. He believed in the American dream, though he lived in a Brownsville tenement.

My dad saw no reason to step into a dirty gutter. And one day he just didn't. Three men strode down the sidewalk, the other side-walkers moving aside. My dad's heart beat wildly; he hesitated a moment. Then with a greater bravado than he felt, he continued walking, forcing the men to break ranks and walk around him. One man turned back to look at my dad's face.

Late that night, my Uncle Joey and Uncle Harold came in and shook my dad awake. He slept on two chairs pushed together in the kitchen. "What did you think you were doing? We met some guys who were going to wait for you after work and you would've been found in the gutter for sure!" My dad, now awake, grinned.

"Natie, don't you remember that afternoon at the barber's when these hoods shot up the place? These people don't fool around and you'd better remember that!" My dad's grin faded. "Save your bravery for when it really counts." And he did.

My dad considered Nazis to be larger and more ruthless versions of Murder, Inc. He turned down a stateside job and officer's training to arrive in Europe sooner to fight the Nazis. He fought on the front lines as a forward observer for 3 1/2 years.

He told me cleaned up war stories at bedtime.

"After the war was over, my battalion was stationed in Naples to guard the port where GI's were being sent home. My battalion stayed while other soldiers, overseas for less time, went home. Through army gossip, I found out our new commander told the Major that he had been overseas for 3 months. The commander didn't mention that our battalion had been overseas for three and one-half years. My friends hatched a plan that I'd take a jeep to army headquarters and tell the Major. I drove all day and was actually admitted to the Major's office, told my story and our battalion was slated to leave in two weeks!"

However, my dad had left base without permission. "My commander put me in the brig for going AWOL. He wasn't happy with me anyway. But my buddies heard about it and petitioned the Major." He released my dad, who became quite a hero on the homebound ship!

Dad didn't tell me this story to show he was a hero but to illustrate that anyone could fight injustice. Proud to be born in America, he didn't feel the country owed him anything --- quite the opposite. He voted in elections, marched in Veteran's Day Parades and was thankful for opportunities that came his way. He worked too hard to have time to worry about privileged or entitled folks or be devastated if his candidate didn't win. And during my childhood, of utmost importance to him, was his ability to provide for our family, prevent us from ever going hungry or without needed clothes, for us to have a bedroom and a real bed, and, crucially, have enough to help others, which he did regularly.

Today, some wealthy, famous and powerful Americans say they aren't proud of this country, that it offers no opportunities for the poor or the underprivileged. What rich irony that these entitled individuals create victims of themselves, while my dad thought himself rich, a winner of the American Dream.

Previously:
• Up Against The Wall
• Idiot Proof sukkah Building
• Who's Buried in Grant's Tomb? An Unlikely Story of Transformation and Repentance
• Healing and Cooking
• Celebrating denial?