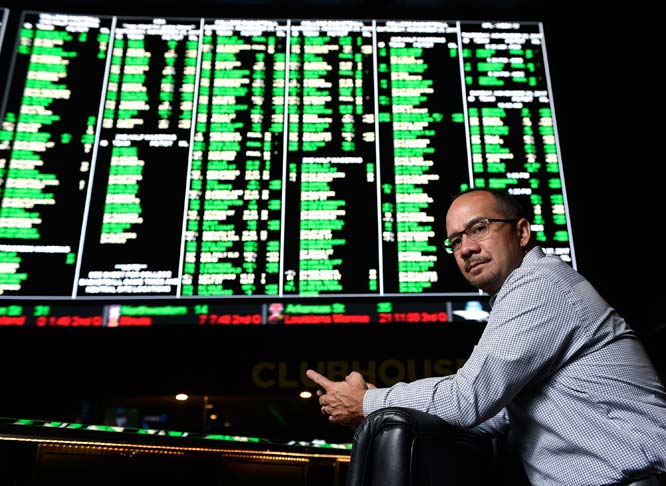 But only one thing can prompt him to stop what he's doing and look up: a loud cheer from the throng of bettors gathered at the Westgate Las Vegas Resort & Casino, which houses the largest sports betting operation in the world.

"Usually," he says, "cheering is not good for us."

Despite the sign that the bettors might be (temporarily) winning, business is good for the casinos. So good, in fact, that other states desperate for tax revenue want the Supreme Court to break Nevada's monopoly on the sports betting industry.

Early next month, the court will consider an attack by New Jersey on the federal law prohibiting additional states from getting into the business. A decision that strikes down the law would "be a dam burst," said Kevin P. Braig, an Ohio lawyer who specializes in sports law.

The case is a titanic clash between states that want a piece of the action - New Jersey is supported by 18 other states - and the NCAA, the National Football League, Major League Baseball and other professional sports leagues. They contend the federal ban is necessary to protect the integrity of their games.

At stake: an underground sports betting economy estimated in the United States to be worth at least $150 billion a year and as much as $400 billion.

And yet the case is about even more than that.

It presents the justices with a rare opportunity to define the limits of federalism and the meaning of the 10th Amendment, which says that "the powers not delegated to the United States by the Constitution, nor prohibited by it to the States, are reserved to the States respectively, or to the people."

The immediate question is whether Congress can force states to maintain prohibitions on sports gambling. But a broad ruling for New Jersey could have consequences for other ways that the federal government tries to push policy preferences on state officials.

The decision "could have repercussions in areas that go well beyond sports betting: gun control, immigration, sanctuary cities," according to Daniel Wallach, a Fort Lauderdale, Florida, lawyer who specializes in gaming and sports law. "It is the most important federalism case the Supreme Court has heard in many, many years."

Outgoing N.J. Gov. Chris Christie, R, initiated the fight years ago to help the state's flailing casinos and its race tracks. After voters approved a referendum in 2011 to allow sports betting, Christie signed a law authorizing it and dared the federal government to "try to stop us."

This has led to a battle in the lower courts, with New Jersey represented by former Bush administration solicitor general Theodore Olson and the NCAA and the leagues retaining Olson's former deputy and eventual successor as solicitor general, Paul D. Clement.

New Jersey has lost at every stage, with courts repeatedly upholding the Professional and Amateur Sports Protection Act (PASPA) of 1992. But as a sports bettor would say, throw out the record books now that the case is at the Supreme Court.

To understand why New Jersey and other states are so interested in sports betting, head to the corner of Paradise Road and Elvis Presley Boulevard in Las Vegas on an NFL Sunday. The action at Westgate begins at 7 a.m.

It boasts of the largest LED video wall in the world. Hundreds of bettors gather before 28 giant screens. The serious bettors settle into cushy leather lounge chairs in the SuperBook area. What Kornegay calls the "jersey and cargo shorts" gather at Football Central, a giant auditorium where every NFL game is being broadcast. Greeters hand out maps so the spectators can find seats with the best views of their favorite teams.

Football betting accounts for about 40 percent of the casino's sports betting action, he says, but one can bet on practically any sporting event in the world at Westgate. As the NFL crowd cheers, horse race bettors sit quietly before their individual screens at what look like library carrels.

It's football that draws Nick M. Spirtos, who's in a box with his son and two of his son's friends. The day before, Spirtos bet $1,000 on each of six college football games and had a good day.

Now he was back and has placed a series of second-half bets: whether the Packers would be outscored, for instance, and the total scoring in another contest.

He grew up around gambling in Southern California - his father placed bets with a bookie - and says betting makes sports more entertaining.

"The NFL wouldn't exist if gambling didn't exist," says Spirtos, who works as director of gynecologic oncology at the Women's Cancer Center of Nevada.

While Spirtos says he bets only in person, about 40 percent of sports bets are now placed on mobile apps that operate only within the state, Kornegay says.

He is fine with sports betting expanding to other states, he says, so long as it is strictly regulated. "There's no safer place to make a wager than the state of Nevada," he says. "We have regulations and policies in place to protect both sides of the counter - to protect us and to protect the consumer."

Kornegay says it is as important to the casinos as it is to the sports leagues to make sure sports are clean, he says. "We don't think people are going to bet into something they think is predetermined."

It was to protect the integrity of the sport that Congress passed PASPA. It made it unlawful for a government entity to "sponsor, operate, advertise, promote, license, or authorize by law ... a lottery, sweepstakes, or other betting, gambling, or wagering scheme" 0n competitive sports.

The law grandfathered in Nevada's bookmaking operations, as well as existing sports lotteries in Delaware, Montana and Oregon. Importantly, it gave the rest of the states a one-year window in which to initiate sports betting, a provision specifically to benefit Atlantic City casinos. But New Jersey did not act.

When the state tried, in 2012, courts shot down the attempt, and the Supreme Court declined to get involved.

So the state tried a different tactic, following up on a passing comment from the U.S. Court of Appeals for the 3rd Circuit. While New Jersey could not authorize sports betting, the court said, nothing in the federal law prevented the state from repealing laws that imposed criminal penalties on the practice. So New Jersey tried that, but lower courts said the state's intention was the same prohibited activity.

This time, though, over the opposition of the U.S. solicitor general's office, the Supreme Court was apparently intrigued.

The court accepted New Jersey's request to decide if a federal law that prevents repeal or modification of a state law impermissibly "commandeers" the regulatory power of the states.

New Jersey relies on the Supreme Court's most important case to date on the subject, 1992's New York v. United States. The court struck down a federal plan to address the lack of radioactive waste storage sites by, in part, directing states to provide for the disposal of waste generated within its borders.

Justice Sandra Day O'Connor, writing for the court, said the federal government could not simply direct states to carry out a federal regulatory program "to govern according to Congress' instructions."

New Jersey argues that is exactly what PASPA does.

But the sports organizations say there's a big difference between New York and the sports betting case: PASPA does not require states to take any affirmative action to implement a federal program. The law "does not compel states (or state officials) to do anything," the organization's brief to the justices states. It simply prohibits them from authorizing sports betting.

As far as the argument that PASPA treats states differently, the leagues point out New Jersey and other states had the chance to approve sports betting during the one-year window Congress opened, and chose not to.

No one argues that PASPA has curbed sports betting.

And New Jersey and other states accuse the leagues of hypocrisy. Even as the National Basketball Association fights New Jersey's efforts, league commissioner Adam Silver has called for legalizing sports betting. Baseball has invested in one of the leading components of sports betting, fantasy leagues. A pro hockey team, the Vegas Golden Knights, has its home in the epicenter of sports betting, and the NFL's Raiders will begin playing there when a new stadium is completed.

At a recent Capitol Hill symposium sponsored by Sportradar, a global consultant to sports organizations, the eventual expansion of legal sports betting was discussed as a given, even if the outcome of the Supreme Court case was not.

"Who are we protecting?" asked Ted Leonsis, owner of the Washington Capitals and Washington Wizards. "What are we afraid of in moving to a regulated, transparent system?"

As for the justices, the pair of attorneys specializing in sports law - Braig and Wallach - are betting differently.

"I would still make the leagues 2-to-1 favorites to win on the merits," said Braig. "That's how they've won it every time."

But Wallach noted the court's interest in questions of state and federal sovereignty and the fact that the justices accepted Christie v. NCAA despite the law of disagreement among lower courts and the opposition of the Justice Department.

"I really believe that New Jersey is the prohibitive favorite," he said. Wallach predicted the court's decision will mean "we are faced with a choice of either gambling limited to New Jersey or full-on sports gambling before the end of the calendar year 2018.