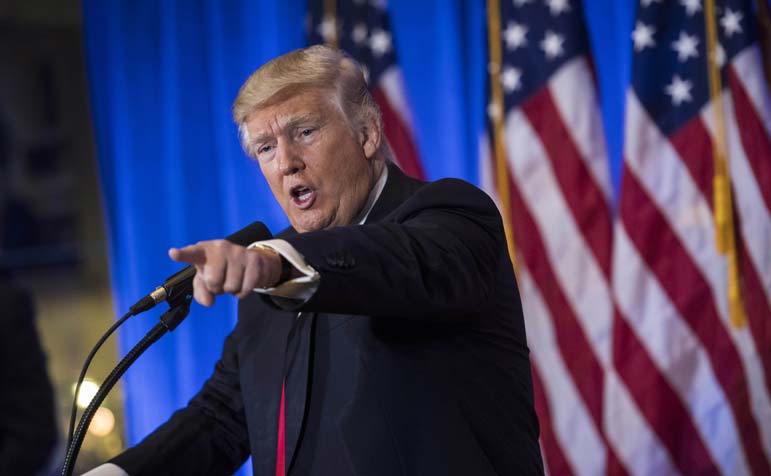 The least interesting question about the Donald Trump presidency is why he doesn't trust the judgment of America's spy agencies.

It comes up every few weeks. Trump will tweet his disdain for one of Barack Obama's former intelligence leaders. He will belch out a weird conspiracy theory from time to time. But mainly this phenomenon concerns Trump's comments about Russia's role in meddling in the election he won.

The latest example was from Saturday. Trump met with the Russian autocrat, Vladimir Putin. After the meeting, Trump told the press that he believes Putin when he says he didn't meddle in the election. (Trump later tried to clarify his remarks, saying he meant to say he believes that Putin himself is sincere when he says this.)

Now let's stipulate that it's terrifying Trump appears to take the word of a former KGB colonel at face value. Putin is a geopolitical predator who has burned the last three American presidents who tried to work with him. It's a national embarrassment that Trump keeps showing Putin a respect he clearly hasn't earned.

What's more, Trump does not need to trust any information from America's spy agencies to ascertain the basic fact that Russia interfered in the election. Anyone who has paid attention in recent years could have seen this coming. Do we need intercepts and intelligence reports to notice that Russia's propaganda network, RT, had a head start in publishing emails hacked from prominent Democrats during the election?

Let's start with the 2016 election. It's true that Trump during the campaign displayed a disturbing sycophancy when it came to Putin. Russia's president seemed to be the only world leader the candidate wouldn't criticize. And that was unprecedented. But it was equally unprecedented for so many former intelligence mandarins -- who served presidents from both parties -- to openly campaign against him.

Remember this Nov. 3, 201,6 op-ed from the former CIA Director Michael Hayden: "Trump Is Russia's Useful Fool." Then came a scolding from former deputy CIA Director Michael Morell and the former undersecretary of defense for intelligence Mike Vickers. They bluntly said Trump couldn't be commander-in-chief if he kept saying all these sweet things about Putin. Both men served as advisers to Hillary Clinton's campaign.

So it's a "the chicken or the egg" problem. Since early in the campaign, Trump violated political norms by openly praising an American adversary. This prompted former intelligence leaders to violate norms by openly engaging in electoral politics.

Then there is the period right after the election. That's when an opposition research dossier, generated by a firm that took money from Russian-connected interests to campaign against human-rights sanctions on Russia, was circulating around Washington. It turns out that the opposition research was paid for in secret by the Democrats. It was a hodgepodge of rumor, innuendo, reporting and probably some accurate information. Former FBI Director James Comey felt compelled to disclose the existence of this dossier in briefings for both Trump and the outgoing President, Barack Obama.

We all know what happened next. Armed with that tidbit, CNN published a story about the dossier being briefed to the current and incoming president. A few hours later, Buzzfeed got hold of the mysterious document and published the whole thing. It birthed a story line that has dogged Trump since his inauguration.

Of course Trump has made all of this worse on himself. His aides lied about their past contacts with Russians. Trump himself urged Comey to go easy on Michael Flynn, his national security adviser, who resigned after details of his intercepted phone calls in the transition with the Russian ambassador were leaked to The Washington Post. Then Trump of course fired Comey, after he confirmed to the public the ongoing FBI investigation into Russian meddling and possible collusion with the Trump campaign.

Perhaps Trump is doing all of this because deep down he knows he is guilty. But I've always thought it was a stretch to imagine Trump would be capable of keeping such an enormous secret. This is a man who won the presidency in large part because he was willing to say and tweet just about every thought that popped into his head. We will soon know much more from Robert Mueller, the former FBI director conducting the Justice Department probe (someone Trump has hinted he would also like to fire).

So it shouldn't be a surprise that Trump doesn't trust the intelligence community. A better question is why so many Democrats and journalists do. It was only three years ago that many Democrats called for CIA Director John Brennan's head after the Senate Intelligence Committee learned his agency had been spying on Democratic staffers conducting oversight of the CIA's "black site" program during the George W. Bush administration. It was an ugly episode.

The CIA filed a crimes report against some of the staffers on whom it spied. In the end, Sen. Dianne Feinstein, D-Calif., the Democratic chairman of that committee, live-tweeted a Brennan press conference to correct what she saw as his misrepresentations about the agency's history of torture in the first years of the war on terror.

Then there is the former director of national intelligence, James Clapper. Clapper told that same Senate committee in 2013 that he knew of no U.S. programs that wittingly collected the call records of Americans. Unlucky for him, a few months later, former contractor Edward Snowden leaked documents to the Washington Post and the Guardian that discredited that statement. For years it haunted Clapper. Politicians from both parties called him a liar, which is a bit unfair because if Clapper had told the committee the truth in open session he would be revealing what was, at the time, a state secret.

Somehow this recent history seems to be forgotten by anti-Trump forces eager for allies. The Trump era has been very good to both of their reputations. Today Clapper and Brennan are regular guests on Sunday morning talk shows where they offer quips and commentary about the latest disgraces of the current commander-in-chief.

This is not that normal. With a few exceptions, like in 2011 when U.S. special operations forces and the CIA killed Osama bin Laden, the public and its representatives have largely distrusted the intelligence community. Some of this was not warranted. In moments of panic, Americans ask our spies to prevent the next attack. And indeed, most of the intelligence community's success is never made public. And yet its failures fuel news cycle after news cycle of political outrage. When the moment of panic passes, there is oversight and second-guessing.

It's been this way for a while. Since Watergate, the intelligence community has largely taken a public beating. From the oversight hearings in the 1970s that disclosed CIA assassination plots and other dirty tricks to the failure to accurately gauge Iraqi weapons of mass destruction before the 2003 war, spy chiefs are routinely assigned blame, sometimes fairly and sometimes as scapegoats.

In the era of Trump, the scapegoats are star witnesses against the president. Is it any wonder that the president doesn't trust them?