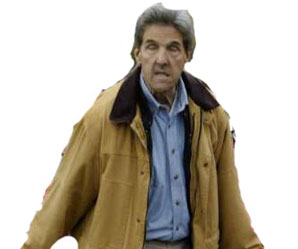 John Kerry has some advice for Donald Trump this week on his presidential visit to Asia: Calm down the rhetoric.

In an interview with CNN's Christiane Amanpour, the former secretary of state said the president should stop "feeding into North Korea's fear of regime change, or of you know -- a unilateral attack."

"I think the rhetoric to date has frankly stepped over the line with respect to the messages that are being sent," Kerry said. "It's given North Korea a reason to say 'Hey we need a bomb because if we don't have a bomb, we're going to - you know - not be able to protect themselves and they'll come after us.' "

It's worth lingering over that last sentence. Perhaps Kerry was too focused on the Iran nuclear deal to notice, but North Korea already has a nuclear bomb.

It first tested a nuclear device underground 11 years ago in 2006. It tested again on May 25, 2009. That one was hard to miss. It came just seven weeks after Barack Obama delivered his famous speech in Prague sharing his vision for a world without nuclear weapons. The North Koreans tested three more times during the Obama presidency, all during Kerry's tenure as secretary of state. Is that because Obama fed into the regime's fear of regime change? Was his policy of "strategic patience" spurring Pyongyang to keep perfecting atomic weapons?

Of course not. Nonetheless, on Monday in Japan, Trump repeated his administration's policy that the "era of strategic patience is over."

That was a bipartisan era. Presidents Bill Clinton, George W. Bush and Obama all pursued a policy of pressure and negotiations urging North Korea to pause its nuclear program. The North Koreans used this period to perfect a nuclear device and advance a missile program that would give them the means to deliver it.

The real danger of Trump's rhetoric is not that he will spur North Korea to build apocalyptic weapons as an insurance against American aggression. It is that Trump's inartful threats from earlier this year will reveal America to be a paper tiger. Remember Trump said in August that North Korea will be met with "fire and fury" if it continued to threaten America or its allies. North Korea has continued its threats, and there has yet to be fire or fury.

Given the likely casualties of a military confrontation on the Korean peninsula, this is a good thing. The danger is that boy tyrant Kim Jong Un, not to mention the leaders in China, won't take Trump's more calibrated threats against North Korea seriously.

Despite his tough talk in Japan, Trump also told CNN this weekend that he did not see it as a sign of weakness to sit down with Kim. This is from the same president who tweeted that his secretary of state, Rex Tillerson, was "wasting his time" trying to restart negotiations with Kim, whom he called "little rocket man."

With Trump it's hard to distinguish between improvised flourish and deliberate strategy. It would be good though at this point if Trump sticks to his initial skepticism toward negotiations. Talking with North Korea has only bought time for the regime to perfect its nuclear weapons. Kerry apparently hasn't yet noticed.