The truth about dead turkeys and human living 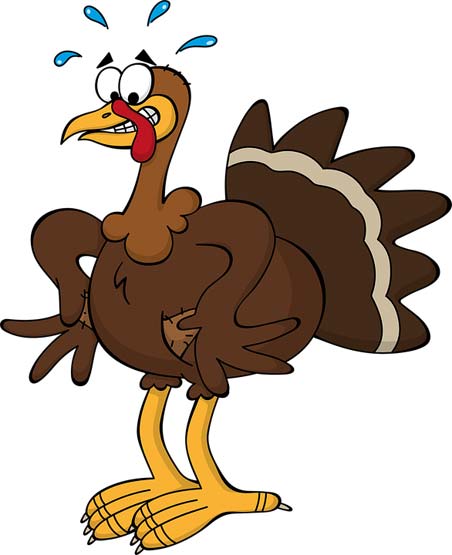 And so, once again, the feast of gratitude for the gifts of Providence -- profiteroles, procreation, Prokofiev, the profession of faith, the prospect of progress, procrastination, Proverbs, and Providence (Rhode Island ) itself, I was there last week, a very snazzy town -- and also for tragic mistakes you might've made and did not and here you are, basically OK , with a slab of turkey and cranberry and a gravy lake in your mashed potato . It's a good place to be.

Of course I am sorry about those millions of turkeys, the miserable lives they led, imprisoned, deprived of basic rights, and I am sorry about the undocumented workers who had to slaughter and clean them at minimum wages so that our young people would be free to post on Facebook their grievances against the world, but face it: Those turkeys had reached their intellectual peak and were not going to have great careers and it was merciful to kill them and not put them into nursing homes to wind up on life support.

And for us Americans, something about turkey says, "Thank you, Lord, for your abundant mercy, undeserved though it be."

Kale does not say that. It just plain doesn't.

It's a great country. Take a train sometime and see for yourself.

We are not at war. The economy is worrisome but it always has been: Worry is what economists do for a living.

Longevity is getting longer.

People read books, more than ever.

They still know the words to "The Battle Hymn of the Republic," even the verse about building Him an altar in the evening dews and damps and the flaring lamps.

So let us come before His Presence with thanksgiving and make a joyful noise -- in other words, tell jokes.

The air is polluted because so much of it has passed through saxophones. A Northern zoo has descriptions of the animals and a Southern zoo has recipes. The mathematician brought a bomb on the airplane because that decreased the chances of there being another one. There are thousands of them!


It helps to get old so you gain some perspective on life.

I was lucky to come along when open-heart surgery was available and there were blood thinners to reduce the risk of strokes. If I had been born in 1880, I'd be dead now. I did my best to die young like Keats and Scott Fitzgerald and Buddy Holly but common sense kicked in and, praise the Lord, I burned the smokes and poured the whiskey in the sink.

We Keillors are doing OK, thank you. We came down from Canada 137 years ago because a Keillor in Minnesota needed help, her husband had tuberculosis; it was simple loyalty on our part and had nothing to do with escaping oppression or seeking opportunity. And we have made the best of it.

Many of us became schoolteachers, following in the footsteps of Grandma. We produced a CEO or two, a physician, a Ph.D. in psychology, an architect, a lawyer, engineers, an astrophysicist, some computer whizzes, and me, an excellent speller with very good handwriting.

I married well. It took several tries but I made it. She is sharp and on top of things. She can be blunt. She is lively and witty, a runner, a musician, she looks terrific. And she is in love with me and has forgiven my excesses.

This is my message for today: If you find a good partner, you are pretty much set for life. And now here you are, looking at each other across the table. Be happy. The Rockies may crumble, Gibraltar may tumble, but thank G0D we're living, cling to your sweetie, draw up a treaty, and happy Thanksgiving Day.