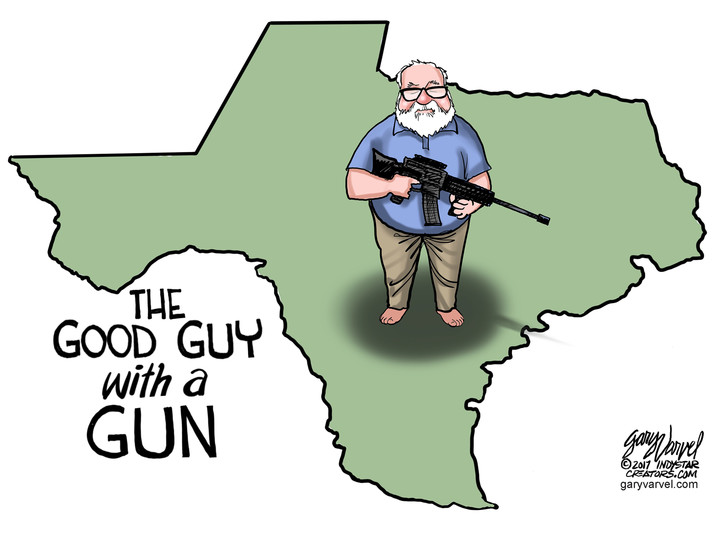 What made former National Rifle Association instructor -- a good man with a gun -- rush forward, barefoot, to confront a killer?

What made him do what had to be done in ?

The political left is clearly bothered by Willeford, bothered that he's anywhere near this story, bothered by his connection, and clearly incensed that President , whom it loathes, said Willeford probably saved lives.

Yet all that is politics, the politics of guns and gun control and Trump and the anti-Trumpers fighting it out, day after day, in the media world.

The political left is clearly bothered by Willeford, bothered that he's anywhere near this story, bothered by his connection, and clearly incensed that President , whom it loathes, said Willeford probably saved lives.

Yet all that is politics, the politics of guns and gun control and Trump and the anti-Trumpers fighting it out, day after day, in the media world.

Willeford, 55, wasn't in that abstract world. He was in , in the street without his shoes.

And he was hearing the sounds of a wolf among the sheep in the .

As you know by now, the wolf was , a madman or evil or both, slaughtering 26 people in that church and critically wounding two dozen more.

You look at Kelley's photograph, you see those eyes, and you might think you're staring at the face of evil.

Willeford was armed. He checked his weapon. He moved toward the church.

"I'm not a hero. I am not," Willeford insisted. "I think my God, my Lord protected me and gave me the skills to do what needed to be done, and I just wish I could have gotten there faster, but I didn't know. I didn't know what was happening."

So what drove Willeford to do what had to be done?

That's just one of the many questions still unanswered about Kelley's rampage.

Should murderous madmen like be able to get their hands on guns? Of course not.

We know that the political left wants "sensible gun control" although what that means exactly, it's not sure. What it wants doesn't sound like policy, exactly, as much as it sounds like the politics of yearning.

Meanwhile, the right wants the left to leave the guns alone, leave the alone, to leave Trump alone as long as he's useful.

And it wants more attention paid to the dangerously mentally ill, although what that means exactly, it's not quite sure either.

What we do know is that the clearly failed the victims in by not listing Kelley's violent past in a federal database after he was kicked out of the service.

He'd battered his wife. He'd broken the skull of his toddler stepson. He'd reportedly pointed a gun at his officers and had been put into a mental institution and escaped from it for a time.

If the had put all that down as required in the database, the FBI would have seen it and Kelley wouldn't have been able to purchase his guns.

But it wasn't done. The , which is a large government bureaucracy, failed the people in that church, the dead and the living, and Kelley purchased his guns, legally.

And then at church on Sunday, with people praying, Kelley walked in, dressed in black, and began shooting.

Willeford's daughter heard the shots coming from the church. She called out to her father, a local plumber. He rushed for his gun safe and grabbed a rifle, his AR-15, and made for the church.

He'd forgotten to put on his shoes. He was barefoot.

He confronted Kelley, who was dressed in combat gear, including a ballistics vest, and began firing. It's a good thing Willeford had his rifle.

Kelley, 26, was hit twice, dropped his long gun, began firing a pistol and made it to his vehicle.

Willeford flagged down a truck driven by , 27 -- they didn't know each other, Johnnie was visiting a girlfriend in town when he heard the shooting -- and they gave chase.

They raced at speeds reaching 95 mph on those Texas roads. Finally, the chase ended, and Willeford trained his gun on Kelley's SUV, and waited.

Kelley had shot himself and was dead.

Langendorff, with his cowboy hat and pearl snap shirts and bull tattoo, explained it this way: "I just did what I had to do," he told reporters. "I just did what most people around here would do."

Before Willeford ran out into the street with his rifle and his bare feet, and before Langendorff picked him up so they could chase Kelley down, there are a few things they did not do.

There was no politics to what they did.

Instead, what they did was an apolitical American virtue, something we once took for granted in this country.

They did what was necessary to help their neighbors. They knew what had to be done. They didn't ask for an invitation or for permission.

They simply did it, because there was no one else to do it. The task fell to them. And they responded.