State Department making a laughingstock of the US and President Trump 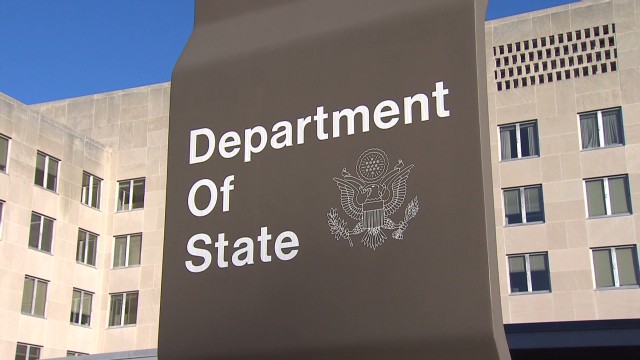 Over the weekend, The New York Times published its latest broadside against US Secretary of State Rex Tillerson for what the newspaper referred to as his “culling” of senior State Department officials and his failure to date to either nominate or appoint senior personnel to open positions.

But if the State Department’s extraordinary about face on the PLO’s mission in Washington is an indication of what passes for US diplomacy these days, then perhaps Tillerson should just shut down operations at Foggy Bottom. The US would be better off without representation by its diplomats.

Last week, in accordance with US law, Tillerson notified the PLO’s Washington envoy Husam Zomlot that the PLO’s mission in Washington has to close within 90 days because it has breached the legal terms governing its operations.

Specifically, Tillerson explained, PLO chief and Palestinian Authority President Mahmoud Abbas breached US law when he called for the International Criminal Court to indict and prosecute Israeli nationals during his speech before the UN General Assembly in September.

Tillerson explained that under US law, the only way to keep the PLO mission in Washington open is if US President Donald Trump certifies in the next 90 days that its representatives are engaged in “direct and meaningful negotiations” with Israel.

The PLO didn’t respond to Tillerson with quiet diplomacy. It didn’t make an attempt to appease Congress or the State Department by for instance agreeing to end its campaign to get Israelis charged with war crimes at the ICC. It didn’t put an abrupt end to its financial support for terrorism and terrorists. It didn’t stop inciting Palestinians to hate Israel and seek its destruction. It didn’t disavow its efforts to form a unity government with Hamas and its terrorist regime in Gaza.

It didn’t join Saudi Arabia and Egypt in their efforts to fight Iranian power and influence in the region. It didn’t end its efforts to have Israeli companies blacklisted by the UN Human Rights Committee or scale back its leadership of the international boycott movement against Israel.

Instead of doing any of these things, in response to Tillerson’s notification, the PLO lashed out as the US. Abbas and his advisers launched an all-out assault against President Donald Trump and his team of Middle East envoys led by his son-in-law and senior adviser Jared Kushner and his senior negotiator Jason Greenblatt.

PLO-controlled media outlets published a flood of stories which trafficked in antisemitic conspiracy theories against Trump and his Jewish American advisors. The PLO media renewed its allegations that Kushner, Greenblatt and US Ambassador David Friedman are more loyal to Israel than to the US.

Abbas’s media outlets also escalated their criticism of Saudi Arabia, Egypt and the UAE for their focus on combating Iranian aggression. These regimes are selling the Palestinians down the river, the PLO outlets have proclaimed, as Abbas’s flacks have insisted that the PLO will not accept any regional peace.

Relations between Arab states and Israel, the PLO insists, cannot be fostered so long as Israel fails to capitulate to all of the PLO’s demands.

In commentary published at the Gatestone Institute website, Palestinian commentator Bassam Tawil alleges that the Palestinian rejection of the requirements of US law and its assaults against the Trump administration and Sunni Arab states may serve as a pretext for another Palestinian terror campaign against Israel, which will be justified as a response to an American-Israeli-Saudi-Egyptian plot against the Palestinians.

Given that the US is a superpower and the largest state financier of the PA, not to mention the foundation of the PLO’s claim to legitimacy on the world stage, the US might have been expected to respond harshly to the PLO’s threats and slanders. But then, that isn’t the State Department’s way of doing things with the PLO.

Rather than shrugging their shoulders and acknowledging that Abbas and his comrades have absolutely no intention whatsoever of abiding by the terms of their mission’s operations in Washington and shutting it down, the State Department began to stutter.

Obviously we wish to continue our good relations and our position as mediator between the Israelis and the PLO.

Obviously we wouldn’t wish the PLO any harm and really, really don’t want to close down its mission in Washington.

It’s just that we have this stupid law and we have to follow it, State Department officials insisted.

And then, less than a week after Tillerson sent his letter to Zomlot, the State Department beat a hasty retreat from its earlier decision to actually abide by US law when it comes to the PLO.

Saturday, The Hill online newspaper reported that the State Department had changed its mind. It is no longer interested in following the law. Instead, it has rewritten the law. Now, it’s fine for the PLO to operate in Washington while trampling US law. It just needs to pretend it isn’t doing what it is doing.

According to the State Department spokesman who revealed State’s about face to the media, the PLO mission can continue to operate, but its operations must be “related to achieving a lasting, comprehensive peace between the Israelis and Palestinians.”

And if they aren’t, well, under this new interpretation of the law, the State Department can pretend it hasn’t noticed.

Two questions arise from the State Departments reversal. First, how does this decision advance the cause of peace between Israel and the Palestinians? And second, how does this decision impact the Trump administration’s bid to realign the balance of forces in the Middle East away from Iran and toward the US’s Arab allies, led by Saudi Arabia? The answer to the first question is straightforward. By empowering the PLO to continue to breach US law – with the full expectation of continuing to receive US assistance to the tune of more than $500 million a year – the US has made itself a laughingstock. Neither Hamas nor the PLO will take the US seriously. Any pressure the US attempts to apply toward the PLO to moderate its stand toward Israel will be ignored by Abbas and his cronies in the PLO and Hamas alike.

And the PLO can finance terrorism, sign a unity deal with Hamas and side with Hezbollah in Lebanon against Saudi Arabia.

The Trump administration will do nothing against them. Instead, in the face of this contemptuous slap in the face to the US, Vice President Mike Pence will travel to Ramallah next month and have his picture taken with Abbas the “moderate” leader and peace partner.

This then brings us to the second question of how surrendering to PLO threats will influence the US’s regional position. As Tawil reported, Al Quds, a Palestinian paper that reflects the views of Abbas and his associates, blasted the Arab League for focusing on Iran at its most recent foreign ministers’ meeting in Cairo.

“The meeting ignored the Palestinian cause,” the paper complained.

“We are facing new Arab alliances against Iran, all under American pressure.

This will have a negative impact on our cause,” it warned.

For more than a generation, the State Department, and through it US Middle East policy as a whole, have been captivated by the myth that nothing can happen in the Middle East without Israel first capitulating to PLO demands.

Today, 17 years after the PLO rejected statehood and peace at Camp David and in so doing, made clear that no Israeli capitulation short of national suicide will satisfy it, and with the Sunni Arab world now eagerly working with Israel to defeat Iran and its proxies, it is clear that it is time for the US to cut the cord on the PLO.

By reversing course on closing the PLO mission, and groveling to the threatening PLO, the State Department made a laughingstock of the US and President Trump. The decision to reverse course should itself be reversed, in accordance with US law and in the interest in restoring what it is still possible to restore of US credibility in the Middle East.