Sexual Harassment? Depends on the Victim 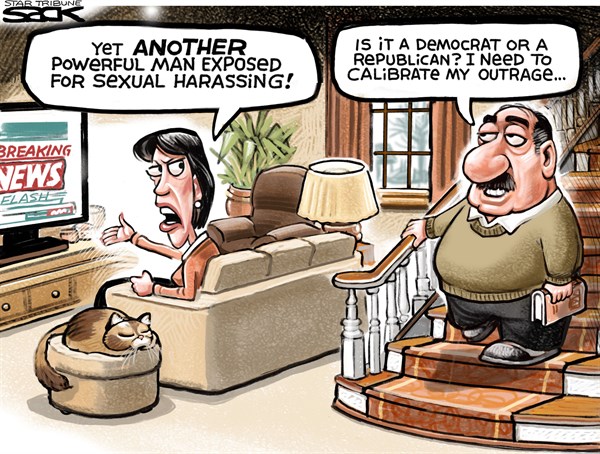 It seems as if every day, another celebrity is being charged with sexual harassment ranging from several decades past to just a few months ago.

Although I am a 'Me Too' since childhood, I'm not that quick to lump myself in with those women making these charges and it would be prudent to examine carefully the circumstances of these incidents.

I've never been a fan of Al Franken but I've noticed that those photos showing his groping of women also show those women smiling as if they're in on the joke.

Arianna Huffington and Joy Behar didn't seem to be traumatized by the comedian's wandering hands and sly grin caught on camera. Franken may be despicable but he's not the same type of sexual harasser as the predatory Harvey Weinstein.

That being said, those who want him gone should be checking out his behavior as a senator which is not very flattering at all.

As for those allegations against Judge Moore from forty years ago --- to have come just weeks before an election? Give me a break.

It's become obvious that his accusers have more than stretched the truth and may have even falsified evidence of his alleged misbehavior.

Feminist lawyer and suspected con artist Gloria Allred may have bitten off more than she can chew since much of her evidence of harassment has been debunked.

Forty years ago in the Deep South, it was not unusual for older men to date young women and most did with their parents' approval.

Duck Dynasty patriarch Phil Robertson who has been married for over fifty years started dating his wife when she was just 14. How can we forget Elvis Presley's pursuit of the teenage Priscilla when she was just 14? Rock legend Jerry Lee Lewis married his 13 year old cousin, Myra Gale Brown, and while there was a brief boycott of his records, he still became a huge star.

Most of the voters in Alabama will recognize this scandal as a colossal hit job by the Democrats and I predict Judge Moore will probably win. Whether he should stay in office or resign is another question because the GOP elites want him gone as he represents the far right that is opposed to gay rights and abortion.

Unfortunately for McConnell and Ryan, leaders of the GOP Congress, Alabama voters agree with his positions.

There are several types of sexual harassments and I believe it's time to take a hard realistic look at what they are.

Just about every woman, especially, attractive women, has been subjected to the, "Hey, good looking, hey mama" otherwise known as the construction worker cat calls. Some women may found this harassment on their way to work but frankly, some find it flattering. I know that I did when I was a young woman with a fine figure.

Then there's the horrible kind that children and the young are frequently victims of and that is the flashing of penises and male self abuse.

As a child living in Spanish Harlem it was common for young girls like me to turn and look after someone said, "Psst" only to see the offensive action that was sometimes even committed by young boys. I am so grateful that I had a father who loved and treated me with respect or I would have been permanently turned off by all men.

Some women who have been abused as children have needed therapy to repair the damage done to their future relationships with men. There are also many who do not recover and end up suicidal.

It's time for all men to recognize how degrading it is to expose themselves and punishment for such actions should be severe if children have been targeted.

The worst kind of sexual harassment comes from those who use their positions of power to force women to bend to their sexual requests. Most of the women who are bringing those charges against celebrities and politicians are alleging such treatment occurred.

These charges have destroyed careers and reputations and that is why due diligence needs to be applied to all investigations. It is very easy to make charges against a celebrity if one has a high powered attorney orchestrating the publicity. It is also reasonable to question why someone would wait several decades to come forth.

One of the questions we should be asking is â€˜Why now?' NBC just canned Matt Lauer after 20 years for 'â€˜inappropriate sexual behavior' and CBS canned Charlie Rose for the same reason. It took the takedown of the powerful Hollywood producer Harvey Weinstein to start the dominoes falling. This was initiated by Rowan Farrow's devastating article in the New Yorker which described in detail Weinstein's disgusting sexual attacks on many actresses he held power over. In some cases, he may have raped them yet he was never charged until now with this crime and now the NYPD is seeking to reopen an assault case that should have been activated years ago.

Women my age have been dealing with some type of sexual assault ranging from the minimal to the severe for many decades. In most cases we've learned to handle these offenses without the aid of an attorney or partisan media lapdogs looking for a story. The casting couch in Hollywood has been an open secret tolerated by many depending on the value of the offender to the studio executives. Morality has never been their guiding principle but the money always is front and center.

I was physically assaulted as a young woman but I take responsibility for my naivete about men and being where I should never have been in the first place. I am not blaming the victims but at what point are the women asking themselves about their own responsibility in enabling such demeaning treatment in exchange for jobs or gifts.

It takes a good deal of bravery for women to defend themselves against the evil that powerful men wrought. I commend actress Rose McGowan for reporting details of the rape by Harvey Weinstein which she reported to others like actor Ben Affleck who refused to take her seriously.

Victims, she said, are blamed and blacklisted. Attorneys warned her that she'd lose any criminal case if she went forward. A NYT reporter tried to publish her allegations but she said she would wait until the public was ready to believe the victims.

That time is now. The lamestream media are saying they now believe those who were assaulted by the president of the United States --- Bill Clinton. Well, whoop de doo! What are the chances he'll ever be punished? We should be extremely grateful to the Almighty that thanks to Trump's miraculous election, Clinton will never be back in the Rose Room he defiled years ago.

Can I get an Amen to that?