Fighting back against the administrative state 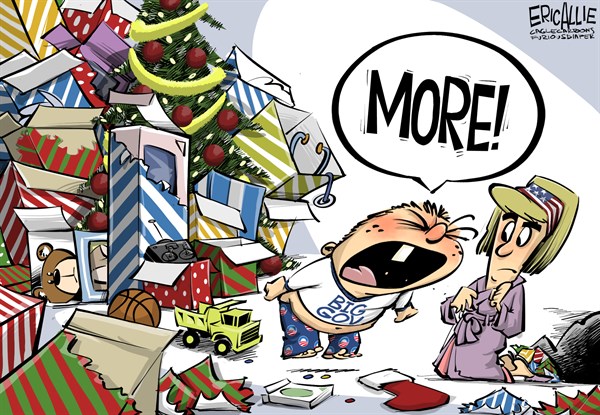 Here is a mishmash of countless federal agencies dictating how we live with little if any reference to rights and constitutional safeguards, and that brings us to the Consumer Financial Protection Agency.

It happens to be in the headlines now because the Trump administration is in the process of saving us from its contribution to this leftist, destructive authoritarianism that Democrats persistently embrace.

This super-powerful agency well represents their vision of a New America that has been emerging for quite awhile but was grotesquely amplified under the presidency of Barack Obama. In this instance, there was jubilant assistance from Sen. Elizabeth Warren.

When the Dodd-Frank financial reform law was sadly being created, this Democrat from Massachusetts fought for the legislation to include an agency encompassing her deepest dreams. Avoiding special-interest politics, it would have investigative, regulatory and juridical powers. The purpose sounded good: Bureaucratic magnificoes would prevent fraud by financial services in advertising, contractual language or other sneakiness.

But what the agency actually avoided was accountability to the American people. It dubiously got its funding from the Federal Reserve, meaning Congress had a smaller handle on waywardness. Oversight? Ha! Time and again, even with the virtual imprisonment of a free enterprise activity, the agency did not provide Congress with the information requested.

It was however as political as political gets, signing on Democrats with Republicans not even considered, according to one whistleblower. It paid some $45 million in contracts for advertising and research to an advertising agency that played a central role in President Barack Obama's presidential campaigns, the Daily Caller reported. Its employees donated $50,000 to Democratic candidates.

Confusion has been an agency specialty, as an alert analysis shows. For example, to prevent poor people from buying houses they cannot afford, the agency devised complications preventing people from buying houses they can afford. Similarly, to crack down on what it considered unfair payday loan policies, it made it impossible for vast numbers to get loans they badly needed.

It did not say, however, that the person should grab the reins when the spot was vacated. Since vacating is what happened, President Donald Trump clearly had the replacement prerogative and chose Mick Mulvaney, director of the White House Office of Management and Budget, as acting director. The deputy director, still dwelling in the agency's state of confusion, filed a lawsuit against the move and a judge, in so many words, said, "Are you kidding?!"

Mulvaney's mission is to inhibit new malfunctions, one small but vital step against an administrative state described by a law professor quoted online as "the power to make binding rules without law, outside the law, or against the law, exercised by someone other than an elected legislature."

We live in a swamp of often illicit regulations, and there are so many no one can know what they all are, enforce them or even count them. Some contradict each other, they affect things big and tiny and are executed by scores of federal agencies. I just recently read that no one knows the number of federal agencies, either. They just keep growing â€“ it was noted that Obamacare alone gave rise to 159 new units of one kind of another.

Federal roles constitutionally reserved for the legislative and judicial branches of government have been usurped, but Congress, which has helped facilitate a lot of this, is beginning to fight back, as is the Trump administration through regulation rollbacks and other means.

Do your job Mulvaney, and hallelujah.