How voters who heavily supported Obama switched over to Trump 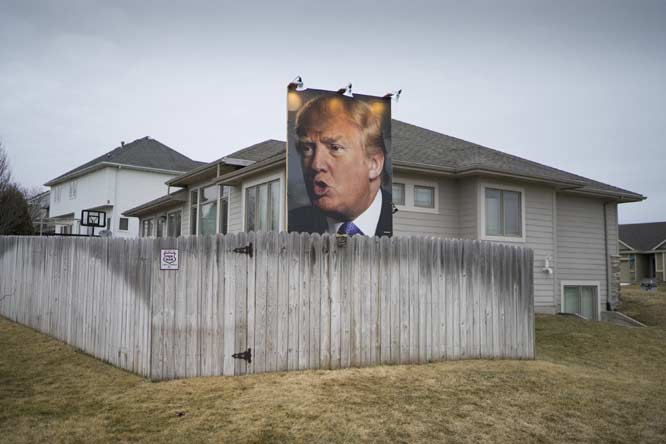 KENOSHA, Wis. - The day after the election, Bob Oldani parked himself at the Common Grounds coffee shop and talked to whoever came by. At 71, he had just cast his first Republican vote for president. "Don't tell my wife," he joked, as he told anyone within earshot why he'd backed Donald Trump.

"We need a change in everything, and I hope he can do it," said Oldani, who'd retired after years as a machinist. "This guy's a billionaire, so I'm thinking he can say, 'Hey, let's just get the job done. I don't need your money.' "

The rebuttals started flying. What about the leaked tax forms that showed Trump's writing off nearly a billion dollars?

"As far as these rumors with the girls, and all of that - if you do your job, who cares?"

A few miles away, outside a Culver's near Kenosha's sprawling and anonymous business park, Joe Schmaling and Oscar Corona were taking a break from their landscaping business. Schmaling, 32, said that work had been steady - "maybe because Obama's on the way out" - and that Trump, in the words of his campaign, would "drain the swamp" of Washington.

"If we put up with Obama, we can put up with four years of this guy," said Schmaling. "I'm excited to see him blow the place up. He stands on his own, so he can throw the middle finger up."

Corona, 30, was born in Mexico but lives in the United States with a green card. They'd just been joking about whether Trump would kick him out of the country, fully confident that he wouldn't.

In interviews on Wednesday, again and again, voters in Kenosha said that they had gotten behind Donald Trump. Often, they had not cast a vote for a Republican presidential nominee before. More often, they said that the past eight years had gone well for them - although, tellingly, the city had been better in the times they dimly remembered.

Trump, the first Republican to win the Rust Belt states of Pennsylvania, Michigan and Wisconsin since the 1980s, did so by narrow margins. Rural voters broke decisively his way. Trump's last-minute campaign swing through Eau Claire, a western Wisconsin city that shares a largely rural media market with parts of Minnesota, confounded Democrats who saw him losing in polls. It made more sense when massive Trump margins in rural Wisconsin gave him the state.

Kenosha, south of Milwaukee and north of the Chicago suburbs where Hillary Clinton was raised, was telling of the threat that sneaked up on Democrats. The industrial economy had been replaced by tourism, but the county was growing. No one would have picked it for a travelogue of trade-racked America.

And it had voted for Democrats. It voted for Barack Obama, twice. It voted against George W. Bush, twice, and for Bill Clinton, twice. It helped Michael Dukakis carry the state in 1988 and, four years earlier, gave Walter Mondale a five-percentage-point victory over Ronald Reagan. No Democrat had lost since 1972.

Hillary Clinton lost it; in retrospect, the trend was obvious. In her 2008 loss to Barack Obama, Clinton lost Kenosha County by just three points, as she lost by 18 points statewide. In the 2016 Democratic primaries, Clinton lost the county to Sen. Bernie Sanders by 15 points - despite a closer result across the state. She carried heavily black Milwaukee County, and Sanders carried everything else.

"White working-class people are deserting the Democratic Party in droves," Sanders said in an interview Thursday.

The 2016 election was Wisconsin's first since the Supreme Court's ruling in Shelby County v. Holder, which undid part of the Voting Rights Act; the first since Gov. Scott Walker, R, signed voter ID legislation; the first since Walker pushed through right-to-work legislation. Each domino, Democrats warned, was falling on their party by design. An estimated 300,000 people lacked voter IDs on Election Day, and private-sector unions had shrunk and consolidated since 2015.

"We had to go to our membership and ask specifically, 'Are you able to donate ten cents per hour?' " said Randy Bryce, a local organizer and one-time Democratic candidate for state Senate, describing how a series of laws had weakened the labor movement. "With the economy now, that's impossible to do. So any money we had [at] the start of the process was all we'd have for the rest of our existence."

Yet on Wednesday, sitting around a table in their downtown Kenosha headquarters, local leaders of the Democratic Party said the voter-ID issue had not stuck. Approaching the election, it seemed that they were mobilizing the party's loyal voters.

"It was just that 'Make America Great Again' turned out to be genius," said Karen Kempinen, 67, a retired teacher. "That resonated. They didn't need to think any further than those words."

In 2012, 21 percent of Wisconsin voters told exit pollsters that they or a family member belonged to a union. They broke for Barack Obama by 33 percentage points.

This year, just as many voters said they were in union households - and Clinton won them by just 10 points. The numbers and the swoon were similar in Michigan, Ohio and Pennsylvania.

Early on, Clinton's campaign had waved off the idea of a backlash. After her victory in Ohio's primary, campaign pollster Joel Benenson, an Obama veteran, wrote confidently that white working-class voters had paid attention to her real trade record. "Democrats in states hit hard by the loss of manufacturing jobs are looking for more than anger and accusations, and stopping abuse by foreign countries," he wrote. "They're looking for real plans and a broad economic agenda."

But to the bafflement of Democrats here, the late Clinton push into the state - a series of ads that began in late October - did not mirror the economic messaging of the local labor unions. One played back Trump's worst remarks about women; another, his mocking of a reporter with a physical disability; the last, a warning from a nuclear technician who worried that a reckless President Trump would start a war.

In 2012, when Democrats fought for Wisconsin all cycle, there had been clear economic messaging. One Obama ad dramatized Mitt Romney's plan to "give millionaires another tax break" with a photo of him walking past Donald Trump's plane.

Romney lost Kenosha despite tapping Paul Ryan, who represented the district in Congress, as his running mate. But in midterm years, and in the historic 2012 recall that took place before the general election, Kenosha voted for Walker, the governor.

Walker's popularity had slipped since then, but his style had stuck with people. After work on Wednesday, a retiree named Larry Ancona, 61, bitterly pointed out the rows of homes that stood where there used to be an American Motors plant powering the city's economy.

"I know people that get $800 a month in food stamps, lied to get that, lied to get the medical benefits. And here we are - we're paying for it," he said.

"He got a war in Iraq without a price tag," Tenuta said. "I voted for Bush twice, but Obama inherited a mess from that guy."

But Tenuta was more optimistic about Trump. For one, he had broken the old, bad Republican Party - "He was on his own from day one." For another, he seemed ready to break legislative stalemates where Obama never could.

In Wisconsin, with a Republican majority that need not worry about a filibuster, this thinking was self-evident. Washington stumbled and failed and offered nothing; Trump offered brisk if unspecified change. It still made little sense to Democrats.

"I was going to be one of the electors this year for Hillary," Bryce said. "I thought it was a done deal. I could not imagine anyone voting for the man, based on the things that were coming out of his mouth."