While some of Trump's ideas can be quickly implemented, others face political and legal hurdles 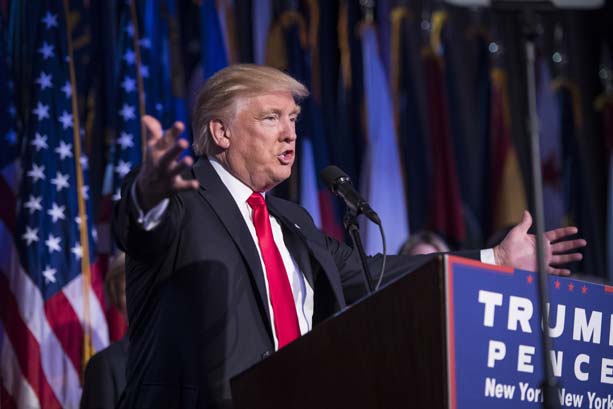 NEW YORK - President-elect Donald Trump is set to take office under immense pressure to quickly deliver on a list of audacious campaign promises that served as the cornerstone of his bid to disrupt Washington and undo pieces of President Barack Obama's agenda.

Some of Trump's most dramatic undertakings - such as canceling Obama's "illegal" executive actions - can be done in his first hours as president. Other priorities, such as repealing and replacing the Affordable Care Act or building a wall on the U.S.-Mexico border, will require the approval of Congress, which will be controlled by Republicans but could still squabble over details. Others still could run into political or legal obstacles that may be difficult to overcome.

For Trump, the transition from proposing severe changes on the campaign trail to trying to navigate the complex gears of government to implement them will serve as a jarring early test of his tenure in the White House.

Two of Trump's ideas could probably be realized as early as his first day in office: scrapping executive orders issued by Obama - including those that shielded from deportation some immigrants who are here illegally - and appointing a special prosecutor to investigate vanquished Democratic opponent Hillary Clinton.

The former is a common tactic for new presidents whose predecessors belong to the opposing political party. Obama signed an executive order ending a ban on federal funding for embryonic stem cell research imposed by George W. Bush early in his first term.

The latter would be a political risk. By going after the opponent he just defeated, Trump could imperil his chances of broadening his appeal to the millions of Americans who did not vote for him.

"He certainly could do it, but it could have a major, devastating impact on her and would create a very bad precedent like we see in Third World countries" where election winners often imprison their rivals, said John Banzhaf III, professor of public interest law at George Washington University and a scholar on administration law.

Repealing the ACA would take an act of Congress, as would levying some types of tariffs on corporations that move operations overseas, ending regulations that limit pollution and coal production, getting rid of gun-free school zones, and renegotiating the Iran nuclear deal. He would have the authority to renegotiate trade deals such as the North American Free Trade Agreement that he has long railed against - and to withdraw with six months' notice if he wished - but such a move could be catastrophic for stock markets and the economy.

For years, Republicans on Capitol Hill have tried to shred Obama's signature health-care law, only to be stopped by the president. But after holding their majorities, they are finally in position to make it happen in conjunction with the new Republican president.

While Trump spent countless hours on the campaign trail assailing the law, he has yet to fully articulate what he would offer as an alternative. Trump said that he would encourage health savings accounts, allow insurers to sell policies across state lines and convert Medicaid from an entitlement program to a block grant to states - ideas long favored by GOP conservatives. As for the rest of Trump's plan, he has assured supporters that it will be something "terrific" that is "so much better, so much better, so much better."

Building a wall on southern border would require Congress to commit hundreds of millions of dollars to make it happen. Trump also has no power to force Mexico to pay for it, as he has repeatedly promised to do, although he could pressure the Mexican government with threats to limit trade or drug-related law enforcement activities.

History shows it can be hard to fulfill vows that sounded easier to make in front of cheering crowds on the campaign trail. For example, Obama immediately issued an executive order closing the military prison for suspected terrorists at Guantanamo Bay in Cuba, but members of both parties in Congress voted to block its closure. In the final months of Obama's presidency, the prison remains open.

Heavily surveilling mosques in America in the way Trump has advocated would require courts to reinterpret constitutional protections and rights. And if he wants to follow through with his proposed ban on most Muslims from entering the country - which he stopped talking about in the final months of the campaign even as it remained on his campaign website - would immediately be challenged in court as either unconstitutional or against current law, legal experts said.

But Trump would probably have the ability to ban a narrower group of Muslims living in certain parts of some countries controlled by Islamic State terrorists because the immigration statutes afford some discretion on national security grounds.

Another category of Trump's promises amounts to changing the priorities of agencies. That would require getting Congress to allocate more money for programs already underway, such as deporting illegal immigrants with criminal records and broader promises to "fix the Veterans Administration" and "start taking care of our military."

In the area of national security, where presidents traditionally have more leeway, Trump could order his top military chiefs to come up with a plan within 30 days to stop the Islamic State, as he has promised. But if the plan would require the deployment of troops to Iraq and possibly an invasion of Syria, a war-weary Congress eventually would need to sign off and agree to fund a large and open-ended increase in military spending.

Even if the plan were to rely on the CIA's covert action authority and be carried out in secret, Trump would face limits on what he could do and what the professionals at the CIA, the National Security Agency and other intelligence agencies might be willing to do.

For example, if he tried to order the use of torture against terrorists, as he has pledged, Trump would immediately run into legal impediments and a buzz-saw of resistance from CIA lawyers and operators still smarting from a decade of revelations and public criticism over waterboarding and secret prisons, intelligence officials said.

Trump would have to persuade Congress to overturn the ban on waterboarding instituted by George W. Bush in 2006 and the congressional ban on any interrogations that go beyond the restrictive ones outlined in the Army Field Manual.

He could ask the intelligence community and White House lawyers to come up with a new set of harsh interrogation methods that they believe do not violate U.S. law and do not amount to torture, which is prohibited under U.S. and international law, said John Rizzo, longtime acting general counsel at the CIA.

But, Rizzo and a half-dozen former intelligence officers warned, "There would be such pushback" from many at the CIA, given the damage that revelations over extreme measures did to the agency's reputation.

At his final campaign rally in Grand Rapids, Michigan, on Monday, Trump said he would put in place "the largest tax cut since Ronald Reagan" and offered less specific ideas such as eliminating "every unnecessary, job-killing regulation," protecting religious liberty and rebuilding the military and law enforcement.

"Just think about what we can accomplish in the first 100 days of a Trump administration," he told the crowd.