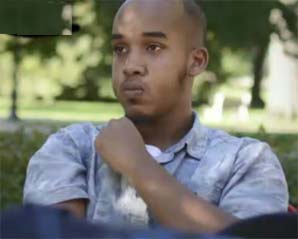 The thwarted mass murder at Ohio State University: To the Best Vice-President We Never Had, Tim Kaine, it was "a senseless act of gun violence". To those under attack, it was in fact an act of automobile violence and machete violence. And to the perpetrator, it was not "senseless" but made perfect sense.

Three months ago, Abdul Razak Ali Artan gave an interview to the university newspaper (you can find it here on page five) complaining about inadequate signage for Muslim prayer rooms:

I wanted to pray in the open, but I was scared with everything going on in the media. I'm a Muslim, it's not what the media portrays me to be. If people look at me, a Muslim praying, I don't know what they're going to think, what's going to happen. But, I don't blame them. It's the media that put that picture in their heads so they're just going to have it and it, it's going to make them feel uncomfortable.

Yes, it's very unfortunate that people feel uncomfortable when they see a Muslim praying ...because of all these unfair media stereotypes about violent, dangerous Muslims. So, three months after being lovingly profiled in the college newspaper as the antidote to all those misleading stereotypes, young Abdul went full Allahu Akbar on his fellow students.

And now a zillion federal, state, county, municipal and university law-enforcement agencies are rolling in the overtime to determine what Mr Artan's mysterious "motive" might have been. I note this from The New York Times:

Investigators were looking into whether the attack was an act of terrorism and were seeking information on the student, Abdul Artan, a permanent United States resident from Somalia who was studying logistics management at Ohio State.

"Logistics management": Is that what they're calling it now? Well, it makes more sense than the Obama Administration's "workplace violence".

~Of course, we don't really need to worry about terrorism because we're spending more than ever on our ever more sophisticated intelligence services. Whoops, what's this?

The US media are still trying to explain to their shell-shocked readers what happened on November 8th. Nobody likes to be told they're out of touch and living in a bi-coastal bubble. So The Washington Post's Jeff Guo has decided that "rural Americans live in a bubble, too":

A few weeks ago, I interviewed Kathy Cramer, a political scientist who has spent many years listening to the people of rural Wisconsin. Rural folks, she told me, often believe they are in a losing battle with cities and elites. In their understanding of politics, she said, it's the hardworking country sons versus the lazy urbanites; the struggling small towns versus the self-indulgent metropolises; the honest farmers versus the government pencil-pushers. It was these perspectives, Cramer told me, that helped explain Donald Trump's success.

Speaking for my own patch of North Country decrepitude, I think Ms Cramer and Mr Guo are all wet. It's not "hardworking country sons versus the lazy urbanites": Trump voters are worried about precisely the opposite - that, even if you want to work hard, there's nothing to do. The grandsons of farmers and sons of mill workers have kids whose only local career choices are a minimum wage shift at the KwikkiKrap - or a little light heroin-dealing. The latter is more lucrative, and rather more interesting.

Well, so what? James Livingston says "F**k work". He's a Rutgers professor so he's fully credentialed to talk like that. Prof Livingston rejoices in the impending end of employment:

That is why it's also an intellectual opportunity: it forces us to imagine a world in which the job no longer builds our character, determines our incomes or dominates our daily lives.

In short, it lets us say: enough already. F**k work.

Certainly this crisis makes us ask: what comes after work..? The impending end of work raises the most fundamental questions about what it means to be human. To begin with, what purposes could we choose if the job - economic necessity - didn't consume most of our waking hours and creative energies? What evident yet unknown possibilities would then appear? How would human nature itself change as the ancient, aristocratic privilege of leisure becomes the birthright of human beings as such?


These are fascinating questions, if you're a tenured professor. If you're living in a deadsville burg where you can't sell up and move on because your home's value is going down and neighborhood drug crime's going up, the answers to the fascinating questions are rather less fascinating, and already here. Denyse O'Leary identifies the post-work world's thriving industries:

Today's global government does not need many human beings, and certainly not free ones. That limits the options of those who support globalism but would prefer not to be the human equivalent of shelter animals: useless and only just slightly protected by law.

That's a big point: A world after work will be no friend of liberty.