Democrats are now basically extinct in the South 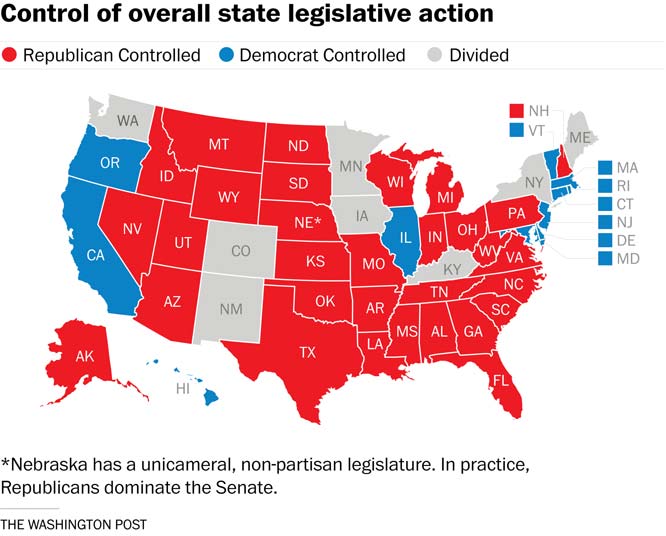 As of Tuesday night, consider the political realignment of the South from blue to red complete.

Kentucky Democrats just lost control of the statehouse they had held onto for nearly a century -- and with it, the party's last Southern legislative chamber.

The development was a year in the making. Democrats' control of the chamber had been hanging on by a thread as Republicans swept most other statewide offices in 2015 elections.

The GOP wave was led by Gov. Matt Bevin, a businessman whose outside appeal and flare have been likened to Donald Trump, and came from behind to become only the second Republican to lead the state in four decades. (Speaking of Trump, the GOP nominee won Kentucky Tuesday with more than 60 percent of the vote.)

Suddenly four seats in the chamber were open. And four just happened to be the magic number Republicans needed to take control of it (Democrats held control at 50-46). But Democrats held off Republicans in a special election in March for those four vacancies, winning three of the four. They even added a seat to their majority.

And then they lost it in an election eight months later. In one of the biggest blows of the night for Kentucky Democrats, their House speaker, Greg Stumbo, lost to his Republican challenger, Larry Brown. But Republicans bested Democrats in Eastern Kentucky state House races as well.

Now, Kentucky Republicans control the executive and legislative branches of government in the state. Which means they have a clear path to pass a range of conservative bills that had been stopped by the Democratic statehouse -- like restrictions on abortions, limits on transgender use of bathrooms, limited power of unions.

As recently as 2010, Democrats held a 65-to-35 advantage in the statehouse. But even though President Bill Clinton won the state twice, Republican Mitt Romney won the state in the 2012 presidential election, and GOP candidates triumphed in the 2014 Senate election and the 2015 governor races -- often by wide margins.

University of Louisville political science professor Jasmine Farrier told The Fix in March that she thinks all this should be a wakeup call for the Democratic Party, which has struggled to bridge the urban-rural divide in heavily rural states like Kentucky. It hasn't really found a way to reach across the cultural divides that separate former Southern Democrats with today's Northern ones.

It also didn't help Democrats that during the Obama years, Republicans absolutely dominated state politics. By the end, they controlled some of their largest majorities of governors' mansions, state legislative chambers (69 of 99) and Congress since the Great Depression. (Though that could change some Tuesday as Democrats are expected to pick up seats.)

But not in Kentucky. It is no longer a Democratic bulwark in a conservative South. It IS the conservative South, a state now better described one of the last to realign with the country's new political reality that Democrats dominate the North -- and Republicans now rule down South.