Obama and Clinton after the election must be held accountable 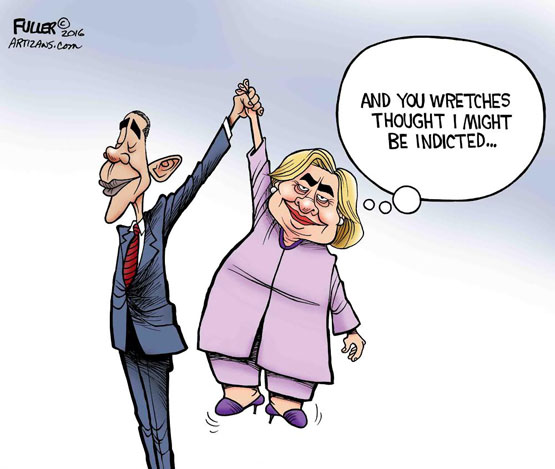 These are tense, worrisome times for Americans. Elections are supposed to be divisive, through the vote-counting anyway.

But this cast of candidate characters with its inappropriate behaviors, remarks and records, coming after eight years of divisive presidential "leadership," has made things even worse.

And while much attention is naturally focused this week on who won and lost, a far more significant result for the nation also needs resolution: What are the consequences, if any, for these recent years chock-full of so much misbehavior, both public and private?

Do those people widely seen as cheating, lying and abusing a sacred public trust pay any public price for their moral malfeasance? Or do they skate free of penalty to enjoy the perceived rewards of power?

We are, of course, talking mostly about the Obama administration and Clinton crowd. Let's look at a few examples:

Solyndra, the solar panel company controlled by an Obama campaign bundler, got a half-billion in guaranteed loans. It went under with $545 million of taxpayer money. Poof. No consequences.

The IRS routinely harassed and stalled conservative groups seeking legitimate tax-exempt status before and during the 2012 election campaign. President Barack Obama professed outrage. The FBI said it could find nothing to prosecute. No consequences.

The Department of Veterans Affairs falsified records to hide outrageous service delays for vets, some of whom died while awaiting treatment. A few officials were shuffled. Congress threw $1 billion more at the agency. No consequences.

At Hillary Clinton's urging, Obama enthusiastically backed allied attacks to topple Libyan dictator Moammar Gadhafi. A mob tore him apart. Clinton celebrated. But no one had planned for the resulting power vacuum. So terrorists now run rampant there. No consequences.

In Libya, Ambassador Chris Stevens pleaded often with Secretary of State Clinton for additional security. Not only was it denied, the existing security detail was pulled. On Sept. 11, 2012, a well-armed mob killed Stevens and three other Americans. No rescue plans were ready. None initiated.

A standard review board of Washington cronies, using documents provided by Clinton's staff and no interview of Clinton, could find no one to blame. Four betrayals. Four deaths. No consequences.

Two State employees, however, were disciplined for cooperating with congressional investigators.

Then came Gen. David Petraeus, the lauded senior commander in Afghanistan and Iraq and CIA director. He shared classified material with his biographer, who had security clearance. He was convicted of mishandling national security info, got a $100,000 fine plus two years' probation.

You may have heard something about Clinton's private unsecured email server these last 20 months. Virtually every claim of innocent intention she made at the scandal's start has proved false.

The FBI was investigating the server - until the latest announcement Sunday that it's not - and possible conflict of interest with the Clinton Foundation, which raked in millions from foreign sources during her State Department tenure, contrary to promises. And Bill Clinton's speaking fees coincidentally soared. So far, no consequences.

Obama claims no knowledge of the unauthorized server. But we now know he exchanged numerous classified emails with Clinton there, using an alias. A McClatchy-Marist Poll finds a majority believe she did something illegal.

Trust within democracy is very fragile. Ours is supposed to be a society of laws applied reasonably, equitably. Hence, the blindfold on Lady Justice with the scales.

Polls find that starting with the 2008 recession, Americans' trust in most of their most important institutions has fallen to historic lows. Gallup found trust in 14 key institutions averages only 32 percent now, down from the mid-40s earlier this century.

Trust in news media, Congress, banks and organized religion tumbled the most. Even trust in the Supreme Court, public schools, police and criminal justice slid. The all-volunteer military stayed steady at the highest trust rating, at 73 percent.

Barely half of his countrymen approve of Obama's job and nearly 2 of 3 say the country is on the wrong track. Dissatisfaction with "the way things are going" stood at 70 percent last month.

All this, sadly, prepares the national soil for enduring suspicions and distrust that continue to corrode the national spirit, even if these elections aren't rigged.