Trump voters finally had enough, and they voted 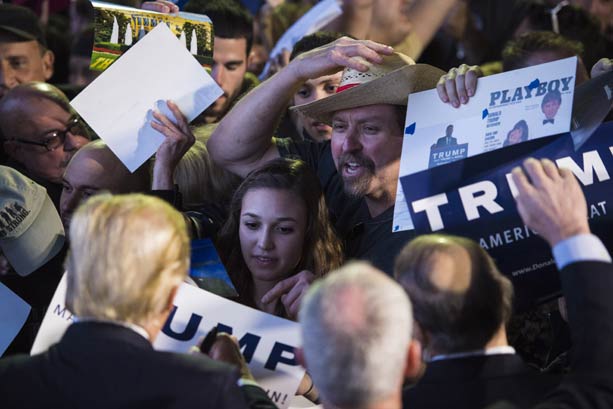 President-elect may turn out to be a terrible president, or a good one.

Or it could all end up as some horrid TV show, like that 1980s soap "Dynasty," but with The Donald and the trophy wife and the beautiful kids and intrigue and money and power.

We just don't know yet.

But until we realize how we got here, until we examine the prejudice and foolish thinking by the elites who led us here, we won't know where we're going, not really.

What we do know is that Trump won state after state, bringing with him Republican control in both the House and the , and he is now poised to put a conservative stamp on the .

But how did it happen, really? How did , with all her money and institutional support, from the Obama White House to a pro- media, let it come to this?

I wrote about it eight months ago, explaining why could not win the presidential election: This is the year of anti-establishment insurgency, and was the dowager empress of that establishment.

So she could not win. And she did not. There is no mystery to it.

And journalists could have seen the anger out there, if they would have just listened to people talk instead of worrying about polling models like some medieval alchemists trying to turn Americans into Hillary's gold.

So what has happened?

has been disgraced by its failure. stacked the deck against and for Hillary. They were found out by WikiLeaks. Now they own this.

And the collusion between the Clinton camp and the media has been laid out in WikiLeaks too.

Journalism hurt itself in this election. In the minds of most Americans, journalists took Hillary's side. And there doesn't seem to be any attempt to self-inspect, or complete a postmortem and cleanse this festering wound.

That's dangerous. Trump must be held to account. But the journalistic pack hunting Trump, without dealing with its own credibility issues for putting the thumb on the scale for Hillary, doesn't restore trust.

"Whether it was a herd mentality, an implicit bias on the way they view these things, they never even considered the possibility of a Trump win," said , co-founder and publisher of Real Clear Politics in an interview on my "The Chicago Way" podcast.

"They would look at the data and say, 'There's no way, it's not going to happen,'" Bevan said. "But it could happen and it did happen."

Clinton, the DNC and the media aren't the only losers.

The most prominent is President . His legacy -- such as it is -- is about to be erased.

It will be erased by a candidate whose voters were held in complete contempt by the liberal journalism elite, those geniuses who fashion themselves the champions of the little guy.

Unless, of course, the little guy decides to think for himself.

Trump voters, left behind in Obama's limp economy, weren't idealized as working-class heroes as they had been in the past.

Under politics of Obama-Clinton, as expressed by the high priests of journalism, these left-behind were mocked as white racists, knuckle-draggers, fools and "deplorables."

One pundit was worried they would be "going with their gene pool," and I just spotted another headline by a liberal pundit on the Tribune's website:

" won. Let the uneducated have their day."

It's no secret that most of American journalism is liberal in its politics. The diversity they prize has nothing to do with diversity of thought.

The leaders in this mean-girl approach to Trump voters are most often white men, as liberally savage in their beliefs as my old lefty college professor insisting that poor mountain villagers yearned for socialism.

"No, they don't," I said, thinking of my cousins back in our family's mountain village. "All villagers want is water for their crops, and to be left alone."

What bothers me, though, is that such tribal thinking, reinforced by threats of shame, has blinded the intelligentsia to the pain of Americans who voted Tuesday.

Even the son of a villager can see that.

It wasn't the uneducated or the knuckle-draggers or the guys drinking beer in the garage working on their own cars that cost the election for Clinton.

She had and lobbyists, and the former Republican Iraq War planner neoconservatives, and the nevertrumpers, the hedge fund guys. She had everything. She had Obama propping her up. And yet she lost.

Why? Because Trump kept saying "Jobs, jobs, jobs," a phrase once used by former Mayor of during a campaign.

It used to irk me, this chanting of "jobs." But it was simple. And that's what people wanted then and now. They don't want a handout. They wanted to work and to be left alone.

Yet they were shamed by elites and a relentless barrage of news stories, columns, all illustrating how deplorable they had become.

They finally had enough. Not just the unemployed or the underemployed, but even, to the surprise of the Democratic elites, those with educations. And women and minorities in numbers unforeseen.