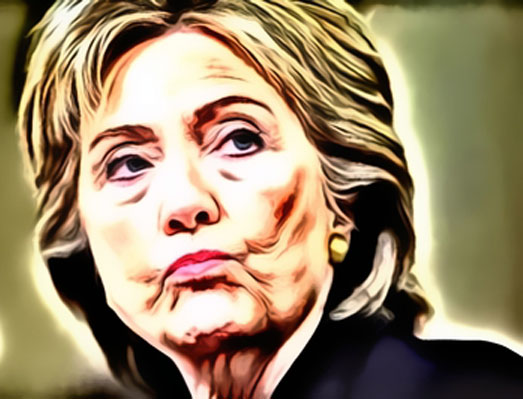 Oooo, Just watched another Hillary Clinton ad against 'Sexist' Donald Trump showing him saying stupid misogynist statements in the past. Terrible man, mean and insulting to women and that makes him unfit for the presidency, right?

If I were a stupid, brain dead woman, then I'd probably be influenced by these ads and support Hillary Clinton, who is probably one of the most corrupt individuals to ever run for the U.S. presidency. I, however, have lived long enough to realize that many men speak as arrogantly as Mr. Trump and we've had several presidents whose private sins would dwarf Trump's if they hadn't been covered up by a compliant media.

The very fact that the Clinton ads are predominantly personal attacks on Trump instead of being issue oriented only proves the campaign's desperation in light of the continuing exposes of the nefarious dealings at Hillary's State Department and the Clinton Foundation. It certainly looks as if she sold the country down the drain to enrich herself and oh yes, four Americans died and an entire country (Libya) was decimated thanks to Hillary. But women are supposed to overlook all that and vote for her because she has a vagina? Did suffragettes battle for the nineteenth amendment for this moronic gender? I think not.

I will reiterate the point I've made in several previous columns. Donald Trump was not our original choice for the GOP nomination but he has certainly earned our support by fighting and working extremely hard against a hostile media and addressing the real issues facing this country and where it's headed. Unlike his opponent, we know that Trump really does love this country and values its greatness and will not apologize for this. The enormous crowds attending his rallies are evidence that his message of 'Make America Great Again' is a very real possibility when not if he becomes president.

If Hillary Clinton was really concerned about women, she would be paying them equal pay but she doesn't. Even her campaign manager, Robby Mook acknowledged paying women less was problematic for his candidate who has continued to make the issue central to her campaign. Yet she has never paid women equal pay when she was a Senator, the Secretary of State and even in her current campaign. She is a total hypocrite.

On the other hand, the so-called 'sexist' candidate, Donald Trump, has more women in executive and managerial positions than any comparable company and he pays these women the same or more than their male counterparts, which proves he looks for capacity and skills in people, not color, gender or race.

Trump fought the West Palm Beach City Council to be able to open his newly purchased club, so he could include blacks and Jews as members, who had been banned until then. He has staffed his hotel with all races and creeds so he's not the racist the media alleges. He is against illegal not legal immigration. He wants to vet those who wish to enter the United States to ensure that they are not Islamic Jihadists who want to harm us. What is so wrong with that? Both Hillary and Obama can't even name our enemy.

Trump wants a Supreme Court that will uphold the Constitution, not behave as minions of the administration. We have had enough with judges who are more like political activists than law enforcers. Abortion is not mentioned in the Constitution yet Hillary wants to have a court that will approve forever abortion on demand even if the fetus is born alive. How I wish they would change the language of abortion rights and call it a woman's choice to kill her baby.

One of the most hilarious clips I've seen is that of Bill Clinton campaigning for his enabler wife and saying "I never felt sorrier for anybody than Melania Trump because she's married to a man who abuses women." Unbelievable. It's been rumored that Bill Clinton has dementia but more likely, it's total amnesia. He's forgotten that he is an alleged serial rapist who was kicked out of Oxford for sexually assaulting 19 year old Eileen Wellstone. He's also forgotten the names of his other victims whom Hillary ridiculed by calling them bimbos and in one case threatened. Read Kathleen Willey's book, Target. Maybe Bill should be pitying Hillary for being married to him.

Smart women aren't fooled by these inane video ads which attack a man who is still a private citizen not an elected official in charge of national secrets and taxpayer funds. It's not surprising that a billionaire playboy would have had many sexual encounters with women who may not have been the best purveyors of sexual prudence.

We may have originally fallen for that devious charge that Trump mocked a disabled reporter by waving his hands spastically until we learned that charge was completely false. The reporter is unable to move his hands at all and Trump routinely makes that gesture to depict anyone being flustered by the truth.

The media also failed to clarify why Trump objected to Judge Curiel presiding over his court case. It was not his Mexican heritage but his connection to a Lawyers group that had petitioned to boycott his businesses and his connection to the plaintiff's attorney. This is a clear conflict of interest that the media spun into a racist allegation.

Perhaps it's too strong to call the Hillary supporters stupid but it's no excuse to call them uninformed in light of the enormous amount of news unveiling her perfidy. I've read the reason some celebrities are voting for this woman. "She's experienced" is heard most frequently and I'm sorry but either these celebs are deliberately lying or they are stupid. Hillary Clinton has certainly spent many years in government but her experience has resulted in total failures and a serious threat to our country's national security. Why on earth would we give this woman the keys to the kingdom?

In an ideal election cycle where the people will have their votes counted, Trump would win in a landslide judging by the thousands attending his rallies. But the billions Hillary has received by foreign despots, Wall Street insiders and the political elite, who live by the status quo, can rig the election through rampant fraud. Election monitors have discovered massive fraud in several states where the dead and illegals are registered and voting. Any attempt to pass Voter ID laws is stymied by the Democrat racists who think blacks and minorities are too stupid to secure government issued id even when it's offered free of charge. What an insult.

The only way Trump can win is with such a 'yuge' turnout that it negates the fraud. Here's hoping that those who are so principled that they stay home are Democrats. The others are just proving that they are stupid too.