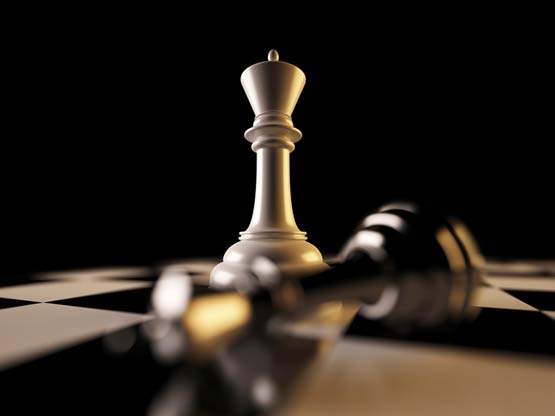 Does information really want to be free? That's the question hanging over the world chess championship match being contested this month in New York City. On the board is an exciting battle between Magnus Carlsen of Norway and his challenger, Sergei Karjakin, currently tied at one and a half points each. Off the board is a dreary but important legal battle over who gets to transmit the moves to fans around the globe. Anyone interested in technology and intellectual property should care about the outcome.

Asked to imagine a chess game between two grandmasters, most of us would picture an atmosphere of austere cerebral conflict, each sitting like a stone, chin in hand, neurons firing furiously as they calculate move and countermove. And to some extent that's what happens. But over years, a nagging question has gone unanswered: Who exactly owns the masterpiece the contestants are creating on the board?

Agon Ltd., the company that is sponsoring the match, says it does. At least it claims to own the exclusive right to transmit the players' moves in real time. I should explain that where once chess fans followed major tournaments and matches via newspaper columns or even books published months or years later, nowadays one simply logs into one of the many available sites and watches the game unfold on a virtual board.

But Agon, beginning this year, has insisted upon a legal right to decide who can transmit the moves in real time and who can't. Its goal is to drive all that internet fan traffic to its own site, where it charges a fee to view the moves as they happen. (Some competing sites offer free access to those who want to view a virtual board or see commentary; others charge for the same service. Only Agon's site has live video of the match, and no one is disputing the company's exclusive right to provide and charge for that service.)

Now Agon is again threatening legal action against sites that transmit the moves without the company's permission. The company has tried this technique before, without much success. So far, the efforts to obtain an injunction have been unavailing. A federal judge told the company that transmitting the moves was "robust reporting" and in the public interest.

Agon, which says it needs to limit transmission by others to break even on the match, may nevertheless sue for damages, and plans an appeal. As a longtime teacher of intellectual property, I don't think the law is on the company's side.

The chess historian Edward Winter reminds us that this is no new question. For example, in the 1911 negotiations for a championship match between titleholder Emanuel Lasker and his challenger, José Raul Capablanca, Lasker insisted that he would own exclusive rights in the games. Winter quotes the young Cuban's gently scathing reply:

"A chess game, from its very nature and the manner of its production, must be the joint property of the two persons producing it. ... You can charge what you like for the publication of the games in any form you may deem to your advantage. But, unfortunately, that is a common privilege, of which anyone may take advantage."

The question is whether live transmission of the moves should also be treated as "a common privilege."

Although Agon has also sued (and lost) in Moscow, let's stick with U.S. law. Courts have struggled for a century over the balance between the need for the creator of a valuable event to obtain a return and the freedom of competitors to present to the public what are, after all, merely factual accounts of things that have occurred.

The best-known case on the subject is International News Service v. Associated Press, a 1918 decision in which the U.S. Supreme Court held that a competitor could not copy the news from the organization that had written it up and then present the result as its own work. Over a sharp dissent from Justice Louis Brandeis, the majority concluded that the copying of news gathered at enormous risk and expense amounted to unfair competition.


The case might seem to help Agon's argument a bit, but scholars and courts alike question whether it is still good law. Perhaps a better point of departure is Pittsburgh Athletic Company v. KQV Broadcasting, a 1938 decision by a federal district court. The plaintiff, owner of the Pittsburgh Pirates baseball team, had sold to two radio stations the exclusive right to broadcast the games played at Forbes Field. The defendant also broadcast a play-by-play account of the games, via information gleaned "from its own paid observers whom it stations at vantage points outside Forbes Field on premises leased by defendant." The court ruled for the Pirates, explaining that in light of the "great expense" involved in maintaining the ballpark and fielding a team, it was "perfect clear" that the team had the right to grant an exclusive broadcast license.

Pittsburgh Athletic might seem to offer strong support for Agon's argument, were it not for National Basketball Association v. Motorola, decided in 1997 by the U.S. Court of Appeals for the 2nd Circuit. Motorola was selling a device called the SportsTrax, which among other things (in the pre-smartphone age, obviously) would constantly update the scores and statistics from professional basketball games. The NBA sued -- and lost. The court ruled that a sporting event cannot be the subject of authorship the way a movie or a book can, and therefore cannot be copyrighted. At the same time, the panel explained, the Copyright Act preempted any effort to litigate the same issue under unfair competition law. A sports team can own the images, but it cannot prevent someone from updating fans as to how the game is going. Were the rule otherwise, none of us could follow a game on Twitter.

Applying this approach to the chess championship, it seems clear that Agon owns the video and can charge admission to watch the games in person. But transmitting the moves is simply an act of updating -- which anyone is free to do.

I love chess, and I am quite looking forward to an exciting match between Karjakin, the heavy underdog, and Carlsen, who has yet to lose a championship match. The moves undeniably have value, and I am among hundreds of thousands of chess fans around the world who are following the games live. I entirely understand that if the organizer can't make money, there might be no match at all. But demand for information is shattering traditional intellectual property barriers. Chess moves are just data, no different from who just threw a pick-6 on "Monday Night Football" or who just got killed on "The Walking Dead." Agon is entitled to make a profit, but not by limiting the flow of information which, after all, just wants to be free.