In epic clash with George Will over book, Bill O' renounces journalism 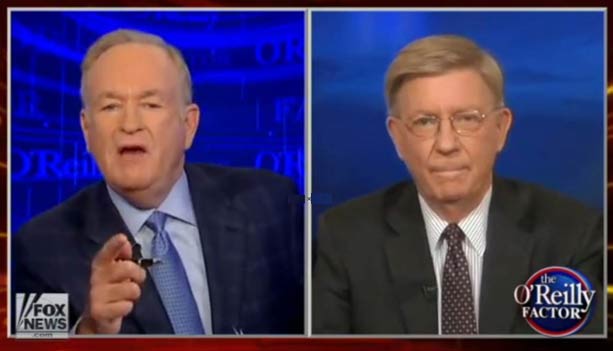 The Friday night edition of "The O'Reilly Factor" featured something that doesn't happen enough on cable news: Two people from the same network ripping the guts out of each other over a topic of some intellectual heft. The combatants in this one? Fox News host Bill O'Reilly and Fox News commentator George Will.

The antagonism was already in place before the Friday broadcast, as Will had used his perch as a columnist to deliver a slam on O'Reilly's "Killing Reagan."

"Bill O'Reilly Slanders Ronald Reagan," wrote Will, criticizing the book for its contention that the assassination attempt against Reagan in March 1981 had weakened him over the course of his presidency.

Let's put aside the history for one second, however, and showcase the harsh words that flew back and forth between O'Reilly and Will on Friday night:

"After reading the column, I can say with certainty, George Will libels Bill O'Reilly."

"You're in with the cabal of the Reagan loyalists who don't want the truth to be told." "You are actively misleading the American people."

"You're something of an expert on actively misleading people."

"Your book does the work of the American left with its extreme recklessness."

The throwdown is much more profitably viewed than abridged, though the central conflict merits commentary.

At the center of the dispute are the events of early 1987 in the White House of Ronald Reagan. A memo dated March 1 and delivered to Chief of Staff Howard Baker presented concerns from White House aides about whether Reagan was all there.

A previous book on Reagan - "Landslide" by Jane Mayer and Doyle McManus - went through the report: "They told stories about how inattentive and inept the President was. He was lazy; he wasn't interested in the job. They said he wouldn't read the papers they gave him - even short position papers and documents. They said he wouldn't come over to work - all he wanted to do was to watch movies and television at the residence."

The author of the memo, James Cannon, later repudiated it, though O'Reilly and Will clashed over why: O'Reilly claims it was done under pressure from above; Will laughed at the notion that O'Reilly had any clue about the circumstances.

In criticizing O'Reilly's grasp of the nitty-gritty, Will noted that the "Killing Reagan" squad - O'Reilly and researcher Martin Dugard - didn't apparently even have a copy of the Cannon memo when they wrote the book, as evidenced by a post-publication request from Dugard to the Reagan Library (as reported by the Erik Wemple Blog).

"I do not understand how you vet a memo you've never seen," said Will.

O'Reilly started the whole tilt by claiming that Will had promised Michael Clemente, one of Fox News's top executives, that he'd contact O'Reilly before writing his "slander" column on "Killing Reagan."

"We have it in writing that you were supposed to call me and you did not call me and by writing a provocative column like this, you had an obligation as a journalist to do that," said O'Reilly.

If Will indeed had pledged to call and failed to do so, that's on Will. But what Will wrote was essentially a book review --- a verdict on a written piece of history; as such, there is really no journalistic obligation to check in with the author.

For the media critic, the most exciting part of the back and forth wasn't the insults. It was where Will managed to get O'Reilly to admit that "Killing Reagan" didn't result from a serious act of inquiry:

Will: "You, who began this interview by saying I had a moral obligation to call you before writing a column about your book, wrote a book without feeling any obligation to talk Ed Meese, George Shultz, Jim Baker any of the other people who could have refuted the thesis."

Will: "Because they would have refuted the flimsy thesis you have. . . ."

Think about the backdrop here: "Killing Reagan" is the fifth in a series that includes "Killing Jesus," "Killing Lincoln," "Killing Patton" and "Killing Kennedy." Unlike most or all of those previous projects, "Killing Reagan" offered O'Reilly and Dugard an enticing opportunity to do some heavy-duty original reporting, as opposed to relying mostly on previous works and documents and the like. Meese, Schultz, Baker et al. surely do have "skin in the game" --- which is precisely why they can and must be consulted.

As should those who may rebut their memories.

Once all that material is collected, O'Reilly and Dugard could have sifted through it all and presented the results to readers.

But doing all that requires time --- more time than the "Killing" series' yearly deadline might allow.