How Ahmad Chalabi survived his war to free Iraq 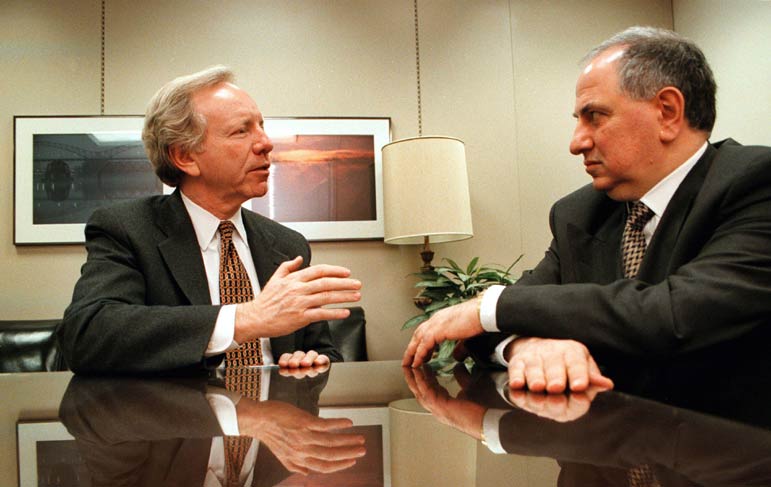 I first met Ahmad Chalabi in the spring of 2000. At the time, I was the Washington correspondent for the English-language edition of the Forward. The editor, Seth Lipsky, told me to wear a suit and a tie and to bring him a gift befitting a man of his stature. I asked one of his aides what he might want, and was told to bring fresh fruit. I arrived at a Georgetown townhouse 45 minutes later bearing a makeshift basket of mangoes, bananas and peaches.

In that meeting I first came to know a man who would later be blamed for conning the U.S. into the Iraq war. Chalabi died of a heart attack on Tuesday, and there have been plenty of unkind obituaries. But in 2000, Chalabi was a man on the rise. He had supporters in Congress on both sides of the aisle. In the media, he also had forged friendships with elite journalists including Patrick Cockburn and Christopher Hitchens.

It's easy to understand the appeal of Chalabi in the late 1990s and early 2000s. He was selling regime change for a country ruled by the worst dictator in the Middle East. Iraq's middle class had fled the nation in the 1980s and 1990s, and anyone who bothered to listen to these exiles knew that Saddam Hussein and his sons were monsters. Here was a brilliant polymath pushing a plan to return Iraq to the Iraqis.

But it wasn't just that Chalabi opposed Saddam. It was also a time when the Washington foreign policy establishment believed there was very little American power could not accomplish. President Bill Clinton was pushing for peace between the Israelis and Palestinians until his last day in office. The establishment view in 2000 was that Clinton was wrong to wait so long to intervene in the Balkan civil war, and wrong to choose not to intervene at all in the Rwandan genocide. As Clinton's secretary of state, Madeleine Albright, famously quipped to Gen. Colin Powell: "What's the point of having this superb military you're always talking about if we can't use it?"

It would take the 2003 Iraq war for this conventional wisdom to turn. And Chalabi of course played a role in selling that war. His organization introduced defectors to journalists who falsely claimed Saddam possessed weapons of mass destruction and fostered ties with al-Qaida. While none of that information made its way into official U.S. intelligence estimates, or Powell's speech making the case to the U.N., those leaks did help create the political environment to support the 2002 authorization for the Iraq war.

The Central Intelligence Agency never liked Chalabi. The agency blamed him for sabotaging an attempted coup in 1995 against Saddam. Chalabi said he was warning that the plan wouldn't work. The CIA also correctly sounded the alarm over the unreliability of Chalabi's defectors. He didn't make matters any easier for his relationship with the U.S. government when he was later asked about his pre-war intelligence and told the Daily Telegraph, he and his exiles were "heroes in error."

But in another important respect the CIA got Chalabi wrong. The agency in the 1990s and early 2000s supported another Iraqi exile, Ayad Allawi, who eventually was named the interim prime minister of Iraq before elections in 2005. In 2004 when U.S. contractors raided Chalabi's compound -- ostensibly over corruption charges -- the CIA predicted his political career in Iraq would be finished.

But Chalabi did not go away. In 2004 and 2005, Chalabi helped create the United Iraqi Alliance, a political coalition of Shiite nationalists that ended up sharing power with a rival Shiite faction known as the Dawa party. Chalabi was rewarded in subsequent governments and rose to become a deputy prime minister. In 2014, he was considered a candidate for prime minister to replace Nori al-Maliki. When he died, he was the chairman of the Iraqi parliament's finance committee.

At the same time, Chalabi's post-American political career also proves that his supporters back in the 2000s also ended up getting him wrong. Chalabi's political allies at the time, men like Moktada al-Sadr, were militant, fundamentalist demagogues. They were the party of the brutal Shiite militias that are today -- along with the Islamic State -- breaking Iraq apart. Even though Chalabi in private was a secular man, he was happy to play the role of a Shiite Islamist. His organization was also happy to align with the Iranian-supported special groups who were targeting U.S soldiers in 2007. This was all a far cry from the hopeful democracy Chalabi promised audiences in Washington.

Today these Shiite militias are on the rise in Iraq. The U.S. has even forged a kind of don't-ask/don't-tell alliance with them against the Islamic State. The last time I saw Chalabi, in January, he told me he too worried about the militias. But he also correctly pointed to the sorry state of Iraq's military, and said Baghdad had no choice but to rely on these forces to protect the capital from the Islamic State.

My last visit with Chalabi was at his family's gated estate in Baghdad. When he found it in 2003, it was in disrepair. Today there are fruit trees and gardens and a home furnished with exquisite antiques. Outside its walls is a great capital that still suffers from a war that followed the fall of a monster.