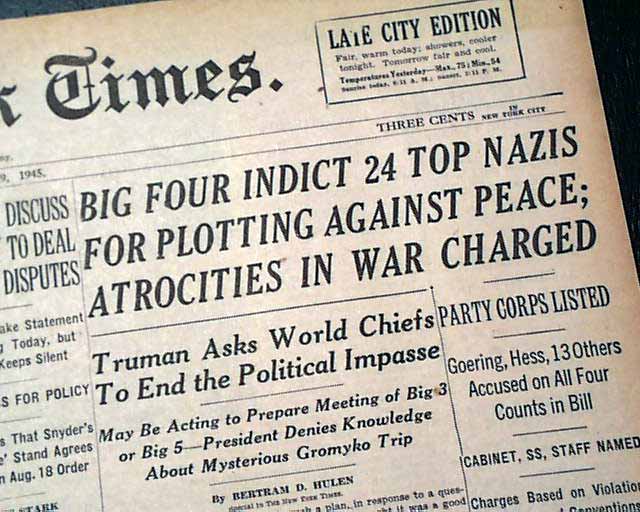 The Nuremberg trials opened 70 years ago this month with every prospect of ending in disaster. Nuremberg was the first time in modern history that the victors of a war decided to treat a defeated European enemy as criminal. The prosecution faced one overwhelming problem: There was no clear legal authority to say that starting a war was a crime under international law.

Today we often think of the Nuremberg trials as having been about the Holocaust. But in fact the prosecution team, led by U.S. Supreme Court Justice Robert Jackson and including British, French and Russian lawyers, focused on the theory that Germany's crime was to have engaged in "aggressive war."

There were multiple problems with treating the Holocaust as a crime in itself. The full scale of the murder was not yet understood. None of the Allies wanted to make it appear that they had sacrificed and fought World War II on behalf of Jews, which in any case would've been false. And there was no clear rule of international law that made it a crime to discriminate against your own citizens. Segregation was still constitutional in the U.S., making it particularly awkward for the Americans to treat Nazi anti-Semitism as a matter for outsiders to judge. In the end, the way the prosecutors could incorporate crimes against Jews and others was to say they were adjunct to the crime of aggressive war.

It fell to Jackson to explain to the International Military Tribunal how, exactly, the Nazis were guilty of crimes under international law. Jackson had been a skilled trial lawyer and an extraordinarily successful solicitor general, having argued the Franklin Roosevelt administration's cases before the Supreme Court. You can watch excerpts online, and they reveal the confidence of his oratorical style.

Yet in a formal legal sense, Jackson's case suffered from notable weaknesses. There was no single principle or treaty of international law that made it a crime to start a war, aggressive or otherwise.

One treaty, the Kellogg-Briand Pact of 1928, condemned war as a "solution of international controversies." Its signatories, including Germany, renounced war "as an instrument of national policy." But to condemn something or renounce it is not the same in law as making it a crime.

In his address, the opening statement of the trials, Jackson first tried to finesse the issue by claiming that aggressive war had been outlawed by the custom of nations, reflected in gradually emerging international consensus. His punchline was that, although the "world's statesmen" had been "less explicit than we might have hoped," nevertheless, "the 1920s did outlaw aggressive war."

The trouble with this line of argument was that Germany was a member of that community of nations, and it plainly hadn't gotten the memo. Custom was supposed to reflect the universal practice of civilized nations. All Jackson had to say in response was that if Germany had failed to understand that custom, so much the worse for it.

Realizing the difficulty of his position, Jackson made a second, distinct argument -- one of remarkable brilliance, as well as remarkable honesty. He told the tribunal that perhaps it was true that the Nazis hadn't committed a crime under international laws that existed before the war, and were therefore now being tried under a brand-new law. Even if the law was new, Jackson insisted, "I still do not shrink from demanding its strict application by the tribunal."

Jackson had a clear reason for why the tribunal should apply law to the Nazis, even if that law was being invented for the occasion: It was necessary to try the Nazis to advance the rule of law itself.

Innocent people had died fighting the Nazis, and so it followed, Jackson claimed, that the law itself could be advanced by executing guilty ones such as the Nazis. "I cannot subscribe to the perverted reasoning," he said, "that progress in the law may never be made at the price of morally guilty lives."

All this, Jackson insisted, was a matter of simple logic: "The common sense of mankind demands the law shall not stop with the punishment of petty crimes by little people."

Jackson was saying that, in the wake of World War II, law itself as a tool of civilization was at stake. If the law could not be used to try to punish Nazis, it was essentially useless. Therefore, law must be used -- regardless of the technicalities.

The tribunal accepted Jackson's relentlessly pragmatic logic. It, too, had no better answer to the core problem of whether existing law justified the trials. In essence, Nuremberg became a long-term gamble on whether the rule of law could actually be advanced by breaking the core legal principle that no one should be punished without having violated identifiable legal rules.

The effort had prominent critics. Supreme Court Chief Justice Harlan Fiske Stone, observing the events from Washington, wrote to a friend that "Jackson is away conducting his high-grade lynching party in Nuremberg." Stone clarified: "I don't mind what he does to the Nazis, but I hate to see the pretense that he is running a court and proceeding according to common law. This is a little too sanctimonious a fraud to meet my old-fashioned ideas." The chief justice was (privately) condemning the tribunal as victors' justice.

Yet at the distance of 70 years, it's possible to say that Jackson's Nuremberg wager paid off. Today we imagine the trials as a vindication of the rule of law, precisely as Jackson intended. The legal technicalities are largely forgotten, or they have been transformed through our retrospective belief that because the Holocaust should have been the focus of the trials, it was.

Nuremberg, then, deviated from the rule of law to strengthen the rule of law. If that makes you queasy, it's a sign you have a well-developed sense of justice, even toward moral monsters. You might not think the experiment should be repeated. But secretly, you probably are happy about the outcome. I know I am.