It's the ideology, Stupid 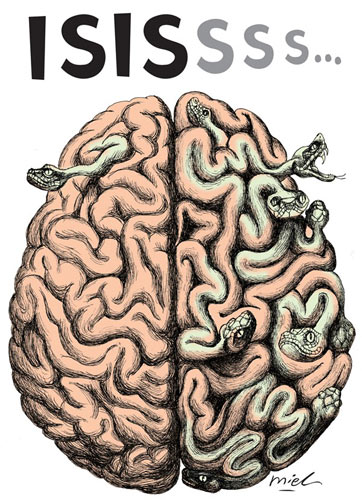 It seems to escape most liberal politicians that it's necessary to examine what drives our enemies to be our foes. I grew up during the Cold War and while the fear of nuclear annihilation was ever present in the minds of the youth my age, I did not believe that the Russians could be stupid enough to want that result. Today, many regard China as our number one adversary but once again, I do not see that country as self destructive. Our worst and most dangerous enemy today is the Islamist fundamentalist who welcomes death as his ultimate goal.

Atheists are always mocking my religion. "Virgin birth, resurrection on Easter Sunday? Ridiculous nonsense." Yet you rarely hear the cowards ridicule the precepts of Islam and what jihad means. Of course, the masterminds of global terrorism manage to stay alive while recruiting the brain dead by offering them dreams of paradise and 72 virgins. One of the funniest posters I've seen show a bunch of nuns in habits with heavy duty rifles and guns and the caption asks, "Are these the virgins awaiting the jihadists in heaven? "

I remember watching a TV show called The G0D Squad which was hosted by a priest and a rabbi. One episode introduced viewers to the five pillars of Islam which were explained by a woman wearing a traditional Muslim hijab. I found her description very interesting and thought some aspects of it was similar to my Christian ethos. We pray, sometimes we fast, we profess our faith to one G0D and we give to the poor. I'll bet that most supporters of Islam as the religion of peace truly believe this euphemistic description of what has become the deadliest religion of all. Since 9/11, however, we've learned the religion of peace is no longer in existence.

Yet, liberals and especially the Democrat Party and our president refuse to recognize Islam's fundamentalist ideology as the force behind global terrorism. What's their solution?

How about the brilliant one offered by kool-aid drinker Madonna?

She was moaning and crying over the dead in Paris but I wonder how she felt about the 147 killed last April at a Kenyan University .USA Today reporter Tonny Onyulo writes: "The Somali-based Islamic terrorist group al-Shabab claimed responsibility for the attack — the al-Qaeda-linked organization's deadliest in Kenya. Students said the gunmen separated Christians from Muslims and held hostages in a dormitory, where they placed explosives around the Christian hostages, according to Kenya's National Police Service."

Now we will hear from Muslims pleading and urging us not to take out our hatred on innocent Muslims who have nothing to do with these attacks. Well, in a way by their silence and lack of cooperation with law enforcement in tracking down the terrorists, they are far from innocent.

I read of an incident in Orlando, reported by CAIR, that shots were fired at a Muslim family's home and that mosques are receiving death threats. I'll take that with a grain of salt, thank you. Look at the past incidents which I wrote about back in 2010:

When an Arab cab driver in New York City had his throat slashed by a young white man, the media was quick to blame the attack on the right-wing hosts on talk radio and Fox News. The national executive director of the Council on American-Islamic Relations, Nihad Awad, blamed the incident on the heated debate over the (Ground Zero) mosque and the protests. He said in a statement: "As other American minorities have experienced, hate speech often leads to hate crimes. Sadly, we've seen how the deliberate public vilification of Islam can lead some individuals to violence against innocent people."

But the accused attacker, Michael Enright, was a leftist supporter of the mosque, and the victim, Ahmed Sharif, a native of Bangladesh, opposed the mosque. That didn't quite fit the leftist scenario so the blogs left these details out or buried them. They turned instead to those mosque burnings in the evil Bible Belt by those crazed Christians.

Well, actually, if there was a mosque burned in the South, it was probably torched by white supremacists, the same group of people that have been burning churches and synagogues for decades. In Georgia, however, the surprise arsonist was a Muslim himself, an illegal alien from Gambia. Tamsir Mendy was charged with arson and held without bail for torching a mosque in Marietta. Now why would he do that?

For that matter, why would a Democrat operative vandalize a Democrat campaign office? Maurice Schwenkler, a left-wing canvasser for a Democrat candidate, smashed 11 windows at Denver, Colorado Democrat headquarters last year. At first, the vandalism was blamed on Tea Party protesters of the Obama health-care bill. Did the Marietta arsonist burn his own mosque to place the blame on anti-Muslim hate speech too?

Consider also the outrage that the media raised when a charred Koran was left at a mosque in Virginia and brought national media attention as a possible hate crime against Muslims. Members of the Islamic Center of Blacksburg found the burned religious text in a plastic bag near the front door of the building. As it turned out, however, the burned Koran was left there by a traveling Egyptian Muslim who confirmed that he left it at the mosque because it had been damaged in a house fire and he didn't know how it should be disposed of properly.

The fact is, if we were a vengeful nation, after 9/11/2001, we would have moved all Muslims into internment camps as we did the Japanese and Germans in WWII. As powerful as we are we could have bombed Mecca and Medina and most of the Middle East. We didn't because we are a good nation. Our ideology is peace, love of family and freedom for all. Since the jihad's goal is death, we fight them by helping them achieve that goal.