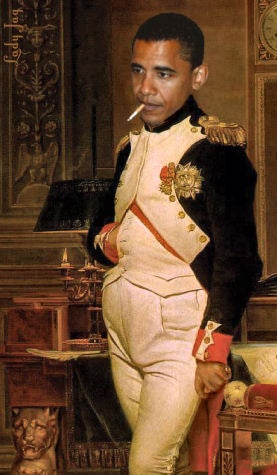 Something like that happened to the Democrats in Tuesday's midterm elections, as they lost the , a few more seats in the House and additional governorships. They came on with the same old strategy, but this time they went down with it.

Obama and the Democrats chose not to defend the administration's record of the last six years. On foreign policy, no Democratic chorus seconded Obama's 2013 claim that this chaotic period in world affairs has been the most stable time in recent memory.

Democrats did not argue that Obama had rightly distanced the U.S. from .

Could Democratic candidates have pointed to the -- the Iranian bomb-making efforts, the civil war in , the collapse of post-surge , the rise of the Islamic State -- to confirm Obama's diagnosis that these were mostly manageable problems?

On the home front, why didn't Democratic candidates run on their own prior overwhelming support for the Affordable Care Act, which passed without a single Republican vote? Could they have told voters that at some future date, Obamacare, as promised, really would lower premiums and deductibles, reduce the deficit, expand coverage, and ensure that people could keep existing plans and doctors?

Could a few Democrats have at least made the re-election argument that stimulatory policies of adding in new debt, maintaining continual near zero-interest rates and approving a stimulus had led to a robust recovery after the end of the recession in mid-2009?

Obama certainly believed in government -- the bigger, the better. In both of his successful presidential elections, he had run on the promise of both expanding the federal government and competently running it. So why were there not Democrats claiming positive changes in most federal agencies -- at least those other than the , NSA, ICE, GSA, VA, , the and the Secret Service?

If Democrats didn't wish to run on their party's past record, why didn't they promise to fulfill Obama's incomplete agenda that was short-circuited by the loss of the House in 2010?

In 2009, the Democratic House had voted to pass a cap-and-trade bill under Obama's direction, but it was never passed by the . Why didn't Democratic candidates vow that they would see it through in 2015? Or promise to reject the Keystone XL Pipeline for good? Or vow to keep with the Obama agenda of curbing new federal leases for gas and oil exploration?

Couldn't the Democrats have pointed to Obama's handling of the Ebola crisis, lauding his choice of , fixer as a medically savvy, hands-on Ebola czar? Or to the president's dynamic air war against the Islamic State?

Democrats understandably chose to ignore both what they had voted for in the past and what they were likely to support in the future.

Instead, they ran on the same old progressive idea of community organizing to get out the base. Obama was the past master of this strategy: Energize American voters by contending that we have been separated by race, class and gender; claim that conservatives have been waging pitiless war against blacks, Latinos, gays, women and the poor; and then cobble back together the aroused and aggrieved interests to form a majority.

So why, after prior successes, did Obama's race/class/gender attack finally sputter out like the French at Waterloo?

Unhappy voters thought the anemic economy, Obamacare, the collapse of U.S. foreign policy, the scandals in government and the incompetent handling of everything from the Islamic State to Ebola were the only real issues. Democrats' refusal to acknowledge them did not make these failures go away.

After three elections, voters finally caught on that Obama's faults were not in the stars, but in himself. They apparently tired of the usual distractions from a dismal presidential record.

Republicans assumed that Obama was always the issue, ran against his policies, and rarely offered much of a comprehensive alternative agenda. It worked, but it left a question unanswered.

At Waterloo, it was never quite clear whether redcoats had won the battle or Napoleon's veterans had blown it.

In the same manner, did the Republican agenda win on Tuesday, or did the predictable Democrats simply lose?