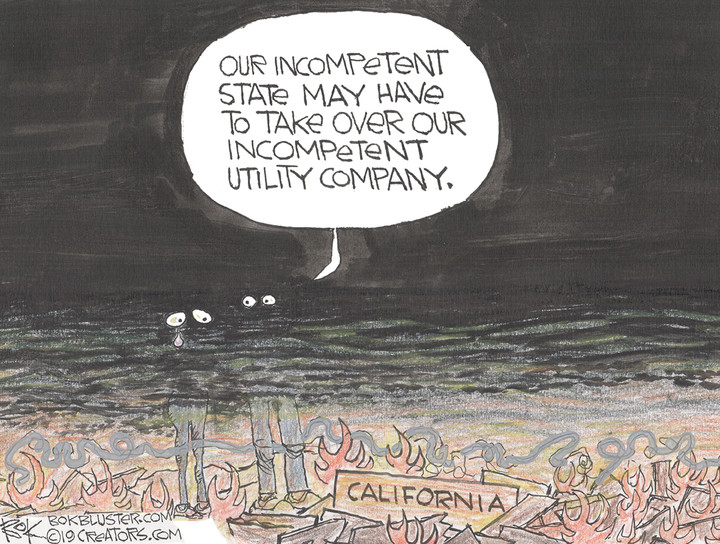 California is staying true to its reputation as the land of innovation -- it is making blackouts, heretofore the signature of impoverished and war-torn lands, a routine feature of 21st-century American life.

More than 2 million people are going without power in Northern and Central California, in the latest and biggest of the intentional blackouts that are, astonishingly, California's best answer to the risk of runaway wildfires.

Power -- and all the goods it makes possible -- is synonymous with modern civilization. It shouldn't be a negotiable for anyone living in a well-functioning society, or even in California, which, despite its stupendous wealth and natural splendor, has blighted itself over the decades with misgovernance and misplaced priorities.

The same California that has been the seedbed of world-famous companies that make it possible for people to send widely viewed short missives of 280 characters or less, and share and like images of grumpy cats, isn't doing so well at keeping the lights on.

The same California that has pushed its electricity rates to the highest in the contiguous United States through its mandates and regulations doesn't provide continuous access to that overpriced electricity.

California Gov. Gavin Newsom, who has to try to evade responsibility for this debacle while presiding over it, blames "dog-eat-dog capitalism" for the state's current crisis. It sounds like he's referring to robber barons who have descended on the state to suck it dry of profits while burning it to the ground. But Newsom is talking about one of the most regulated industries in the state -- namely California's energy utilities that answer to the state's public utilities commission.

This is not exactly an Ayn Rand operation. The state could have, if it wanted, pushed the utilities to focus on the resilience and safety of its current infrastructure -- implicated in some of the state's most fearsome recent fires -- as a top priority. Instead, the commission forced costly renewable energy initiatives on the utilities. Who cares about something as mundane as properly maintained power lines if something as supposedly epically important -- and politically fashionable -- as saving the planet is at stake?

Meanwhile, California has had a decadeslong aversion to properly clearing forests. The state's leaders have long been in thrall to the belief that cutting down trees is somehow an offense against nature, even though thinning helps create healthier forests. Biomass has been allowed to build up, and it becomes the kindling for catastrophic fires.

As Chuck DeVore of the Texas Public Policy Foundation points out, a report of the Western Governors' Association warned of this effect more than a decade ago, noting that "over time the fire-prone forests that were not thinned, burn in uncharacteristically destructive wildfires."

In 2016, then-Gov. Jerry Brown actually vetoed a bill that unanimously passed the state Legislature to promote the clearing of trees dangerously close to power lines. Brown's team says this legislation was no big deal, but one progressive watchdog called the bill "neither insignificant or small."

On top of all this, more people live in remote areas susceptible to fires, in part because of the high cost of housing in more built-up areas.

California's overriding goal should have been safe, cheap and reliable power, a public good so basic that it's easy to take for granted. The state's focus on ideological fantasies has instead ensured it has none of the above.