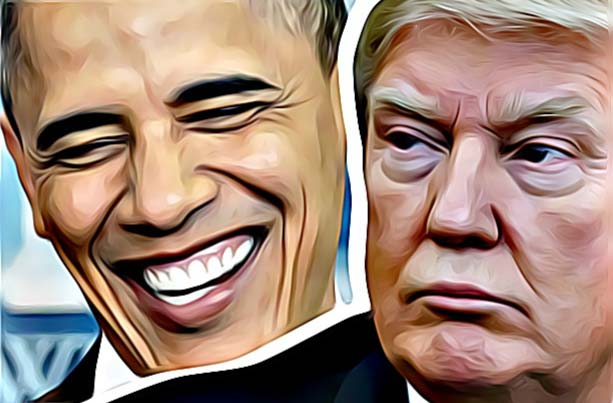 Barack Obama and Donald Trump are diametrically opposed figures, representing the categorical rejection of the other for their supporters, yet share significant foreign policy DNA.

They both defined themselves in opposition to George W. Bush's foreign policy. Obama probably wouldn't have defeated Hillary Clinton for the 2008 Democratic nomination if she hadn't voted for the Iraq war and if he didn't speak out against it at the time.

Likewise, Trump outpaced all his 2016 GOP rivals in denouncing our Middle East commitments.

Obama represented the internationalist Left, while Trump is the champion of the populist Right, and there are important policy differences between the two (Obama cut the Iran nuclear deal, Trump withdrew from it).

Yet, in his pullback from the Syrian border, exposing our Kurdish allies to a Turkish invasion, Trump now has his own version of Obama's foolhardy pullout from Iraq that created the opening for the rise of ISIS.

The cost of Trump's decision is a betrayal of the Kurds, a worsening relationship with Turkey, a possible lifeline for ISIS and a boost to the influence of Russia, which should be able to leverage it for continued strategic gains in the region.

There is no calculus where the benefit of making way for Turkey equals the harm. It'd be one thing if we were pulling 50,000 troops out of Syria after years of hard combat; instead, we initially re-positioned a couple of dozen guys on the border.

The equities might also look different if we had given the Turks the nod as an exercise in realpolitik, extracting some concessions from them (say, not buying the Russia S-400 anti-aircraft system); instead, we got nothing.

The pullback has managed, astonishingly enough, to alienate both the Kurds and Turkey from the United States.

Usually, given the historic enmity between the two, it's possible to alienate only one at a time. After we dumped them, the Kurds have fallen into the arms of the Assad regime, while Turkey will be as hostile to the United States as ever, once Congress gets done trying to punish it for its invasion.

Just like Obama's withdrawal from Iraq, Trump's pullback in Syria is a belated reaction to the Iraq war.

Obviously, there is no political support on the right or left for invading and occupying a Middle Eastern country with tens of thousands of troops again.

But there's a vast distance between the height of the occupation of Iraq, when we had 150,000 troops fighting a war of counterinsurgency, and our minimal commitment in Syria aimed at creating and supporting a proxy force to do the hard fighting against ISIS.

To throw both the Syria and Iraq interventions together under the rubric of "endless war" is to fail to make distinctions.

It's senseless to oppose a relatively cost-free action in Syria that has succeeded in its own terms (the ISIS caliphate has been defeated) because the Iraq war was fought for years at a high cost with dubious results. It'd be like opposing the invasion of Grenada because the invasion of Normandy required so much blood and treasure.

The longstanding American military reflex is to win and go home, but it's rare that even the most clear-cut victory is so neat.

We won a decisive conventional military victory in World War II in Europe, and we still have troops in Germany.

The first Gulf War is supposed to be the model of a rigorously limited commitment, but it still resulted in a no-fly zone over Iraq, the creation of an autonomous region for the Kurds in the north and a constant effort to enforce UN sanctions.

Nor is getting out as clean as advertised. Obama triumphantly exited Iraq, only to have to go back in when things spun out of control.