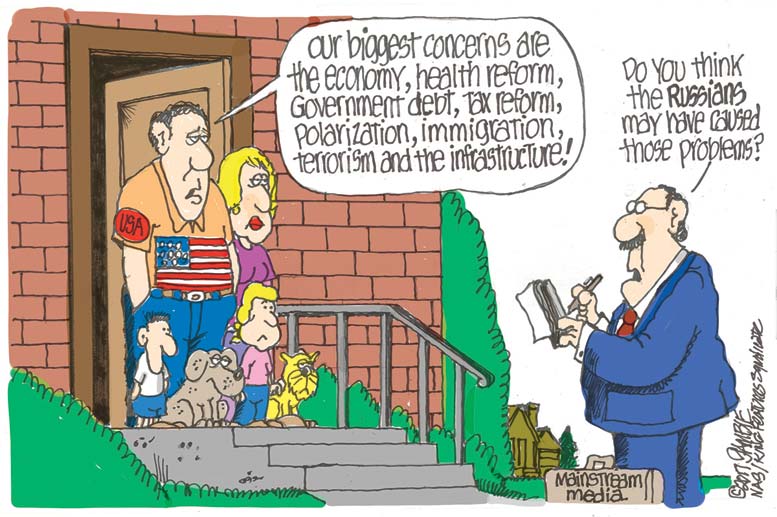 After three years, we're still on the Russia story. The locus has shifted 500 miles west from Moscow to Kiev, and now we are consumed with the Ukraine controversy rather than the Russia probe, though it's essentially the same thing — a battle over President Trump's legitimacy fought out with allegations of foreign interference.

Democrats are trying to widen the Ukraine controversy, which centers on Trump's mention of the Bidens on his call with his Ukrainian counterpart. They want to drag in his urging Ukraine, Australia and others to cooperate with William Barr's investigation of the origins of the Russia probe.

There's nothing wrong or unusual about a US president asking foreign leaders to provide information useful to his attorney general in an investigation. Why would there be? Except the president's detractors don't consider Barr's investigation above-board. In fact, they consider it another form of Trump's perfidy.

In its report on Trump's call with the Australian prime minister, The New York Times says — in a news report, mind you — that the call "shows the president using high-level diplomacy to advance his personal political interests." Trump is pleased with Barr's Â­investigation and would be even more pleased if it unearthed anything untoward. That doesn't make it merely a pet political project or mean that there isn't a genuine public interest in knowing in greater detail how and why the Russia story got started.

Trump is basically being accused of the entirely new offense of obstruction after the fact. There were many novel theories of obstruction advanced during the special counsel probe, but this is the most creative.

The Russia investigation figures into the Ukraine story in another way. It's not clear that even Democrats would consider his Ukraine call impeachable if it weren't for their belief that Trump has gotten away with so much previously, as catalogued in the Mueller report.

There was already backing in the House for impeachment prior to the Ukraine whistleblower, and House Judiciary Chairman Jerry Nadler already said he was conducting an impeachment inquiry.

Even the framework of the Ukraine matter reflects the Russia story. Trump's critics say he was asking for Ukrainian "interference" in our elections, when what was really going on was that he and Rudy Giuliani were interfering in Ukrainian politics. They were pushing the Ukrainians to undertake investigations, including, of course, into Joe Biden's actions in the country.

Trump publicly urges Ukraine, China to investigate Bidens If you accept the premise that any information developed in a foreign country and used in American politics is election interference, then Trump's opponents themselves were masters at leveraging Ukrainian interference during the 2016 election.

Giuliani's Ukraine adventure was motivated, in large part, by the desire to get to the bottom of this activity in 2016 and turn the tables on Trump's critics. (Instead, he appears to have turned the tables on himself.)

There will be lots of comparisons with the 1990s as the House moves toward impeachment. Yet, the 1790s might be the more apt comparison. Back then, at the outset of the republic, each nascent political party was consumed with the idea that the other was a tool of a foreign power, either France or Britain, and believed that the other was a fundamental threat to American democracy. It made for particularly vitriolic politics.

Today, the Democrats still have not gotten beyond the idea that Trump is somehow a tool of Russia, while Republicans point to Democratic coordination with shadowy foreign forces to get the Russia investigation rolling. Books fly off the shelves about Trump being an alleged fascist, and Republicans are gripped by a Flight 93 mentality that fears if they lose a presidential election, they will never win another one again.

The Russian story contributed to and fed off this feverish Â­atmosphere. For the longest time, it offered Democrats the hope of deliverance from a president whose election they never truly accepted. When Robert Mueller didn't have the goods, House Democrats were at sea for a while, until Trump's call and the whistleblower complaint brought impeachment deliciously back into play.

Ukraine is more an epilogue of the Russian investigation than the beginning of a new book.