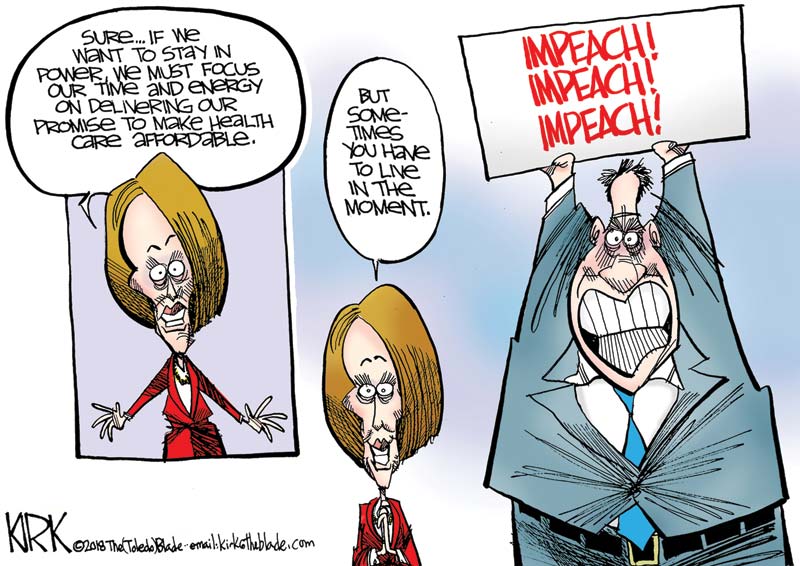 "We have to strike while the iron is hot," Speaker told her fellow as she launched an impeachment inquiry into President ill-advised phone call to Ukrainian President .

And so, in a spasm of revenge, she calls her to political war to invalidate the 2016 election they lost to Trump.

It's also obvious that are desperate, breathlessly so, to discredit Attorney General and career federal prosecutor before they report out what they've learned about the origins of the failed Trump-Russia collusion investigation, which was initially directed by Obama administration spymasters.

can't afford that, and the shrieking increases.

But if Americans find Democratic tactics to herd voters like livestock familiar, there is a reason.

Americans have seen this before, at the hands of the .

They should easily be able to imagine President of a few years ago, saying the same kind of thing to his about and hot iron in his hands.

Or perhaps they see Bush sitting by as his Rasputin, then Vice President , exhorted the pro-war neocons to support Bush and his ill-advised war in .

Bush's Iraq War was supposed to grow democracy in a land of barbarous dictators. It ended in disaster, with American soldiers and their families paying a terrible cost in blood and lives lost.

War is not politics. War is war. And politics is men and women in suits flapping their mouths for power and money.

But the tactics to arouse voters are painfully familiar in either pursuit: Urgent shouting to drown out opposition, desperate breathlessness, and the use of friendly media to ridicule and scorch opponents and shame or encourage the people to fall in line.

With Bush and , a largely compliant media -- and to my lasting shame I was part of that -- helped herd America to war. Protesters were marginalized, the threat of the weapons of mass destruction (that ultimately weren't there) was reason enough, or so we were told.

And Americans were also told that democracy would bloom in the desert and take root in a place that knew only the rule of brutal strongmen and dictators.

We were stampeded. And I promised myself I'd never join another stampede.

What we didn't see then, but see clearly now, were the consequences of Bush and his hot iron after the 9/11 terrorist attacks, including the slaughter in and the ethnic cleansing of Christians who'd been in the region since was on his road to Tarsus.

We also didn't see the inevitable collapse of the Republican political establishment.

Does the Democratic Party see the consequences of how impeachment affects the 62 million or so Americans who voted for Trump in 2016?

I've never been much concerned about Trump and his brutal rhetoric. His political survival involves nominating conservative Supreme Court justices, and many Americans will endure vulgarity to accomplish that. But the relentless and juvenile "Orange Man Bad" critiques in the media serve only to humiliate 62 million people.

They'd been marginalized and dismissed by bipartisan establishment elites for years, in rural and suburban America. Their silent desperation and pain were ignored, as was the loss of jobs, place and culture, and many died young from stress or embraced opiates to dull their pain.

They played by the rules. They knew they'd been betrayed.

They also knew who Trump was when they voted for him. They wanted revenge on the that had abandoned them. Trump was their blunt instrument, and he brought blunt-force fear with him to the palaces of on the .

In recent days, have been urgently trying to herd Americans toward embracing impeachment because the president asked Ukrainian to help find information about Democrat and his son, Hunter.

Was the phone call ham-handed? Yes.

Is it grounds for impeachment? No.

Trump opened by asking Zelenskiy to assist in the investigation of how the Trump/ collusion business began in .

American presidents are within their rights to investigate possible crimes overseas. The American people deserve to know exactly how the Trump/ collusion investigation began.

The Bidens are collateral damage. Would have had his $50,000-a-month gig with the Ukrainian natural gas company if his dad wasn't vice president and his name had been Hunter Krapnick? Any child from could explain it to you.

publicly bragged that he forced to rid itself of a prosecutor and threatened to kill a billion dollars in aid if his demands weren't met. Just being in as vice president, with his son cashing in, was a conflict of interest.

Striking while the iron is hot isn't always the best policy. It helps herd voters through fear, but the consequences are often unknown.

And sometimes they're disastrous.