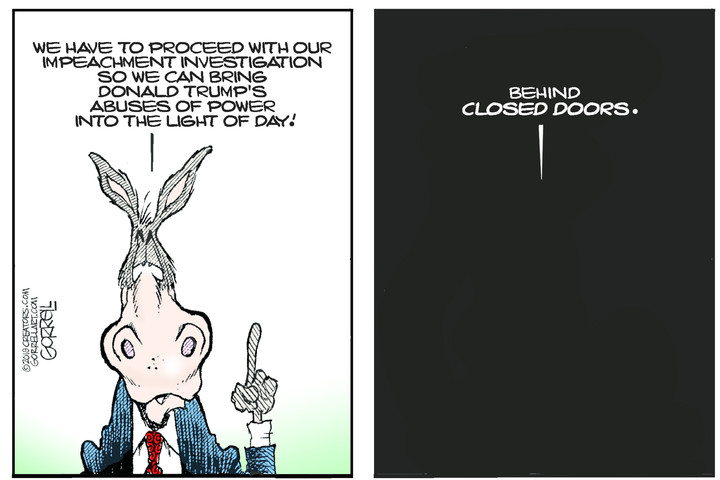 If you're following the House of Representatives impeachment inquiry into Donald Trump, you may be wondering why you aren't seeing video clips of testimony by crucial witnesses. The answer is: It's all happening in secret, not so much to protect national security, but to manage the political process of the inquiry.

There are some plausible reasons to justify the ongoing secrecy of depositions being made before the House Intelligence Committee. But the secrecy can't go on indefinitely. As the contours of the case against Trump become known, it's time for House Democrats to start moving towards public testimony and a more transparent inquiry.

This starts with a somewhat confusing state of affairs: Last week, the White House counsel defied Congress's constitutional authority and announced with some fanfare that the Trump administration was refusing to cooperate with the inquiry, which the counsel preposterously labeled as illegitimate and unconstitutional.

Yet despite this, some very important executive branch witnesses have testified since. They include the recalled U.S. ambassador to Ukraine; her deputy chief of mission, who was subsequently made the deputy assistant secretary of state with responsibility for Ukraine; and various other high-ranking officials with knowledge of Trump and Rudy Giuliani's efforts to pressure Ukraine to investigate Joe and Hunter Biden.

All of their testimony has been held in secret. This is different from past impeachment inquiries, like those into Bill Clinton and Richard Nixon, in which testimony took place for the most part in public, and before the House Judiciary Committee rather than the Intelligence Committee.

To be sure, investigators in those earlier impeachment inquiries spoke to witnesses in private before their public testimony. But the hearings were open to the public to watch on television.

Conservatives have begun to criticize the secrecy of the current process. Some of the criticism is obviously overstated: The whistleblower, for example, can't testify in public because by law, his identity needs to be protected. Yet the broader objection - that a matter of crucial national importance is taking place outside of the public eye - needs to be taken seriously.

One reasonable response is that the House is not yet pressing a case for impeachment; it's just investigating. The basic analogy is between this stage of the impeachment inquiry and a criminal investigation by prosecutors and the police or FBI. When prosecutors and police investigate crime, they don't do it in public. They talk to witnesses privately and secretly while they try to figure out what happened and decide if there is sufficient evidence to pursue a criminal case. Even grand jury testimony takes place in secret - and that secrecy is protected by law.

It's certainly true that the initial intelligence committee investigation resembles an early-stage criminal investigation. It's therefore plausible to reason that not every interview with a potential witness should be held in public.

But the analogy to an early-stage investigation should not be taken too far. It's often said that the constitutional function of the House in issuing an impeachment is similar to a grand jury issuing an indictment, and that the equivalent of a criminal trial is the trial before the Senate.

Yet it pretty clearly wouldn't be justifiable for the House to keep the entirety of its impeachment proceedings secret, the way grand jury proceedings are protected by secrecy. Impeachment is simply too important - and too political - to take place entirely behind closed doors. The analogy to the grand jury is therefore imperfect and incomplete.

Democrats have also tried to say that the current testimonies don't count as hearings but only as a series of depositions. In this situation, that's a distinction without a difference. In both congressional hearings and depositions held before congressional committees, witnesses testify under oath and answer questions.

Of course, as a political matter, there are some advantages to the Democrats in keeping the current testimony secret. In televised hearings, House Republicans would have the incentive to confuse the public by pressing the witnesses to talk about Trump's allegations of corruption against the Bidens, which would form an obvious distraction, at least from the Democrats' perspective.

(Republicans who think Trump's efforts were justified might see it as more of a core issue.)

But Republican efforts to confuse Democrats' narrative or change the subject are ultimately going to happen anyway, whenever public hearings begin. Democrats can't put it off indefinitely, and they shouldn't try to. Bipartisanship may be impossible in this politically charged environment. But House Republicans still have to be given a public voice in the hearings, no matter how they may decide to use it.

Now is the time for House Democrats to start signaling when and how they are going to move to public hearings. Many, indeed most, of the current witnesses will then have to be recalled and re-questioned. This time, both parties will know what they're going to say in advance. That may make the hearings less dramatic for the participants; but there will be much that is new to the public.

In the end, impeachment is - and was designed in the Constitution to be - a political process conducted by elected representatives. For that reason, its crucial steps must take place before the voting public. The time for transparency is, approximately, now.