The top 15 Democratic presidential candidates of 2020, ranked and tiered 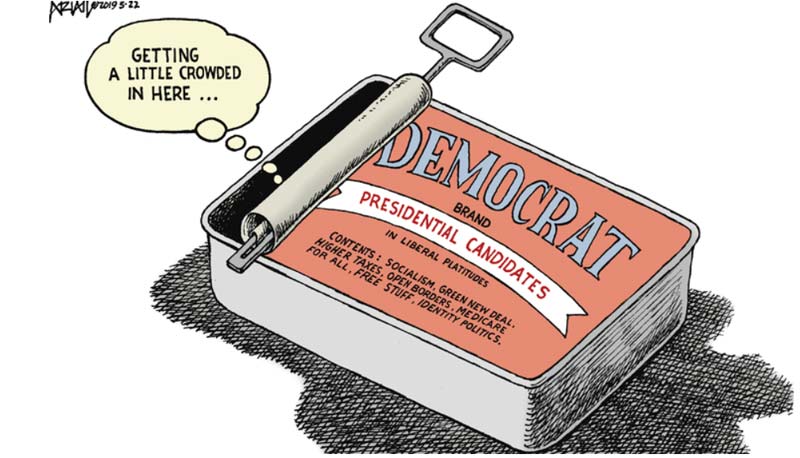 The fourth Democratic debate is Tuesday, which also happens to be the deadline for candidates to submit their third-quarter fundraising reports.

With that big week ahead, here's our regular ranking of the top 15 Democratic presidential candidates. As usual, this is in order of likelihood to win the nomination. And for the first time, we're breaking it into tiers.

15. Sen. Michael F. Bennet, Colo.: Of all the names on this list, nobody polls worse than Bennet. His RealClearPolitics average nationally is 0.5 percent. His averages in Iowa and New Hampshire are 0.0 percent. His $2.1 million raised in the third quarter is enough to keep the lights on, but without getting on the debate stage, for how long? (Previous ranking: 15)

14. Former congressman John Delaney, Md.: He's only slightly better than Bennet in the polls, thanks to being at 0.7 percent in Iowa - the state he's banking on to give him a seat at the table. But that's despite having spent a whole lot of (his own personal) money. (Previous ranking: 13)

13. Montana Gov. Steve Bullock: Fun fact: Bullock is the last remaining governor in the 2020 race. After missing the third and fourth debates, though, you have to wonder how long there will be any governors. (Previous ranking: 14)

12. Rep. Tulsi Gabbard, Hawaii: The Hawaii congresswoman is one of two candidates who didn't make the third debate but did make the fourth next week. But now she's threatening to boycott it over the Democratic Party's "rigged" primary process. I'd be surprised if she didn't show up, though. After all, why not just make that case at the debate? (Previous ranking: 12)

11. Businessman Tom Steyer: This will be his first debate, period. One interesting subplot: He's been beating the impeachment drum for months and months - long before many 2020 Democrats - including in TV ads. Now that there's an official inquiry, what's the message there? Climate change? More impeachment? (Previous ranking: 11)

10. Andrew Yang: Yang has been getting some heat for allegedly perpetrating Asian stereotypes. He has sought to combat it, but hasn't exactly apologized. "For me this was and is the best way that I can compete," Yang said recently about cracking self-deprecating jokes about being Asian American, according to the Los Angeles Times. (Previous ranking: 10)

9. Former congressman Beto O'Rourke, Texas: O'Rourke went big on calling for confiscation of assault weapons. Whether it was a calculated political move or not, it doesn't seem to have changed anything for him. And he has allowed Republicans who argue that Democrats are "coming for your guns" something to actually base that upon. (Previous ranking: 9)

8. Former housing and urban development secretary JuliĂˇn Castro: Castro has found his voice in this race, taking on fellow Democrats with no hesitation and speaking forcefully about President Trump. But he hasn't always been that kind of politician, as the New York Times reported this week. (Previous ranking: 7)

7. Sen. Amy Klobuchar, Minn.: Klobuchar is ahead of all the other names here because she's actually showing some life in Iowa, where her RealClearPolitics average is 4.7 percent. But that's her neighboring state, and she'll need to show some nationwide appeal, too. (Previous ranking: 8)

6. Sen. Cory Booker, N.J.: Booker told his supporters he needed a cash influx to stay in the race, and he says he has gotten it. Now he's apparently leaning heavily on Iowa. "I'm in it to finish first in the caucuses," he told CBS News this week. "That's what we're fighting for. And I believe we can. We have well over 100 days to do that." He's currently averaging 2.3 percent in Iowa, though. (Previous ranking: 5)

5. South Bend, Indiana, Mayor Pete Buttigieg: Something that has struck me about Buttigieg's poll numbers: He's often been one of the most popular candidates among Democratic voters - as in, as high as the second-most-popular candidate in the first two states, behind Elizabeth Warren. And he keeps raising big money. But he's not gaining in the polls quite yet. (Previous ranking: 6)

4. Sen. Kamala Harris, Calif.: Speaking of Iowa-first, Harris is apparently in on that, too - which, as with Booker, is probably a reflection of how much they need an early kick-start to keep things going. She has lost all of her post-first-debate bump and is basically back where she started in the polls. (Previous ranking: 4)

3. Sen. Bernie Sanders, I-Vt.: The big news, of course, is his recent heart attack. We can't pretend that doesn't matter for a 78-year-old candidate. There are also real questions about why his campaign didn't disclose it until a couple days later. (He bristled at the idea that they hid the news, saying it was a matter of figuring out what happened.) That said, even as he's lost some ground in the polls, he's clearly ahead of the others above and in the first tier. He really needs to show something, though - especially with Warren rising. (Previous ranking: 2)

2. Former vice president Joe Biden: He's up a spot from last month, given Sanders's lack of traction. But he doesn't seem to have a good answer for Trump's Ukraine attacks. That probably owes to the fact that, even if the allegations about his actions are way beyond the evidence, Hunter Biden's employment and lucrative salary at a Ukrainian energy company don't exactly look great. He probably feels wronged in that he has to talk about all this, but it's not going away. It's now the focus of an impeachment inquiry, so he had better figure out a message - and soon. (Previous ranking: 3)

1. Sen. Elizabeth Warren, Mass.: I've had Warren atop this list for a while, but now she's a significantly bigger favorite than before. She has recently taken the lead in some polling averages and in early-state polls. That owes in part to her opponents' stumbles, and in part to her own very strong campaign thus far. As Democrats begin to come to terms with the idea that she's probably their most likely nominee, we'll see how she holds up. (Previous ranking: 1)