Think the Dem debates haven't changed much? They have 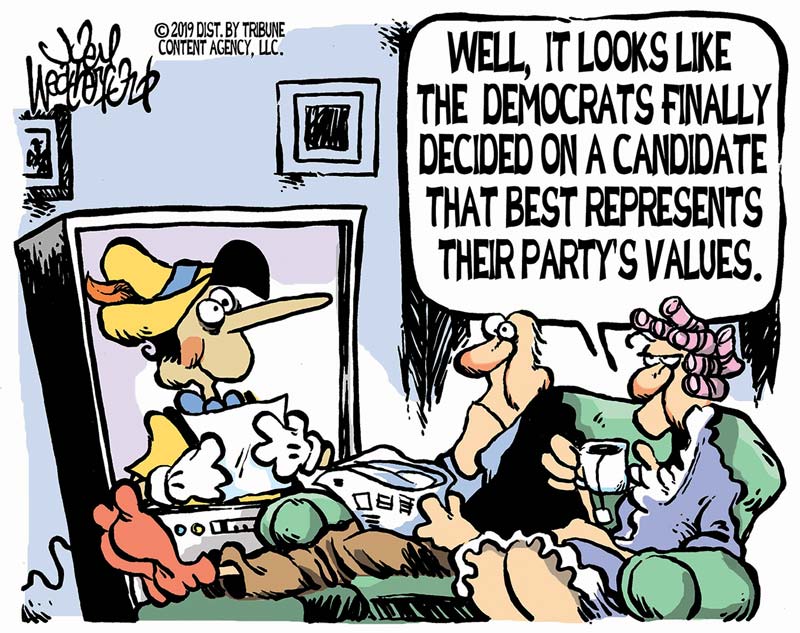 WESTERVILLE, Ohio - Twelve Democratic presidential candidates debated for nearly three hours here Tuesday night, and the question when they ended was the same as it has been after the previous debates: In what ways will it matter?

On one level, it's arguable that this debate won't materially change the Democratic nomination contest any more than the previous matchups did. After four debates, the people who were at the top of the field before the campaign started - former vice president Joe Biden, Sen. Elizabeth Warren, D-Mass., and Sen. Bernie Sanders, I-Vt. - are still the top three. The struggling candidates continue to struggle, with little to show for it.

At another level, however, these debates have played an important role in the Democratic race. The campaign today is not the campaign of six months ago. Reinforcing what has happened on the trail, the debates have revealed the disparate personalities seeking the nomination and have contributed to altered perceptions of their strengths and weaknesses.

Tuesday's debate was an echo of the previous three. In past debates, Biden, the perceived front-runner, was the target of attacks. On Tuesday, Warren, the rising candidate, came under sharp criticism from several rivals over the specifics of some of her many plans, the tone of her rhetoric and her repeated unwillingness to answer a direct question about health care and taxes.

There was another disagreement over whether Medicare-for-all is the best policy to ensure affordable health care or an expensive and disruptive pipe dream. The health-care issue has figured in every debate, an ideological divide that continues to separate those in the progressive wing from those on the center-left.

Biden began the campaign as the clear leader in the polls but with questions about his candidacy. He has had opportunities to put those to rest, though a series of shaky debate performances has put him in a more challenging position. Although he still is the co-leader in the polls, he is no longer seen as the dominant candidate. Some Democrats believe that his debate performances have contributed to his inability to consolidate his position at the start of the campaign.

Warren has benefited from a succession of steady and effective debate performances, reflecting the discipline she has brought to other aspects of her campaign. From the start, she has run her campaign on her own terms, an operation long on policy initiatives and energetic grass-roots organizing.

Her discipline and consistency have paid dividends politically, but as Tuesday's debate showed, she will become as much a focus of attacks from the other candidates as Biden. Her rise heightens the importance of the ideological divide that has been part of the backdrop of the Democratic nomination contest from the start, as well as questions about who is the most electable candidate.

Sanders has been steady in the debates but rarely the standout, and he continues to be a powerhouse grass-roots fundraiser. But he has lost support over several months, and now there is a new challenge to overcome.

The Ohio debate was Sanders' first major event since he suffered a heart attack, prompting questions about his health and age, though on Tuesday night, he was robust and vigorous on the stage. Busting in at one point, Sanders said, "I'm healthy, I'm feeling great."

The first votes are still months away, but already the campaign has run through several cycles of conventional wisdom. Earlier, Biden was seen as the person to beat, with all the others chasing him. Later, the race was considered a contest among four or five candidates: the top three plus South Bend, Indiana, Mayor Pete Buttigieg and Sen. Kamala Harris, D-Calif. Then it became a three-person race, and today some commentators wonder whether it is a two-person campaign pitting Biden against Warren. The shifting assessments are a reminder that more changes could come in the months ahead. Past campaigns have seen dramatic shifts between Labor Day and the results in Iowa and New Hampshire. Whether it is the surprise emergence of a dark horse or the unexpected collapse of a serious contender, fortunes change as more voters begin to check in and pay attention.

But getting attention is a constant challenge for all the Democrats. President Donald Trump is a master at setting and commanding the conversation, for good or ill. His dominance of the media's focus is unlike anything seen before. Democrats have had few moments this year when they weren't sharing the spotlight with the president, and that only in the best of moments.

On Tuesday, the debate was competing for attention with House Democrats' impeachment inquiry as well as the controversy over the president's decision to pull back U.S. forces in northern Syria, opening the way for Turkey to invade and take out Kurdish fighters who were U.S. allies in the fight against the Islamic State.

Trump isn't the only problem the Democrats face in gaining a hearing from voters. The sheer size of the field inevitably has drawn more attention to the best-known candidates. "The number of candidates makes it difficult for anyone to really break through except the front-runners," said Democratic strategist Stephanie Cutter. "When lower-tier candidates do break through, it's usually because of an attack, which doesn't necessarily gain them more support."

There are plenty of examples of that - of candidates scrambling to produce a viral moment, only to see it disappear quickly. Harris went after Biden in the first debate and saw her poll numbers spike. Ahead of the second debate, those numbers began to slide, and in that debate, she was attacked and faltered. Her poll numbers fell further, and she has yet to recover.

In the first debate, former housing secretary JuliĂˇn Castro attacked Beto O'Rourke, the former Texas congressman, on the issue of immigration. He was able to raise some money off the exchange but saw no significant rise in his support.

In a later debate, he hectored Biden, accusing him of not being able to remember something Biden had said minutes earlier, in what was widely seen as a veiled attack on the former vice president's age and mental fitness. The gambit rebounded against Castro.

"It's clear in this cycle that one good moment, one good jab, is not sufficient to move the polls," an O'Rourke adviser, speaking on the condition of anonymity to comment freely, said in an email. "We had a great moment last debate, and it didn't do much for us in terms of poll movement."

On Tuesday, Sen. Amy Klobuchar, D-Minn., trained her sights on Warren, attacking her fellow senator on health care, in particular on why Warren would not say whether her plan for Medicare-for-all would require raising taxes on middle-class Americans. Klobuchar has tried in previous debates to make her mark as a results-oriented moderate, without success. Whether Tuesday night will change that is debatable.

An adviser to one of the candidates looking for a breakthrough emailed this assessment: "The questions in the debate are disproportionately directed towards those who are already ahead in polls. Then the post-debate coverage is framed about what happened to and between those candidates. So it's largely a self-fulfilling prophecy."

For many of the candidates, the route to success is now more likely to come from developing support on the ground, starting in the early states, rather than assuming that a debate will provide the springboard.

"Anyone who thinks they're going to walk away with this nomination purely on the debate stage" is wrong, said Faiz Shakir, Sanders' campaign manager. "You're going to have to win all other facets of this campaign."

Tuesday's debate generated sharpness at all levels. It wasn't just lower-tier candidates attacking those at the top. In the final hour, Biden squared off against Sanders and Warren. His exchange with Warren was about who had gotten big changes enacted into law, and a brief moment of testiness was palpable, foreshadowing the campaign to come.