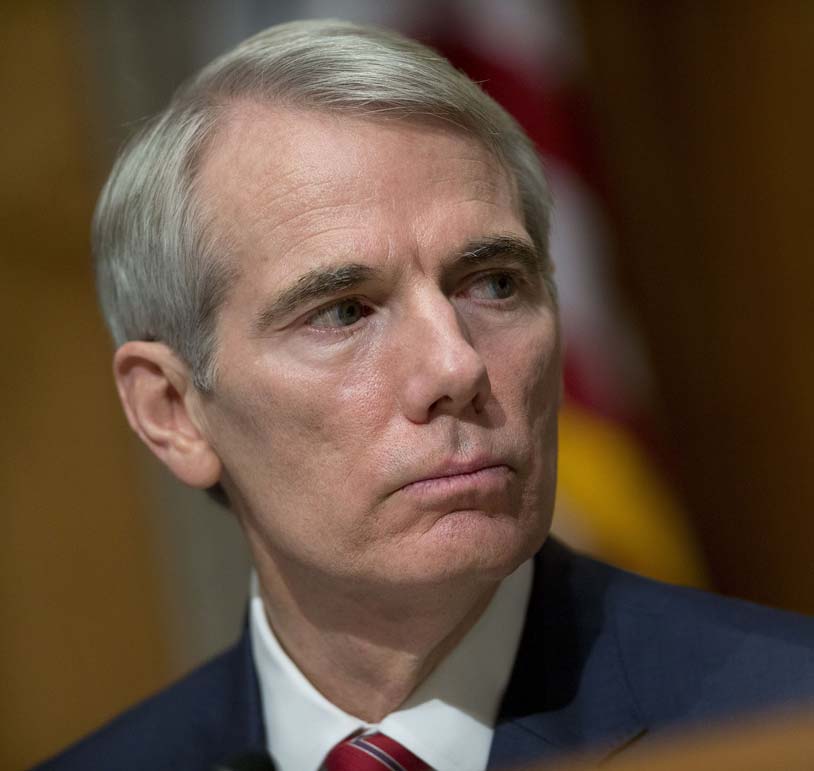 If you listened carefully to Monday's swearing-in ceremony at the White House for Supreme Court Justice Brett Kavanaugh, one name was mentioned briefly by President Trump that bears repeating.

The Ohio Republican senator was given the barest of acknowledgments by Trump ("Thank you, also, to Rob Portman, sitting right here"). Appropriately enough, that was soon after Trump had lauded Senate Majority Leader Mitch McConnell and right before he praised Maine Sen. Susan Collins.

Here are three reasons why Portman deserves more credit than he received (though Kavanaugh did thank him in his remarks) â€“ and why Portman may be a key player if there's such a thing as the Senate returning to a more collegial environment.

His Floor Speech. Some Democratic senators had to dig deep to justify their vote against Kavanaugh. For example, Ohio Sen. Sherrod Brown: "While I've already announced my opposition to Kavanaugh because he has sided with corporations over workers and Wall Street over consumers, I strongly supported a thorough investigation and I believe the FBI should have been allowed to do its job without political pressure or restrictions"

"This confirmation debate could have, and should have, unfolded very differently. The process has become poisonous and it's up to us in this chamber to change it. It's going to take a while for the Senate and the country to heal from this ugly ordeal. But for now, let me make a modest suggestion. Let's take a step back from the brink.

"Let's listen to each other. Let's argue passionately but let's lower the volume. Let's treat disagreements like disagreements, not as proof that our opponents are bad people. Let's see if we can glorify quiet cooperation—at least every once in a while—instead of loud confrontation. Some may say this is trite or naive. But my colleagues, we have crossed all these lines in recent weeks. And for the state of this institution and the country we have to step back from the brink and do better."

"The way this process has unfolded risks candidates with the kind of qualifications and character we would all want deciding to think twice before entering into public service. If the new normal is eleventh hour accusations, toxic rhetoric like calling a candidate â€˜evil,' and those of us who support him â€˜complicit in evil,' and guilt without any corroborating evidence, who would choose to go through that? How many good public servants have we possibly already turned away by this display? How many more will we turn away if we let uncorroborated allegations tarnish the career of a person who has dedicated 25 of the past 28 years to public service—and done so with honor?

"These are questions the Senate is going to have to grapple with for possibly years to come—but, again, right now I want to focus on something that hasn't gotten as much attention in the past couple of weeks: and that is what is known."

Dignified — and to the heart of the matter.

His Time With Collins. Portman's floor statement sounds much like that of Susan Collins'.

Shortly before Collins took to the floor, while Colorado Sen. Cory Gardner was having his say, Portman reportedly whispered something in her ear.

Two days prior to her dramatic speech, Portman met with Collins for about 45 minutes. The following day, he was spotted escorting her out of the secure room at the Capitol Visitors Center, after reviewing the final FBI report on Kavanaugh allegations.

Portman served two functions in securing Collins' vote. First, as a veteran of the Bush 43 White House (director of OMB and head of USTR), he could vouch for Kavanaugh's character. Second, given his quiet demeanor, Portman could be the velvet glove to Senate Majority Leader Mitch McConnell's iron fist.

Alaska Sen. Lisa Murkowski was the lone Republican to vote against Kavanaugh — not a surprise, as she's long been a thorn in McConnell's side (it goes back to 2010, when Murkowski lost her state's GOP primary, then defied the Leader by running and winning a write-in candidacy in the fall election).

Collins and McConnell likewise are on shaky ground (some of it having to do with a promise to stabilize Obamacare premiums). Without Portman as the go-between, does Collins vote differently on Kavanaugh?

Let The Healing Begin. McConnell wants the world to believe that "nothing is irreparably damaged"  in his chamber.

The reality is senators will have to figure new alliances — and not just because the Kavanaugh confirmation is over, but also because John McCain has passed away.

One might have assumed the McCain comity torch would have passed to his good friend, South Carolina Sen. Lindsey Graham. At last report, Graham was vowing to take the fight "to the street" to punish those senators who tried and failed to scuttle Kavanaugh's nomination.

Mitt Romney might step in and fill the McCain void in 2019, assuming he's elected to replace Utah Sen. Orrin Hatch. And he'd come to Washington with two McCain-like assets: a national following and media flocking to him (trying to create Trump drama, no doubt). But Romney will be a newcomer to the chamber, getting to know his away around the Senate in 2019.

Rob Portman is not to be confused with the late John McCain as a political maverick. However, he does have a calm demeanor and good standing to reach out to the loyal opposition — in Portman's words: "lower the volume".

The question: if Portman tried to be a peacemaker, would he find any willing takers across the aisle?