\ Dems' treatment of Kavanaugh was depraved. America won't reward them at the polls - Marc A. Thiessen

Dems' treatment of Kavanaugh was depraved. America won't reward them at the polls 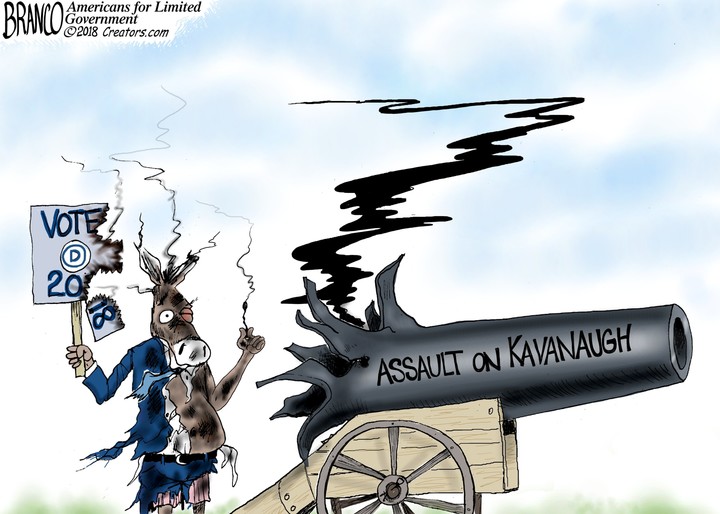 Just a few weeks ago, analysts thought that control of the U.S. Senate was in play this November and that momentum was shifting to the Democrats. Thanks to their brutal campaign of character assassination against now-Justice Brett Kavanaugh, those chances appear to be slipping away.

Case in point is Tennessee, where Republican Rep. Marsha Blackburn was struggling in her Senate race against popular former Democratic governor Phil Bredesen. In mid-September -- after the first Kavanaugh confirmation hearings -- a CNN poll showed Blackburn trailing by five points (in a state Donald Trump won by 26 points).

But as the ferocity of the attacks on Kavanaugh grew, so did Blackburn's poll numbers. By early October -- after Christine Blasey Ford testified and Kavanaugh was accused of exposing himself to a college classmate and participating in high school gang rapes -- a CBS News poll showed that Blackburn had pulled ahead by eight points. And last week, after Kavanaugh was finally confirmed amid scenes of angry protesters banging on the doors of the Supreme Court, a New York Times poll showed Blackburn leading by 14 points. That is a shift of 19 points in one month.

In other words, the Democrats' smear campaign of uncorroborated sexual misconduct allegations against Kavanaugh has united Tennessee Republicans behind Blackburn and poured cold water on Democrats' chances in the Volunteer State. And rightly so. It probably didn't help with Tennessee voters that Democrats excoriated Kavanaugh for his high school drinking and for inside jokes in his high school yearbook -- as if being a beer-drinking jock was some sort of crime.

Worse, Kavanaugh was publicly branded a sex offender for accusations decades old and uncorroborated by any witnesses or evidence. A man's good name was being destroyed. The treatment of Kavanaugh wasn't fair, just or right. And it backfired. Politico reports that retiring Sen. Bob Corker, R-Tenn., told Senate Minority Leader Charles Schumer, D-N.Y., that Democrats' attacks on Kavanaugh hurt Bredesen badly. Bredesen clearly saw the impact the Kavanaugh fiasco was having on his support among Republican voters he needed to win, because he tried to cauterize the bleeding by coming out at the last moment in support of Kavanaugh's confirmation.

But while his endorsement did not mollify angry Republicans, it enraged many of his Democratic supporters. The super PAC Priorities USA said it would not support Bredesen, while MoveOn announced, "We're cancelling a planned six-figure digital video ad expenditure for Phil Bredesen in Tennessee due to his Kavanaugh position." Campaign volunteers have reportedly been bolting from his campaign.

The Kavanaugh fiasco crystallized the stakes for Tennessee Republicans, reminding them while they may like Bredesen, a vote for the Democrat is a vote to make Schumer majority leader. A Democratic takeover would be a game-changer, giving Schumer the power to block any more Trump Supreme Court nominees and put a halt to the president's transformation of the federal appeals courts. In the wake of the Kavanaugh fiasco, 58 percent of Tennessee voters say they want Republicans running the Senate.


So, Democrats may have blown a chance to pick up a seat in a deep-red state thanks to the blowback over their efforts to destroy Kavanaugh. As Sen. Lindsey O. Graham, R-S.C., so poignantly told Senate Democrats at the Kavanaugh hearing, "Boy, y'all want power. God, I hope you never get it. I hope the American people can see through this sham." It appears that the American people have.

With Tennessee slipping out of their grasp, the Democrats' chances of a Senate takeover are slipping as well. Among vulnerable Democrats, it looks as if Sen. Heidi Heitkamp, D-N.D., is a goner. After the Kavanaugh hearings, her Republican opponent's lead expanded from four to 12 points. If she goes down, Democrats will need to pick up three GOP-held seats to win the majority. That does not appear to be happening, as races have shifted toward Republicans in Texas, Nevada and Arizona -- the states other than Tennessee where Democrats have pinned their hopes for flipping GOP-held seats.

There are three weeks before Election Day, so a lot could still happen. But if Democrats fail to take the Senate, they can thank their horrific treatment of Kavanaugh for what would amount to a double defeat -- securing a conservative majority not only on the Supreme Court but in the Senate as well. If so, they richly deserve it.

And hopefully they learn the right lesson: When you drag your party and your country down into the depths of political depravity, Americans will not reward you at the polls.