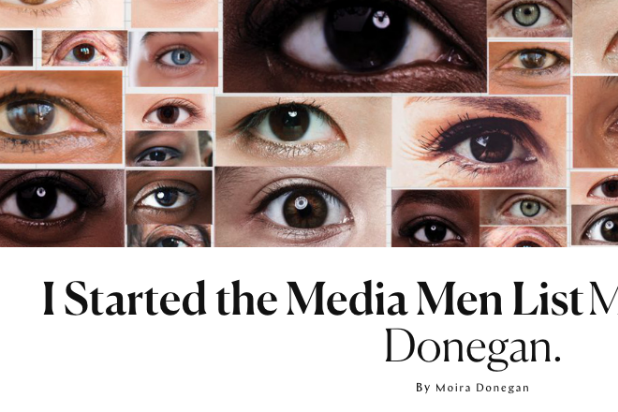 Stephen Elliott, a writer based in New Orleans, alleged to have committed various sexual misdeeds on a crowdsourced list of bad "Media Men" circulated a year ago, is suing the spreadsheet's creator, Moira Donegan.

The defamation lawsuit, filed Wednesday in the U.S. District Court for the Eastern District of New York, marks a new chapter in the early flash point of the #MeToo movement. The suit appears to be the first legal action pursued by a man named in the document, which opened a debate about anonymity, self-protection and the Web as the prevalence of sexual misconduct became a focus of national attention.

As the Google spreadsheet tore through the internet on Oct. 11, 2017, its cells bulged to fit anonymous accounts of misbehavior by men working in journalism and publishing. Within 12 hours, Donegan, a former editor for the New Republic, took the document offline as BuzzFeed prepared to publish an article on its contents.

But the list had already been populated with the names of more than 70 men. They ranged in age from their 20s to their 60s. More than a dozen had been marked with red highlighting, denoting accusations of "physical sexual violence by multiple women." One of them was Elliott, whose alleged wrongdoings included rape, sexual harassment, coercion and unsolicited invitations to his apartment.

He is now seeking at least $1.5 million in damages from Donegan, and threatening to expose up to 30 yet-unknown "Jane Does" who edited or publicized the spreadsheet.

One of Elliott's attorneys, Andrew Miltenberg, has become a prominent lawyer for men seeking to fend off allegations of sexual assault, particularly on campus. His clients have included Paul Nungesser, the Columbia University student accused by his classmate, Emma Sulkowicz, of rape, and Alec Klein, the former Northwestern journalism professor - also formerly of The Washington Post - accused of misconduct by students and staff on the Evanston, Illinois, campus.

A defamation claim is difficult to prove in a court of law, which requires that what was said or written be proven without a doubt to be false, and that the false statement is causing actual harm. It's even more challenging if the plaintiff is a public figure, in which case he'll have to show that the defendant acted knowing the accusation to be false or in "reckless disregard" of the truth. While Elliott contends he is not a public figure, the lawsuit claims that the defendants knew the allegations against him were false because of his well-documented sexual preferences. And it details the personal and professional difficulties he encountered. It recounts how he contemplated suicide and enrolled in therapy as friends and family members shunned him. It says professional opportunities dried up.

"He attributed this to the false allegations recently published in the List in which he was falsely accused of being a rapist," the suit maintains.

Donegan, a writer based in New York, on Thursday reposted an essay on Twitter that she had written for New York Magazine's the Cut about the list and its reception.

"I Started the Media Men List," revealed the headline on the January 2018 essay. "My name is Moira Donegan."

The piece responded to growing speculation about the origins of the list, which became a cause celebre in media circles, as rumors circulated that Harper's Magazine was planning to name Donegan as the effort's initiator. The article in the March 2018 issue, written by Katie Roiphe, lamented "Twitter feminism" and likened the list of media figures said to have misbehaved to an "anonymously crowdsourced list of Muslims." Several prominent men on the list, including Ryan Lizza of the New Yorker and Leon Wieseltier of the New Republic and then the Atlantic, eventually lost their jobs.

Donegan said there were also repercussions for her. She lost friends, as well as an unspecified job, in the weeks after the spreadsheet was exposed, she wrote in the Cut. She acknowledged "pitfalls," saying the list was "indeed vulnerable to false accusations" - a concern that led her to add a disclaimer at the top advising, "This document is only a collection of misconduct allegations and rumors. Take everything with a grain of salt." The document was labeled "a collection of misconduct allegations and rumors."

But she defended her decision to create the spreadsheet, saying it wasn't intended for mass consumption but rather as "a place for women to share their stories of harassment and assault without being needlessly discredited or judged.

"The hope was to create an alternate avenue to report this kind of behavior and warn others without fear of retaliation," she wrote. "Too often, for someone looking to report an incident or to make habitual behavior stop, all the available options are bad ones."

While critics warned that whisper networks denied the accused due process, others raised different concerns. Sarah Jeong, the tech writer whose own online behavior has been a source of controversy, noted in the Verge that these networks could also injure victims. She described a "double-edged sword: the same secrecy that protects victims and whistleblowers can shield perpetrators as well." She also observed that the list was overbroad, "collecting stories that ranged from incredibly violent sexual assaults to unwanted workplace overtures, a mixture of allegations that . . . felt, to some, a little odd to be mixed together."

Some prominent voices came to Donegan's defense. Samantha Bee, the host of "Full Frontal with Samantha Bee," said the spreadsheet fulfilled the central purpose of the social movement against sexual violence. "The list also let women know that they weren't alone, you know, the whole 'me too' component."

"If we go public with a story, we're petty crybabies hellbent on destroying men's careers. If we write a secret list to protect each other, we're gossipy shrews telling lies in the shadows," Bee said, suggesting a Catch-22

The suit takes aim at additional contributors to the list, whose identities Elliott intends to expose using I.P. addresses and email accounts that could reveal their true names and addresses, the filing asserts. He is pledging to subpoena "shared Google spreadsheet metadata" to obtain this information, according to the suit.

In addition to monetary damages, Elliott is asking the court to compel a written retraction of all "false and defamatory statements."

The suit follows closely on the publication of a personal essay by Elliott in Quillette, an online magazine based in Sydney, Australia. In the September piece, titled "How An Anonymous Accusation Derailed My Life," he argued that anonymity undermined the aims of the #MeToo movement.

"#MeToo was an expression of solidarity but there is no solidarity for the accused," he wrote. "We don't talk to one another. We assume that if someone else has been accused, there must be a good reason. We're afraid of guilt by association. We don't want to be noticed so we lower our voices. Most of us stop posting on social media and stick to ever-dwindling circles of friends."

He contended that people who enjoy only precarious employment, such as freelancers, are particularly vulnerable, as they have no access to a workplace investigation that might clear their name.

"Over the course of this year, I've come to believe that if a movement embraces anonymous lists and a presumption of guilt, it is already poisoned and not worth supporting," he noted.

The issue isn't going away. Last month, a collection of anonymous students at the University of Washington launched a website called "Make Them Scared," soliciting the names of men, within the school and beyond, who stood accused of sexual misconduct.

"It's the [Sh - ty] Media Men list, UW edition," observed an article in the Stranger, the alternative, biweekly newspaper in Seattle

The author of the site answered that it would be better to believe someone who had made a false accusation than to defend someone who had committed assault, suggesting, with little explanation, that these were the only two options.

"I made this site for one reason: to give survivors a voice, and to make it known to attackers that they can't keep getting away with this, that there is some entity out there, if not our legal system, if not our universities' administrations, that will hold them accountable for their actions," the person states.

In an editorial, the campus newspaper called the site a "symptom, not a solution."

Reflecting on the fracas over the spreadsheet, Donegan wrote in her January essay that what shocked her above all was not the blowback but "the realization of how badly it was needed, how much more common the experience of sexual harassment or assault is than the opportunity to speak about it."

"I am still trying to grapple with this realization," she wrote.