Saudi Arabia and the ineptitude of monarchy 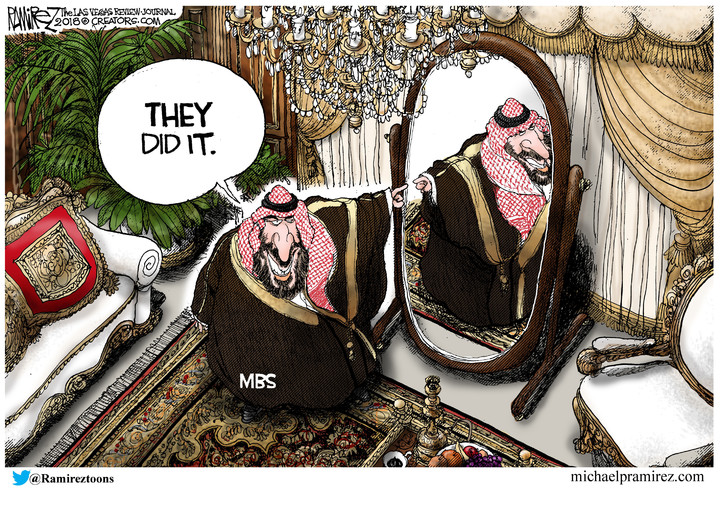 That's the logical implication of Saudi Arabia's emerging cover story for what the crown prince himself now publicly admits was a "heinous crime": The killing of Washington Post contributor Jamal Khashoggi at the Saudi consulate in Istanbul.

According to Foreign Minister Adel al-Jubeir, Khashoggi died in "an operation that was a rogue operation. This was an operation where individuals ended up exceeding the authorities and responsibilities they had. They made a mistake when they killed Jamal Khashoggi." An unnamed Saudi official described the killing to Reuters as a botched kidnapping that ended up with Khashoggi in a deadly "chokehold." Or maybe it devolved (according to other Saudi pronouncements) into a fatal "fistfight."

Whatever the details, the crown prince was totally ignorant that such a thing was even contemplated, the Saudis insist. And, per Jubeir, "even the senior leadership of our intelligence service was not aware of this."

That certainly doesn't say much for the intelligence capabilities of Mohammed's handpicked spy chiefs. Why, they even seem not to have noticed when a couple of jets owned by the government took off for Istanbul on the day of the crime, loaded with members of Mohammed's security detail and other ranking officials. Perhaps that, and not their failure to get the Khashoggi job done right, accounts for the firing of two of Mohammed's top intelligence deputies last week.

To be sure, even if this tale exonerates the crown prince of deliberate homicide, it indicts him for total mismanagement of his father's kingdom's affairs. Such are the trade-offs of leadership, apparently.

And such are the pitfalls of a governing system that not only does not discourage nepotism but also celebrates it. It's an obvious point but strangely does not get made very often: This is the sort of thing that can happen when a government chooses its leaders based on kinship, not ability, or even popularity, and has no mechanism of accountability more substantial than the monarch's favor.

No doubt the U.S. presidential election system is not the world's best advertisement for democracy at the moment, but at least it offers two off ramps for disastrous leadership - impeachment and a two-term limit - that Saudi Arabia could certainly use right now.

Mohammed, who owes his current position to nothing more than his father's wish that he have it, offered his purportedly earnest condemnation of the Khashoggi murder at an investment conference in Riyadh on Wednesday - the same event that many Americans and Europeans have boycotted in protest of the Khashoggi murder. Mohammed was accompanied, bizarrely, by Prime Minister Saad Hariri of Lebanon, who was detained a year ago in Saudi Arabia, in another operation no one believes could have occurred without the crown prince having ordered it, but that Harari, by his presence, and his docile applause for Mohammed, implicitly asked the world to forgive.

No one will succeed in using the Khashoggi case to drive a "wedge" between Turkey and Saudi Arabia, Mohammed declared, as a huge room full of Saudis cheered and clapped - because each one of them knew that, under their system, that was what they had better do.