If Mattis goes, Trump will miss him 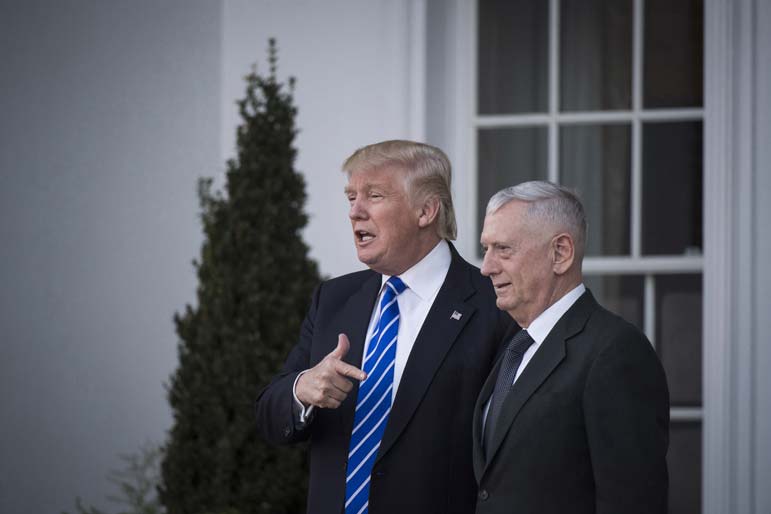 It took nearly two years, but President Donald Trump has finally said something unflattering about Secretary of Defense James Mattis. Rumors of the president's unhappiness with Mattis date back several months, yet only recently did Trump himself express any, telling "60 Minutes" that he thinks the retired four-star Marine general "is sort of a Democrat."

In another era, when retired generals gravitated toward the center, being called a Democrat by a Republican president would be worth its weight in Sunday talk-show invitations. In Trump's Washington, the remark is the kiss of death. So it's worth asking why Trump thinks his secretary of defense is on the other team.

From the beginning of Trump's presidency, much of Washington saw Mattis as a kind of guardrail. When the Trump transition team floated his name in November 2016, there was a palpable sense of relief at a national security forum I was then attending. Democratic and Republican lawmakers praised the pick.

It was easy to see why. Mattis is a consummate military professional. In 2016, when so many former senior national security officials chose sides, his politics remained inscrutable. Mattis let it be known that he thought Iran still needed to be deterred and that America should not fight wars unless the American people were willing to commit the resources needed to win them. He had devoted a lot of his time to studying the transition of soldiers to civilian life, and believed that national service should not be a partisan matter.

So it's not surprising that Mattis sought to build a bipartisan team at the Pentagon. The most obvious example was his courting of Michele Flournoy, who almost certainly would have been Hillary Clinton's secretary of defense, to be his deputy. In the end Flournoy declined - but Trump loyalists noticed the courtship. As one White House official told me at the time, Trump did not understand why Mattis would want to bring in someone so close to Clinton.

Mattis clashed with the White House on other key posts as well. In some cases he wanted to bring in Republican defense policy hands who had signed letters in 2016 denouncing Trump. But the White House made it clear that "never Trumpers" had no place in the administration.

Another factor in Trump's mistrust of Mattis is policy. Trump campaigned against the Iran nuclear deal even before he became president. Yet Mattis counseled against withdrawal, supporting the strategy of then-National Security Adviser H.R. McMaster to fix the agreement, not abandon it.

Mattis's reputation as one of the adults in the room is well known: He has been a key voice calming allies in NATO. He managed to soften Trump's initial ban on transgender Americans serving in the military. He was one of the people who persuaded Trump to embrace a strategy of keeping troops in Afghanistan to fight for the elected government in Kabul.

It is not unusual for a president and members of his Cabinet to have differences of opinion. At times, however, Mattis has seemed like he was managing the president as much as the Pentagon. In Bob Woodward's latest book, for example, he writes that Mattis did not present Trump with robust options for a military strike on Syria in 2017, after the U.S. had concluded that the regime had ordered a chemical weapons attack. Mattis and the Pentagon "wanted to keep the attack as narrow as possible," Woodward writes. After the book came out, Mattis denied ever questioning Trump's sanity and disputed other details as well.

At the time, Trump made a show of saying how much he appreciated that statement. Now he says he doesn't know if Mattis will remain in his Cabinet. In some ways, Trump sounds a little like the officials in the previous administration who saw Mattis as too aggressive on Iran. President Barack Obama ended up shoving Mattis out of his post as commander of U.S. Central Command a year early.

Trump is well within his rights, of course, to hire a secretary of defense that will more enthusiastically implement his policies. But Trump should also appreciate that the man who currently has the job is one of the few remaining public figures in America who has the trust of both parties. Trump may find that irritating, but it will help him in the next crisis.