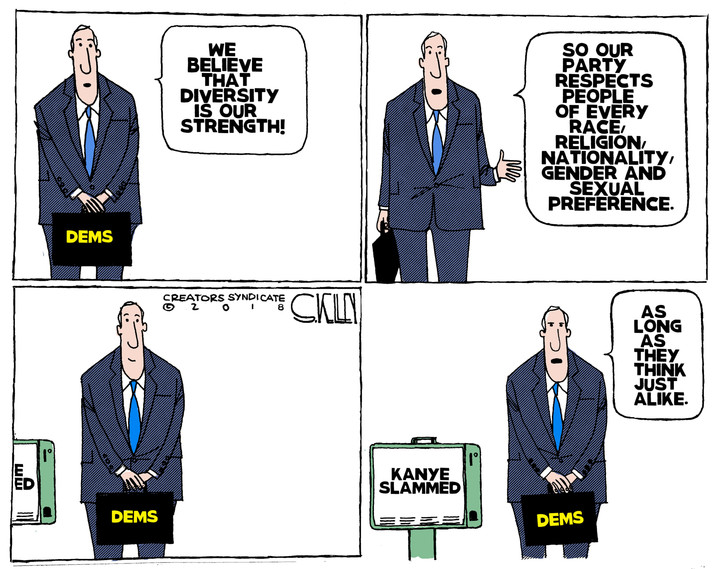 When condemned a Republican president after Hurricane Katrina smashed , and their media biscuit eaters weren't all that upset.

Many were overjoyed that West, the megastar from and internationally known hip-hop artist, was on their side.

He served their politics, and they loved him for it.

But as most of you know, Kanye met with President at the the other day. He wore a red MAGA hat and praised the president. He hugged Trump.

The reaction from and their handmaidens of the wasn't love. It was slobbering rage.

One of the attackers was academic . "This is white supremacy by ventriloquism," said Dyson, sputtering in rage on pro-left . "A black mouth is moving, but white racist ideals are flowing from Kanye's mouth."

And said: "What I saw was a minstrel show today -- him in front of all these white people ..."

There was another in the room with Kanye to support Trump: , the running back, the greatest athlete of his time, a man who was strong, indomitable, proud, and now humbled by age and using a cane.

But cane or no cane, I'd pay real money to see Lemon and Dyson accuse Brown to his face of being part of a minstrel show or a ventriloquist dummy.

Brown's reaction would be fascinating. But I bet Lemon and Dyson wouldn't like it.

Kanye's long monologue, carried on national television, was a bizarre stream of consciousness. Some of it was wacky.

Kanye talked about parallel universes, and alternate realities, and his hope that Trump would pardon notorious Chicago Gangster Disciple gang leader to help stop the killings in .

But Kanye also talked about the Democratic welfare state that has destroyed the black family, leaving generations of young men to grow up alone and fatherless.

Since the meeting, we've heard a lot of irrational screaming about West and how he's insane for speaking his mind.

One thing is certain. Americans make too much of celebrities. stars endorse for president and it is considered normal behavior.

But Kanye embraces Trump -- and gives him a hug -- and hate him.

Because there is nothing so threatening to the Democratic Party than a prominent like Kanye straying from the Democratic plantation and embracing a Republican.

This they cannot abide. use racial identity politics to herd voters and keep blacks voting Democratic. Without black votes, there is no Democratic Party.

Similar shaming techniques have been tried on other African-Americans, from brilliant writers such as ; from famous economists and ; and from Associate Justice to former Secretary of State .

Each of them, in one way or another, had their "black card" revoked by the high media priests or priestesses who decide such things. Each was reviled, his or her authenticity questioned, condemned by some as race traitors.

But in the process, the inquisitors reveal themselves.

Because it becomes clear that what's important is not the content of one's character, but how the color of one's skin determines how one must vote. Those who use skin pigment to inform their politics are threatened by Kanye.

It's unfortunate that millions of young people don't idolize Williams or Sowell or the others I mentioned.

But young people do idolize Kanye. And can't allow these young people to realize what Democratic policies have done to the cities, from failing schools to tax policies that drive off the private investment that would rebuild devastated neighborhoods and bring jobs.

So, they shame Kanye and call him a minstrel.

This ugly business of deciding who gets to keep their "black card" of authenticity reminds me of another young political figure in .

Kanye may remember him too.


Years ago, this other young , a Democrat, dared to challenge a South Side politician, Rep. , for re-election.

Rush had been a former Black Panther militant. But as he aged, Rush became a go-along-get-along guy, a soldier Democratic organization controlled by two white guys: then-Mayor and Speaker of the of Representatives .