The Brett Kavanaugh circus is over. We won't forget your sins, Matt Damon 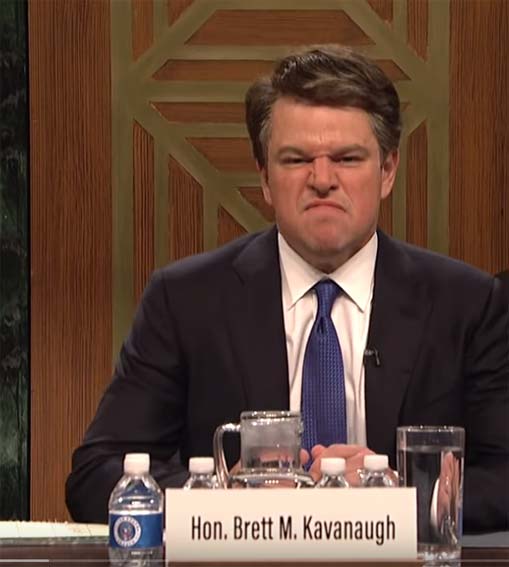 Sadly, Damon will most likely be just a footnote, some jester in motley, participating in the American political circus.

It is that circus in which Kavanaugh, a man of exemplary public reputation, has had his honor stripped by the political left, accused without evidence or corroboration, as a high school sexual predator, a gang rapist, a drunken bully and boor.

If Damon is remembered at all in this, it will be for a bit part, his mimicry of Kavanaugh on "Saturday Night Live," in a performance that didn't wow the critics.

"I'm not backing down you sons of bitches, I don't know the meaning of the word stop," Damon said as Kavanaugh to the show's "Senate Judiciary Committee."

"To quote my hero, Clint Eastwood's character in āGran Torino,'" said Damon/Kavanaugh, "āGet the hell off my lawn.'

There was great laughter and appreciation that Damon had joined the Kavanaugh scalp hunt. Yet underneath the performance was something oily and desperate, something extremely revealing about our culture, something modern.

His friendship with and defense of his patron, Hollywood sexual predator Harvey Weinstein, who unlike Kavanaugh has been credibly charged and disgraced.

Damon also is famous for his onscreen portrayal of an iconic movie archetype, the stoic superhero assassin Jason Bourne.

And there he was on "SNL," dressed in a blue suit like Kavanaugh, nervously drinking water like Kavanaugh at the hearing, making a fool of the man.

It doesn't tell us much about "SNL," which calls itself a comedy show but now functions to reinforce liberal political sensibilities.

But it does tell us about our culture, how sick it has become, and what it demands of penitents.

Unless you've been living as a hermit through the summer, you know what Democrats have done to Kavanaugh. He's spent more than a decade as a distinguished federal judge.

His past has been thoroughly examined by at least six FBI background checks (now seven). And years ago, as a member of special prosecutor Ken Starr's team investigating then-President Bill Clinton, Kavanaugh was subject to the intense scrutiny of Clinton opposition researchers. They didn't find anything on him.

But over the past several weeks, Kavanaugh has been smeared on allegations without evidence. His reputation has been ruined beyond repair, and not only his own, but those of his wife and two young daughters.

When Kavanaugh tried to fight back — in the very scene Damon was brought in to mock on "SNL" — his detractors insisted that his public anger had disqualified him from the high court.

What America has witnessed was the rule of the mob, uncorroborated and wild accusations offered without proof, yet reported endlessly and breathlessly by the Democratic Media Complex.

America also witnessed what is fueling what may be an anti-Democratic backlash before the November midterm elections:

That founding American principles that formed the bedrock of civil society — like the presumption of innocence and the rights of the accused — were swept away by Senate Democrats and the media, to satisfy their politics.

And into this stepped Matt Damon, avatar of the modern man.


This relationship with Weinstein led Damon to a series of starring movie roles including that of the iconic assassin, Jason Bourne.

Like many American movie heroes, even those played by Eastwood, Damon's Bourne is a man alone, stoic, laconic, driven, disciplined.

Bourne respects women. Bourne kills without hesitation. He hunts the Deep State that created him. Bourne can knock out tough thugs with one left hook, then gently wash his girlfriend's hair.

But in real life, or at least Hollywood life, when Weinstein came under attack for the sleazy way he treated women, Damon came to his defense.

On an ABC show "Popcorn," Damon sought to mitigate the anti-Weinstein anger of the #MeToo movement that was ending Weinstein's career.

Damon said all men accused of sexual harassment and assault shouldn't be mixed together, "because there's a difference between, you know, patting someone on the butt and rape or child molestation, right? Both of those behaviors need to be confronted and eradicated without question, but they shouldn't be conflated, right?"

The reaction was swift and devastating. Alyssa Milano — a #MeToo leader who was a presence during the Kavanaugh hearings as a guest of anti-Kavanaugh Sen. Diane Feinstein — ripped Damon's head off in a series of tweets. Other women joined in and #MeToo went Matt Damon hunting.

How Damon arranged his appearance on "SNL" to mock Kavanaugh and begin his rehabilitation doesn't interest me.

But it was obvious what he was doing. He was covering himself, stripping Kavanaugh's skin to save his own as the audience laughed in approval.

He wasn't playing Kavanaugh as much as another archetypal character, the one that is pointing fingers at the accused, to shield himself.

You could easily see Damon playing in a movie set in medieval England, a simple frightened yeoman testifying against a witch:

"M'lord, I saw the accused, this woman walk widdershins thrice around the great tower and turn herself into a black swan!"

And there on "SNL," I didn't see Matt Damon as much as I saw Jason Bourne, on his knees, begging forgiveness of sin, as the crowd laughed.