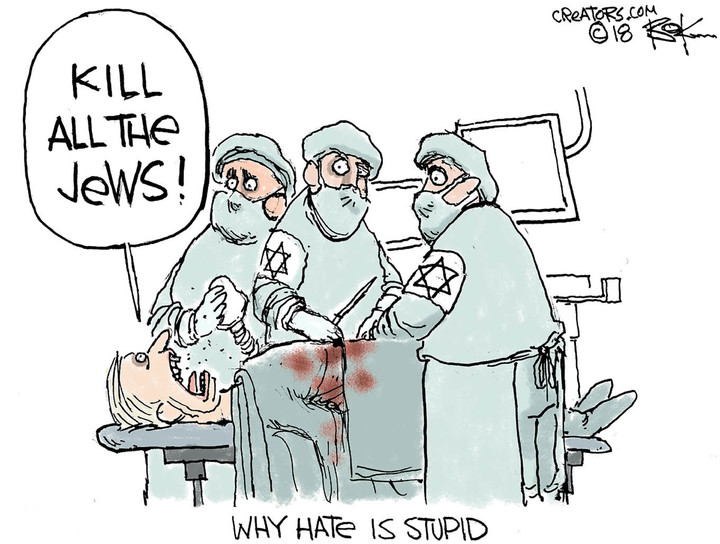 The man accused in the brutal killings of 11 people in a synagogue in Pittsburgh was taken to the hospital after he was apprehended to be treated for the injuries he suffered in a gunfight with the police.

In the emergency room when he arrived, he was shouting, "I want to kill all the Jews," according to hospital's president.

If he only knew then about the identity of the team tasked with keeping him alive: at least three of the doctors and nurses who cared for him at the Allegheny General Hospital were Jewish, according to president Jeffrey K. Cohen.

Cohen's simple and unapologetic description of how Bowers came to be treated fairly and impartially by the very people he had supposedly hated has traveled quickly around the world.

Perhaps it is a stark reminder that there is something more powerful than caring only for one's own. Perhaps it was Cohen's radical demonstration of humanity in an era increasingly marked by naked partisanship and tribalism. Either way the story has resonated; Cohen has been interviewed by CNN, Britain's Channel 4 News, ABC and others.

"I thought it was important to at least talk to him and meet him," Cohen told ABC. "You can't on one hand say we should talk to each other, and then I don't talk to him. So you lead by example, and I'm the leader of the hospital."

The exact nature of Bowers's injuries are not immediately clear, though he appeared in court in a wheelchair on Monday. Cohen, citing patient privacy laws, declined to give specifics about Bowers's condition and treatment.

But Cohen told reporters that two of the practitioners who treated Bowers when he arrived at the hospital were Jewish: the attending emergency room doctor and a nurse, whose father is a rabbi.

"I will tell you that I'm very proud of them," he said of his staff. "They did a great job. They answered the bell."

He described talking to the nurse after the man treated Bowers. The two were in tears, Cohen said.

"He was pretty broken," Cohen told the Pittsburgh Tribune-Review. "I told him how proud I was. He went home and hugged his parents."

Cohen is personally connected to the shooting beyond his role at the hospital. He lives so close to Tree of Life synagogue that he heard the gunshots as the massacre unfolded. He knew nine of the people who were killed, he told the Tribune-Review.

Still that didn't stop him from going to check in on Bowers to ask him whether he was in pain. The man said he was fine.

"He asked me who I was, I said 'I'm Dr. Cohen, the president of the hospital,' " Cohen said. "And I turned around and left. And the FBI agent that was guarding him said, 'I don't know that I could have done that.' "

Bowers, who is charged with 29 counts of federal crimes for violence- and firearms-related offenses, may face the death penalty if he is convicted. The massacre has drawn some unfortunate parallels with the murder of nine African Americans at a South Carolina church in 2015. That man, Dylann Roof, was motivated by a deep racial animus - something Bowers appears to share with him.

Cohen's calm was reminiscent of the actions of the churchgoers after Roof's massacre, with some telling Roof during a tense hearing held just days after the killing that they forgave him. Cohen said he was inspired by the grace that congregation had showed.

"I think that at some point the anger will die down, the process will unfold, and we might be able to get to the point where we could do what they did," he told Pittsburgh's Action 4 News. "I hope they could teach us."

Cohen said he saw Bowers as the product and not the originator of larger problems: "All the chaos that's going on."

"The gentlemen didn't appear to be a member of the MENSA society," he told CNN. "He listens to the noise, he hears the noise, the noise was telling him his people were being slaughtered. He thought it was time to rise up and do something. He's completely confused."

Baseless conspiracy theories with anti-Semitic undertones have been circulating in right-wing media circles - bubbling up all the way to the feeds of a prominent Fox News host and a Republican congressman - that the migrant caravan at the border was orchestrated by liberal groups and Jewish financier George Soros. Bowers had reposted several comments on a since-deactivated social media account about the "third-world caravan" of approaching "invaders."

Cohen saved his harsh words for the people he said are responsible for the toxic climate in the country.

"It's time for leaders to lead," he said. "And the words mean things. And the words are leading to people doing things like this and I find it appalling."